The USDA increased winter wheat acreage for the 2022 crop year. The USDA pegged all winter wheat acreage at 34.4 million acres. This was up 800,000 acres from last year, and the highest acre total for winter wheat since 2016. Though acres have been on the increase the past couple of years, historically, this number is overall the 10th lowest acre total on record. The increased acre numbers, as well as a larger than anticipated global wheat supply kept wheat prices under pressure on Wednesday after the release of the report. The focus shifts back to the weather, as the southern plains remain dry, and overall question regarding the condition of the wheat crop will be in focus as the crop looks to break dormancy. 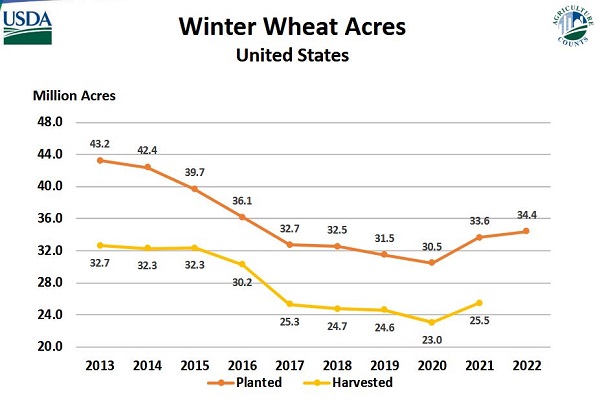 CORN HIGHLIGHTS: Corn futures traded higher and lower and by day’s end finished mixed with March futures losing 2-0 cents to close at 5.99 and December gaining 0-3/4 to finish at 5.58-1/4. Today’s much anticipated reports were uneventful with line-item adjustments and carryout gaining 47 mb to 1540 bb. On an interesting note, December 23 closed 6-3/4 higher at 5.34-1/4, gaining near 30 cents since the first of the year.

The quarterly stocks report was also released and there again, no significant changes. Corn stored in all positions on December 1, 2021, totaled 11.6 billion bushels. This was up 3 percent from December 1, 2020. 7.23 billion bushels are stored on farms and off farm stored bushels are estimated at 4.41 bb. The September – November 2021 usage is 4.70 billion bushels, compared with 4.74 billion bushels a year ago. The world projected ending stocks was slightly lower than last month’s 305.54 mmt versus today’s estimate at 303.7. This compares to the 2020/21 figure of 292.23 mmt. Since today’s USDA report didn’t contain any unexpected changes beyond reason, the market will focus its attention on South America and crop prospects. Today’s estimate of the Brazil corn crop dropped 3 mmt from last month to 115 mmt. Argentina corn dropped to 54 mmt from last months 54.5. The weakness in March corn versus back months may be reflective of a 4 million bushel slower grind figures this past week as noted on today’s Ethanol Production report.

SOYBEAN HIGHLIGHTS: Soybean futures gained 12 to 14 cents on supportive projected world carry-out numbers. The US Supply and Demand as well as the Quarterly Stocks report were considered non-events. World carry-out dropped from 102 mmt to 95.2 (- 6.67%) and considered supportive for price as are stressed crops in parts of South America. Brazil’s production was dropped 5 mmt to 139 mmt and Argentina’s declined 3 mmt to 46.5 mmt.

There were a few line items adjustments for the US crop but in the end, carryout only changed 10 mb up to 350 mb. There was some talk carryout might exceed 400 mb. Yield increased from 51.2 bu/acre to 51.4. Historically the January report can be one of the more volatile, yet today’s numbers and trade activity did not reflect this. Moving forward the market will pay key attention to southern hemisphere crop prospects. Sharply higher soymeal prices are reflective of growing concern the US could capture more exports as projected supply in Argentina may decline. This has already been factored in by sharply higher soymeal prices over the last 30 days. Perhaps the big key today was what the report didn’t say. There were no major bombshells and consequently the market, late in the session, appeared to be taking more of an offensive bias concerning itself with net drying and warm conditions in northern Argentina, southern Brazil, as well as Paraguay.

All eyes today were on report data, which turned out to be mostly neutral overall, but slightly bearish for wheat. Despite the technical correction over the past three sessions, wheat was already trading lower ahead of the report. Though no major changes accompanied the release, exports were reduced from 840 mb to 825 mb and carryout was consequently increased to 628 mb from 598 mb. This was mostly in line with expectations, but bearish for the market nonetheless. Feed demand was also reduced to 110 mb from 135 mb. Yield was left unchanged at 44.3 bpa and production was also unchanged at 1,646 mb. The winter wheat seedings report stated all winter wheat a bit higher than expected at 34.4 million acres (vs 34.1). Paris milling wheat futures also posted losses today and Argentina’s crop estimate was increased to 20.5 mmt. On the news front, Iraq’s tender results are expected Thursday. 500,000 mt of wheat may be purchased with the possibility that some will be sourced from the US. In Russia the export tax is now near $100 per metric ton in an effort to reduce their domestic food prices. This is also pricing them out of possible tenders, which could be bullish for US export demand. Also bullish for US wheat is the continued threat of drought across the southern plains.