The CME and Total Farm Marketing offices will be closed Monday, January 17, 2022 in observance of Martin Luther King Jr.

The U.S dollar index (UDX) broke support levels this week, trading to its lowest levels since early November, and fresh two-month lows.  The current move lower looks to have the UDX possibly challenging 2021 highs, near the 93.40 levels.  Starting with the jobs report last week, rounds of disappointing U.S. economic data has brought sellers into the UDX, as money has flowed into competing currencies.  Further selling pressure came this week as monthly consumer inflation data was less than expected.  The UDX may be trending lower in the near-term, but the market will be closely watching the tone of the Fed and possible policy changes to tighten the available money supply.  The Fed recently announced tightening procedures through the next year to help curb inflationary pressures.  Over the next handful on months, the actions of the dollar will likely have an indirect impact on the commodity and equity markets. 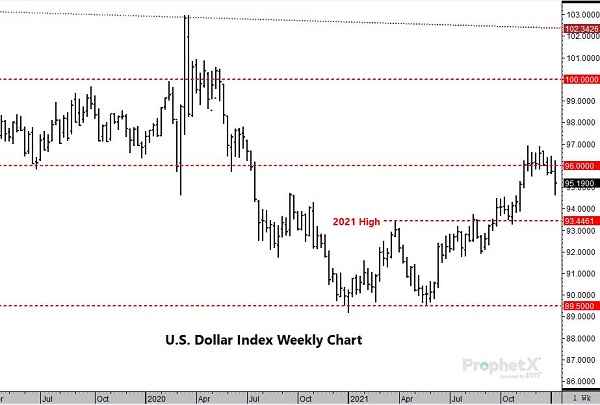 CORN HIGHLIGHTS: Corn futures ended the day on a strong note, gaining 8-3/4 cents in March and 0-1/2 in December. March closed at 5.96-1/4, down 10-1/2 cents on the week. A moderating forecast for the next week in northern Argentina and Brazil suggests a cool down in temperatures and increased chances of rain. Today’s firmer close on the front months reflected slower farmer selling and some question as to rainfall totals for southern Brazil. The technical picture looked questionable coming into today after yesterday’s USDA reports increased carryout 47 mb to 1.540 bb.

Futures lost ground on the week; however, they were able to stay in their recent range. A slow export pace of late, but strong, ethanol usage has been a feature in recent weeks. This was also reflected on this week’s Supply and Demand report. Focus moving forward will be mostly on crop conditions in South America. A sale of just over 100,000 mt to Mexico was also viewed as supportive. The Buenos Aires Grain Exchange rated the Argentine crop as 23% good to excellent down from 40% last week.

A slower export pace and word today that China imports for the previous year were down 3.5% is likely a reflection of higher prices creating an environment of smaller demand. The old saying is “high prices cure high prices”. While that is mostly true, there is an autonomous amount of demand, which means almost regardless of price and users will buy. We feel that South American weather has been challenging enough that end using countries may be at the ready to strongly and purchase big volume, yet we’re not seeing that activity yet. High prices generally encourage a just in time inventory approach and that still appears to be the case with soybeans. Soybean meal lost 3.00 to 5.00 as rains in Argentina may stabilize or help to improve the crop in the week ahead. The big question is whether or not these rains will be short lived and adequate. Some forecasters are suggesting beyond next week the overall trend remains warmer and drier.

Fresh bullish news regarding wheat has simply been in short supply lately, and that is weighing on the market. In fact, the bearish tone set by Wednesday’s USDA report still seems to be lingering along with several factors that are pushing prices downward. Poor exports, record harvests in Australia and Argentina, and lower Paris milling futures are all adding pressure. Even the weather in the US southern plains, which remains mostly dry, seems to have been ignored by the market, with KC taking a bigger hit than Chi today. There is a snowstorm moving across the central US over the next few days from the north to the southeast. Despite areas like Kansas and Nebraska getting some of this precipitation, dryness will persist in that region. From a technical point of view, momentum is downwards as well. All three classes are what could be considered oversold according to stochastics, and due for a technical correction. However, during periods of strong downtrend, a commodity can become and remain oversold for extended periods of time.

CATTLE HIGHLIGHTS: Cattle prices are trying to turn higher, as the market posted modest gains to end the week.  Optimism of an improving slaughter picture and good demand help support the market.  Feb cattle gained .975 to 137.975, and April cattle were 1.150 higher to 142.125. For the week, April cattle traded slightly higher, gaining .075 on the week.  Feeders saw mixed trade as March feeders lost .350 to 166.375. For the week, March feeders lost .300.

The cattle market stays in consolidation trade on top of key support levels, working a narrow range.  Trendline support held April live cattle around the $140 level, and resistance at $142, kept prices in check this afternoon.  Prices are looking for directions, but with the near-term trend working lower, a possible break to the down side is still a possibility.   The recent spike in COVID cases has pressured the cattle market on its impacts of cattle numbers and supply chain, but the market is more optimistic that this will be a short-term issue.  Cash trade was done for the week. Light cash trade occurred this week with a range of $136-$138 catching most trade.  This is $1-2 lower than last week and disappointing.  Beef carcasses maintains its trend higher.  At midday with Choice carcasses added 1.92 to 284.78 and Select was .48 firmer to 273.24. Load count was light at 49 loads.  At midday, Choice carcasses were trading over $10.00 higher than Monday’s close.  Lighter slaughter numbers may be triggering a product shortage, and with demand tone strong, helping to lift retail values.  Estimated cattle slaughter for today 113,000 head. There is some optimism that this trend may be hitting its low, and cattle slaughter numbers will pick up next week.   The firmness in Live cattle, and mixed grain trade kept the feeder market searching for direction on the day.  January feeders expire on Jan 27th , and are closely tied to the cash index.  The Feeder index was .20 lower to 162.01.  The cattle market is still trending higher overall, but near-term, prices are in a consolidation pattern looking for a reason to move either higher or lower.

Hog futures gapped higher on the open, and technical buying pulled money into the market, turning charts around  on Friday’s trade.  Chart improved technically as prices were trading well off the lows for the week. Follow through support will be the key going to next week.  Slaughter numbers are still trending lower as estimated slaughter today was 438,000 head, down nearly 15,000 from last week.  There is optimism that the COVID issues and plant speed may be a short-term effect on the slaughter pace, bring optimism that hog slaughter pace can return.  The cash hog market values on midday direct trade were 3.21 lower than yesterday, as the cash market failed to participate in the rally. The Lean Hog Index traded lower, slipping .46 to 74.60, and still holding a 6.300 discount to the futures. The spread will likely limit the near-term upside in the futures market.  Pork carcasses closed sharply higher on Thursday, helping support the jump in futures prices. At midday today, Pork carcasses were 4.3 lower to 91.15, but still trading $5.00 of Monday’s close. The load count was moderate to light at 238 midday loads. The deferred contracts are building some recovery of recent lows as prices moved back to challenging or passing the $100.00 level.  The longer term concern of a tight hog supply picture supports the longer-term market.

DAIRY HIGHLIGHTS: Class III milk capped off another volatile week with the February contract closing at $22.08, up 65 cents on the week. Futures traded within a nickel of the $23.00 mark on Thursday before turning lower. After finally breaking out of its long-term range last week, the block/barrel average traded within a few cents of $2.00/lb earlier this week before closing at $1.94/lb, up just a penny from last Friday. Whey prices pushed to a new all-time high of $0.77/lb and has posted just one lower weekly close out of the last 19 weeks. Class III milk is in a bit of a no-mans land after pushing above the $20.00 mark and, while producers should remain mindful of the downside potential from these levels, a move near the 2014 and 2020 highs is still possible.