Crude oil futures break out to new contract highs to start trade this week. Front-month crude oil futures traded through $85.00 barrels and established new contract highs on Tuesday’s trade as money flowed into the energy markets. Ongoing concerns about growing global demand are supporting the crude oil market. Expected global demand is forecasted to reach 3.5 million barrels/day in the first quarter of the year, outgrowing the current pace of production. With OPEC holding production limits, and U.S. shale oil idled, the market is set up for a demand-driven rally. The push-through resistance at the $76 level last week, and trade to today’s highs are likely opening the door for a possible test of the $100 barrels level. This may be a target for later in the year, but if the supply/demand picture stays consistent, this potential test looks like a possibility. 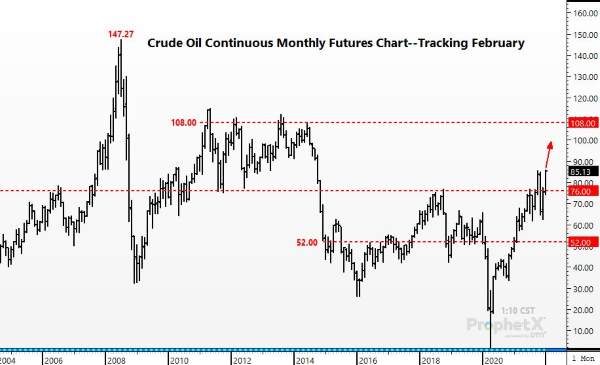 CORN HIGHLIGHTS: Corn futures ended the session mixed. Mar gained 3-1/4 cents closing at 5.99-1/2 and Dec down 0-1/2 at 5.57-3/4. Improved weather this week for dry areas of South America was viewed as negative for U.S. prices yet sharply higher wheat futures (20 to 27 cents higher) had traders on the offensive. Strong gains in wheat were supportive to corn but weaker soybeans and meal were not, however by day’s end bulls won out. Another new round of contract highs for crude oil was ethanol friendly.

Rain in Argentina and Brazil is greatly welcomed and will provide relief, especially for later planted corn. For the early planted, it is said the rain is mostly too late and damage irreversible. Export inspections at 47.4 mb were termed supportive. Year-to-date inspections are 1.5288 bb, behind 1.7498 bb for this same time last year and 63% of the USDA forecasted sales of 2.425 bb. Keep in mind the USDA lowered expected sales by 75 mb on the January WASDE report last week. 126,000 mt corn sale to unknown destinations was viewed as supportive helping prices to erase early morning losses of 5 to 6 cents. 6.00 continues to act as a magnet in the Mar contract. What is mildly perplexing is why Dec 2022 does not generate more buying interest. On the one hand, 5.50 is a good starting point for sales with the idea that if wrong, you can sell more at higher prices. On the other hand, there isn’t a lot of economic incentive with Dec corn near 5.50 and Nov soybeans near 13.00. Some acreage due to nitrogen shortages (and price) will move to soybeans. At least, that is what farmers have suggested. Yet, it does not look, based on Dec 2022 trade, that prices are poised to move higher. Dec 2022 remains rangebound, seemingly not concerned with acreage losses.

SOYBEAN HIGHLIGHTS: Soybean futures finished weaker losing 8 to 9 cents due to improved weather conditions in South America, as much needed rainfall and a cool down in temperature is at hand. Measurable rain should fall throughout parts of southern Brazil and Argentina over the next four to six days. Sharply higher wheat prices late into the session may have kept selling interest minimal. Export inspections were outstanding at 63.2 mb bringing the year-to-date total to 1.229 mb or 59.95% of the yearly expected total sales of 2.050 bb, still not at a pace that will keep bears from arguing lower exports expectations may be necessary.

We are not ready to go out on a limb and argue that weather patterns have changed from weeks of hot and dry, but it is looking likely that if the current forecast holds, a recovery for some of the bean crop is possible, both in southern Brazil and northern Argentina. Soybean meal led today’s drop with sharp losses of 13 to 14.00 anticipating improved conditions in Argentina’s crop, creating an environment where traders are less urgent to own soybean meal. Bulls will argue that in a growing demand environment, there is no room for error in this year’s crops and that what recovery there is in yield will be minimal implying a smaller South American crop. Any price pullback will be limited as end-users more aggressively cover needs. That may be the case, yet for now, we stay defensive new crop and encourage you to make sales if behind on recommendations. If demand surfaces or weather dictates, we will be quick to move out of short positions.

Talk that China is buying wheat and barley was helpful to prices today. But likely more impactful, is the news surrounding the conflict along the Russian/Ukrainian border. Though some might call it old news at this point, tensions between the two nations appear to be rising again. There are reports that Russia has started emptying its embassy in Kyiv (the capital of Ukraine). Some see this as preparation for a coming invasion, while others simply view it as a political statement. In either case, hostility between the nations is on the rise. Russia is the world’s largest wheat exporter, and Ukraine is not far behind; a conflict between them could cause prices to rise. U.S. HRW wheat is currently about 12-13 dollars cheaper per metric ton than Russian wheat, but the Russian export tax is expected to drop next week. In other news, last week Algeria bought 600,000 metric tons of milling wheat, though it will likely be sourced from the EU and Argentina. From a technical perspective, all three wheat classes are oversold, but with today’s turnaround, some indicators are signaling a buy opportunity.

The cattle market stays in consolidation trade on top of key support levels, working a narrow range. Trendline support held Apr live cattle around the $140 level, and resistance at $142 kept prices in check again this afternoon. Apr cattle have traded within this range for 9 consecutive trading sessions. Prices are looking for direction, but with the near-term trend working lower, a possible break to the downside is still a possibility. The recent spike in COVID cases has pressured the cattle market on its impacts on cattle numbers and supply chain, but the market is more optimistic that this will be a short-term issue. Estimated slaughter today may be showing some movement out of that concern. For today, 117,000 head was forecasted for kill, up 3,000 head from last week. Cash trade is typically slow to start the week, but some very light trade did occur at $137, but not enough to establish a clear trend. More trade will develop later on in the week. At midday, choice carcasses added 1.43 to 289.29 and select was 0.78 firmer to 277.83. Load count was light at 77 loads as the trend higher in retail beef continues. The weakness in live cattle, and mixed grain trade kept the feeder market pressured on the day. Jan feeders expire on January 27 and are closely tied to the cash index. The Feeder Index was 0.21 lower to 161.80. The cattle market is still trending higher overall, but near-term prices are in a consolidation pattern, looking for a reason to move either higher or lower.

LEAN HOG HIGHLIGHTS: Hog futures saw some follow-through buying strength to start the week, as slaughter numbers may be on the rebound. Feb hogs added 0.700, closing at 81.600, and Apr hogs were 0.825 higher, closing at 89.275.

Charts improved technically as prices were trading well off the lows from last week, and saw some additional follow-through support to start the week. Resistance is still over the top of the front-month contracts, as Feb looks to be targeting the $82 area, and Apr is headed towards $90. There is optimism that the COVID issues and plant speed may be a short-term effect on the slaughter pace, and estimated slaughter numbers for today may be helping signal that.  The estimated slaughter for Tuesday is 468,000 head, up 13,000 head from last week. The cash hog market values were a little less clear as midday values were “unreported due to confidentiality”. The Lean Hog Index traded higher, gaining 1.30 to 75.90, and still holding a 5.700 discount to the futures. The spread will likely limit the near-term upside in the futures market. Pork carcasses traded higher at midday, helping support the jump in futures prices. At midday today, pork carcasses were 1.79 higher to 93.73. The load count was moderate to light at 175 loads. The deferred contracts are building some recovery of recent lows as prices moved back to challenging or passing the $100.00 level. The longer-term concern of a tight hog supply picture supports the longer-term market.

DAIRY HIGHLIGHTS: Out of the 24 Class III and Class IV 2022 contracts, four were lower today with the February Class III contract dropping the hardest at 46 cents to $21.62. That contract held an 89 cent range on the day with morning gains that fizzled with the release of the spot market trade, which showed spot cheese falling 2.25 cents to start the week. Every other contract for Class III beyond February was green with Q2 leading the way with an 18 cent jump. Class IV trade was higher for the February through July contract with the second month futures closing at $23.60, just 25 cents beneath the all-time high for Class IV. Spot butter rebounded 5.50 cents today after a soft end to last week and spot powder jumped to $1.85/lb.

While next week will be busy for reports with December Milk Production and Cold Storage on Monday, this week is quieter with the exception of today’s Global Dairy Trade Auction update. The index jumped 4.60% to its highest point since 2014 thanks in large part to butter and powder strength. The U.S. spot market prices for those products are running in line with the GDT prices now, but GDT cheddar still holds a hefty premium to the U.S. block/barrel average. The milk market continues to get help from positive trends in the spot markets and fundamental reports as prices push higher as we round the halfway point of January.