Money flow has been remade up in the soybean market, and soybean oil has benefited from this strength in soybeans. The Mar soybean oil contract gained $2.12/pound on Thursday and has added $4.42 a pound on the week. More importantly, the market has broken out of the most recent downtrend and has seen aggressive buying, adding to an improved technical picture. The reasons for the strength are also fundamental. Palm oil prices have pushed to record highs, as the global edible oil markets are still in high demand. The recent surge in crude oil prices has had spillover strength into bean oil, tied to the bio-diesel prospects in soybean oil, and lastly, the market is focused on the South American weather and the continued talk of reduced yield, further tightening the potential soybean supply globally. With the price surge, Mar soybean oil looks to be testing the October highs just above the market, and possibly a further test towards the contract high at 64.68 from last summer. 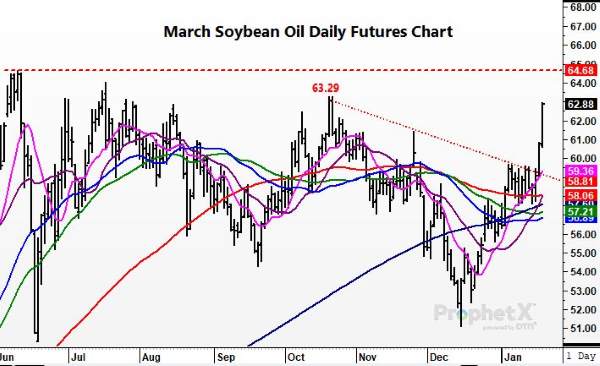 Funds may have been bought yesterday to hedge against inflation. Prices may have stalled today as we are of the opinion that farmer selling has picked up. New crop is holding but not leading a charge higher. Though new contract highs were made yesterday at 5.65-3/4, a lack of follow-through buying today is somewhat concerning. We are still biased to believe that with Nov soybeans above 13.00, farmers will lean toward planting soybeans. The ratio of Nov soybeans to Dec corn futures is near 2.35. Typically, a ratio of near 2.45 or higher brings encouraged acres to soybeans. The exception is in a price arena such as this year. The argument is, is 13.00 high enough to bring gains. Another view is to consider dollars per acre generated less cost to produce. Soybeans are attractive at current prices. With fertilizer/nitrogen unknowns, the expectation for more soybean acres makes sense. High-priced corn in China (near 11.00 equivalent to the U.S.) and growing concern that Ukraine, which reportedly has 20 mmt to ship between now and July, could experience supply movement disruptions if conflict breaks out with Russia.

SOYBEAN HIGHLIGHTS: Soybean futures exploded higher for the second day in a row gaining 15 to near 35 cents as front-month Mar led today’s gainers closing at 14.25-3/4, up 34-1/2 cents. Nov added 15-3/4 to close the session at 13.20-1/2, a new contract high close. Today’s high in Nov was 13.25, also a new contract high. Not enough recent rain and concerns about warmer and drier in southern Brazil, coupled with expectations for higher exports because China may need to come to the U.S. for inventory, prompted today’s higher markets. In addition, the USDA’s Brazil attaché lowered their estimate to 136 mmt vs the USDA’s 139 mmt.

Support also came from sharp gains in soybean oil, led by palm oil on news Indonesia wants to include more palm oil in their bio-diesel. The soybean market has had a 70 cent turnaround since bottoming on Tuesday. Sometimes when a market sells off, the traders who were sellers will place buy stops above the current market price. The idea is if, or when, prices turn around and begin to move higher, they have an order that will get triggered to exit their position. Some traders use this to enter positions. We believe short covering or the triggering of buy steps to enter a position was also a feature yesterday and again today. Rumors of China buying were also supportive but no confirmation as of this writing.

Despite the moderate losses in today’s session, wheat is still being supported by the Russia/Ukraine situation, as around 100,000 troops remain on the border. The uncertainty of what will happen has driven prices significantly higher; it is also unclear at this time just what U.S. involvement will look like. President Biden has reportedly predicted that Russia will invade, but also stated that they “will pay a heavy price” if this happens. There is not much other fresh news in the wheat market and the same headlines are becoming stagnant – HRW wheat is being threatened by drought as the U.S. southern Plains remain dry. Though it is not as critical now as if it were, say April, this still may be putting some weather premium into the marketplace. Paris milling futures were also lower today, but have not yet closed the gaps that remain on the charts. Interestingly, HRS wheat did post gains today, with Mar up 5 cents at 9.44-3/4. On the export front, Taiwan did purchase 50,000 mt of U.S. milling wheat out of the Pacific Northwest and Japan is tendering for 72,350 mt of milling wheat. From a technical perspective, stochastics still show upward momentum for all three wheat classes.

After breaking out of the most recent trading range, cattle prices consolidated near the top of yesterday’s gains. They may pause here and look towards the USDA Cattle on Feed report on Friday. Expectations for the report are total cattle on feed as of January 1 at 99.7% of last year, placement in December at 101.8% of last year, and marketings in December at 100.9% of last year. Cash trade was quiet today, signaling that the majority of trade was wrapped up for the week, with the exception of some additional clean-up trade on Friday, as $137 has caught the majority of trade this week. Beef retail values are still trending higher. At midday, choice carcasses added 1.50 to 293.10 and select was 2.40 firmer to 282.83. Load count was light at 78 loads. The overall weakness in cattle held the feeder market in check. Feeder cattle continue to consolidate, holding the narrow trading range of the past couple of weeks. Jan feeders expire on January 27 and are staying closely tied to the cash index. The Feeder Index was 0.04 lower to 161.20. The cattle market broke out higher on Wednesday but took a pause before the cattle on feed numbers on Friday. A possible test on nearby highs looks to be in order, but the market may need friendly numbers on Friday to bring the buyers out next week. Long-term contracts for the end of the year and into 2023 made the move to new highs today, and continue to show strength.

Strong buying pushed the Feb hogs through the overhead resistance levels and saw the Apr contract push through the old contract high, triggering stop orders as prices closed at the top of the days trading range. The high-range close will likely signal some additional buying support for the session on Friday. The strength was throughout the complex, as all deferred contracts starting with the Apr hogs and later all established new contract highs again on Thursday. The strong demand tone, prospects of tighter hog supplies, and the surge in feed costs are signaling producers to maintain hog production by adding premium to the market. The overall buying may be technical as the fundamentals failed to join the rally. The midday direct cash hog market traded 8.93 to yesterday at 61.14. The Lean Hog Index traded higher, gaining 0.07 to 76.85, and with the futures strength, now holding an 8.075 discount to the futures. The spread will likely limit the near-term upside in the futures market for the Feb contract with expiration less than a month away on February 14. Pork carcasses traded lower at midday, as pork carcasses were 3.04 softer to 92.43. The load count was light at 132 loads. The USDA will release weekly export sales numbers on Friday morning, and those results could help set the tone for the day. At least in the short-term, the momentum is to the upside, as money is flowing into the hogs markets, challenging historically high levels.

DAIRY HIGHLIGHTS: Class III futures took it on the chin today with strong double-digit losses, bringing the second month February contract back beneath the $21.00 mark. The overall 2022 average hit a new intraday high for the move on Tuesday at $21.535, closing at $21.30 that day and breaking since then to $20.75. Spot cheese, dropping for its fourth day in a row, fell by 4.375 cents today to $1.83125/lb, back beneath the 2021 high of $1.84/lb for the first time this calendar year. Spot whey, however, continues its climb with a 2 cent jump to a new all-time high of $0.80/lb. It is tough to know what to expect from price direction going forward. Spot cheese being unable to break $2.00/lb obviously holds a lot of weight, but the Class III milk market had gone into this week with three weeks of notable strength and was getting due for a setback. All we can do is continue to reward these prices and cut downside risk while being conscious of the fact that prices could still make a run near $24.00 or higher.

On the Class IV side of things, spot butter was able to string its third day higher in a row to break to a new high for the move, closing 1.75 cents higher at $2.90/lb. This is butter’s third-highest move in its history following a 2014 push to $3.06/lb and a 2015 rally to $3.15/lb, the only times butter has ever traded with a $3.00 handle before. As we have mentioned before, both of those rallies were essentially straight up before a downfall that was even more severe, so when this market turns over it may get ugly quickly. Class IV milk futures traded mostly lower today, although the second month February contract hung in unchanged at $23.56, just 4 cents beneath the recent high close for the move. Spot powder posted its biggest down day in 10 months with a 4 cent drop today to $1.81/lb, a little unsettling but not a huge percentage move with that market hanging at long-term highs. This market remains overdue for at least a retracement lower and as the downside risk continues to mount for spot butter, that move may be coming sooner than later.