The soybean meal market is reflecting the change in forecasts in the Argentina weather.  The fund ppositioning in soybean meal has extended its record length last week on the CFTC Commitment of Traders report, moving their long position to a net long 150,939 net contracts.  The dry weather in Argentina has hurt crop potential in soybeans for the South American country, which is the world’s largest export of the animal feed.  Recently, rainfall chances have been increasing, and the market is starting to feel that the crop in Argentina could be stabilizing.  This has triggered some profit taking in soybean meal and soybeans late last week, continuing into Monday’s session.  The March contract for soybean meal has shaved nearly 5% off its value since last Tuesday’s high.  The next couple of session could be key to see if soybean meal prices can find some support or does the selling pressure continue removing additional weather premium? 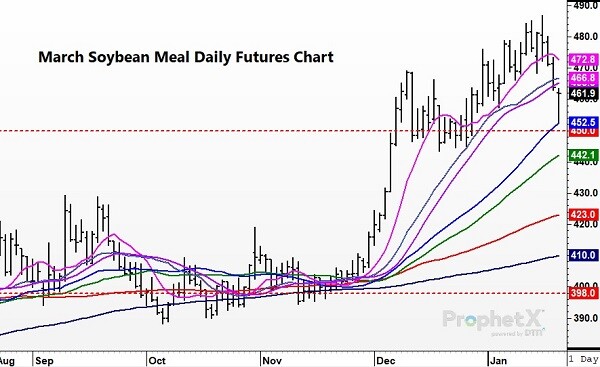 CORN HIGHLIGHTS: Corn futures, along with wheat and soybeans, had a rough session with March giving up 10 cents to close at 6.66-1/4. December lost 9-3/4 cents, closing at 5.86, its weakest close since August. Soybeans gave up 13 to 16 cents and lost over 20 cents. A lack of positive news, expectations that Brazil’s crop will help make up for losses in Argentina and a less than great inspections figure all weighed on prices today. Technical selling was noted when prices passed through the 21-day moving average.

Export sales are slow, and this has prompted the USDA to reduce forecasts from earlier in fall on previous USDA WASDE reports. Today’s inspections figure also confirms a slow export pace year-to-date, down 30% from the previous year. Many feel the export market will pick up steam in mid-winter as end users have been purchasing only as needed, but will need to buy U.S. corn. One scenario that could develop is a lack of positive news to support prices, along with expectations for Brazil to compete aggressively with the U.S. leading to a slippery slope for prices. Bullish traders will argue that it will take two large crops out of both the northern and southern hemisphere and it is likely there could be some crop concerns that will keep supplies tight. Bears will argue a waning La Nina pattern and more normal type weather could suggest growing supplies and a U.S. carryout that could be larger than a two billion bushels. Only time will tell, however, a bet against the U.S. farmer might be a poor bet. If weather is close to normal the bears will likely win the argument.

SOYBEAN HIGHLIGHTS: Soybean futures closed lower for the fourth consecutive day, after gapping down on overnight trade as Argentina continues to receive rain. Bean meal fell as well, but bean oil managed to end on a positive note pulled higher by crude oil. Mar soybeans lost 16-1/4 cents to end the session at 14.90-1/4, and Nov lost 12-1/2 cents at 13.39-1/2.

Soybeans have been struggling since Argentinian forecasts began predicting more rain last week, prompting non-commercials to liquidate some of their long positions. The Argentinian crop is only rated 5% good-to-excellent and it is a bit late for these rains to save the crop, but it will have at least some positive impact for some of their acres. Exports have held up so far with private exporters reporting sales of 7.1 mb of soybeans for delivery to unknown destinations for the 22/23 marketing year. Earlier today, the USDA said that 66.3 mb of beans were inspected for export last week, which is a good number considering Brazil will soon take over a large portion of the export business. Soybean inspections for 22/23 are only down 3% from a year ago to date. Chinese markets are closed this week to celebrate the Lunar New Year, which may also be affecting price movement. Bean meal fell only slightly today, while bean oil closed higher, tightening up crush margins that had previously slipped 50 cents last week. Non-commercials were net buyers last week and added 36,594 contracts to their net long position increasing it to 168,298 contracts. Soybean meal could be under some pressure as the CFTC reported 166,350 net longs last week, which is the largest position in four years. Despite the selloff, March soybeans have not yet broken out of their upward channel and remain in an uptrend, but support isn’t far at the 50-day moving average of 14.76.

Rain in Argentina was the big news over the weekend. About 65% of the country received precipitation, with some areas receiving as much as two inches. While the overall pattern may not have changed, there is chance for another rain event there next week as well. This seemed to be the catalyst to the selloff in grains even though wheat was the downside leader. Along with that precipitation, Paris milling futures lost over five Euros per mt as they continue their downward slide. This was unsupportive to US futures. As far as US weather, the southwestern HRW areas are still mostly dry (but there has been some moisture in northern and eastern areas). The southern Plains may show some improvement over the next couple of weeks, however, with extreme cold not expected. Also weighing on wheat are the poor US exports, as both Russia and Ukraine continue to offer wheat to the world at significantly cheaper prices. Today’s export inspections did not indicate any deviation from this pattern. Wheat inspections were pegged at 12.3 mb, brining total 22/23 inspections to 469 mb. Ultimately, outside markets may have a larger impact on the market down the road; what the Fed does with interest rates will affect the dollar and the grain markets.

The Cattle on Feed report on Friday didn’t bring many surprises and was relatively neutral towards expectations. Going into the numbers, the cattle market was under selling pressure as cash was weaker and the market seemed to lose its upward momentum.  The Cattle on Feed report still confirmed a tighter cattle supply and that was enough to trigger some short covering to start the week.  In terms of reports, the USDA will release cattle inventory numbers at the end of the month, and expectations are for that report to continue to show a tightening cattle herd in the U.S. For fundamentals, the cattle market will be watching cash trade develop this week, which disappointed the market last week with a lower tone.  Cash trade was undeveloped on Monday, as both asking prices and bids were idle.  In retail trade, last week saw choice carcasses trade 5.98 lower and select slip 1.32 as production was increased in the face of a slower demand tone.  To start the week, choice carcasses slipped .61 to 271.11 and select was .57 lower to 255.86.  The load count was light at 60 midday loads.  An improved demand tone would be key to help push cash prices back higher over last week.  Feeder cattle saw a strong buying tone with the selling pressure in the grain market.  In addition, placement numbers remain very light on the Cattle on Feed report and that triggered some short covering.  Jan feeders expire this week and are tied to the index, which traded up .70 at 177.73.  Today’s trade has added premium back to the futures over the index, which could be a limiting factor.  The cattle market saw some recover of last week’s lows fueled by the Cattle on Feed report and some short covering in the face of weak grains.  Cash trade may still be the key in the short term as the upward momentum has slipped in the cattle markets.  Prices could be moving into a sideways trading range with last week’s lows and the support.  Time will tell, but follow buying support over the next couple days will be key.

LEAN HOG HIGHLIGHTS: Lean hog futures are still trying to find some buying support as prices consolidated off Friday’s trade. Feb hogs were .250 lower to 77.575, and April slipped .275 to 85.450.

April hogs trade on an inside day within Friday’s trading range, which was disappointing for a market looking to possibly bottom.  The lack of upward momentum after Friday’s strength will likely keep the market on the defensive as prices failed to hold early session gains.  Fund positioning has been on the defensive in the hog market as the long liquidation has dropped the fund position to a mere 10,000+ long contract on last week’s Commitment of Trader’s report. At this time, there is still little fundamental reason for the funds to step in and buy the market and cash and retail values continue to struggle. On Monday, the Cash Index slipped .63 to 72.65.  The February contract is still at a 4.925 premium over the index, which is a limiting factor. Direct cash trade at midday was softer, dropping .13 to 70.27. Retail values trended firmer last week and gained value at midday today.  Midday trade saw pork carcasses gaining 3.49 to 83.49. The load count was light at 170 midday loads.  The hog market may be at a crossroads at these levels.  The hog market is very oversold and due for some correction, but the price action om Monday was disappointing.  Last week may have put a bottom in, but that cannot be confirmed at this time.

DAIRY HIGHLIGHTS: After dropping 14.6250 cents last week, the block/barrel average rebounded in a big way to start the new week with 12.25 cents of gains to close at $1.83/lb. Front month milk futures reacted with double digit gains as the complex tries to put together some recovery action after succumbing to pressure in recent weeks. While Class IV futures were mostly higher today, the underlying spot trade saw losses continue for both butter and powder. Wednesday will provide a fundamental update for cheese and butter with December Cold Storage, but it seems the driving force for dairy products as of late has been lower GDT prices. On Wednesday, the final 2022 Milk Production report will take place as the USDA provides December numbers.