The July Chicago wheat futures traded at its lowest level in a year yesterday. A downtrend is intact since May of 2022. Is the market probing for a bottom? The bullish argument is prices are trading at their lowest level since before the war and with a poor start to the U.S. winter wheat crop, prices are undervalued.  There is little reason to expect a big crop from Ukraine in 2023 and realistically Russia is not likely to repeat last year’s bumper crop. Dry weather has plagued the Argentine crop. Excluding China supplies, exporting countries have the lowest inventory in 15 years. Managed money is net short wheat and may be trying to push it lower, yet fundamentals are friendly, so if they fail it would be no surprise to see funds cover short positions. While it is hard to predict when and where a low in a market is, July Chicago is probably pretty close if not there already. 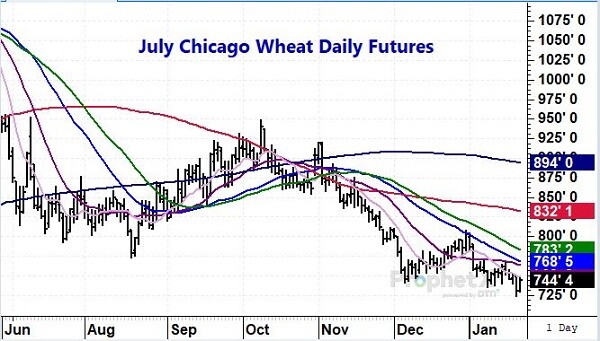 CORN HIGHLIGHTS: Corn futures had an impressive day finishing with double digit gains in the old crop contracts. March gained 10-3/4 to end the session at 6.77 and December added 5-1/4 to end the day at 5.91-1/4. Support came from an announced export sale of 130,000 metric tons to unknown destinations. Bulls can’t help, but wonder if this is China stepping into the marketplace, and if so, could be the start of additional buying. Spillover support from higher wheat prices was also a factor today.

Today’s trade basically takes back yesterday’s losses, yet there is likely more optimism with talk of exports starting to show signs of life. Yet, we don’t really see much of anything else to suggest much higher. Overall, Brazil harvest of beans is a little heavier each day suggesting the second crop of corn planting is underway. Without consistently strong new export sales, it is becoming more challenging each day to argue for higher prices, at least much higher. Recent rains in Argentina are helpful for their crop. Is it enough? Probably not, therefore, expect the market to buy dips. Yet, at current prices (high historically) if may be difficult to find new buyers after prices rally. So, unless weather grips the Brazil corn production in a negative way, anticipate more sideways trade.

SOYBEAN HIGHLIGHTS: Soybean futures closed lower yet again after posting a small rally earlier in the day. Bean meal traded slightly higher, while bean oil fell along with a drop in crude oil of nearly 1.50 per barrel. Mar soybeans lost 1-3/4 cents to end the session at 14.88-1/2, and Nov lost 1-1/2 cents at 13.38.

Soybeans began the day higher and were up around 12 cents at one point before falling back to a slight loss on the day after yesterday’s sharp selloff. Much of this selling comes from fund liquidation due to southern Brazil and Argentina’s recent rains, but the question remains, how much will the moisture help this crop that is rated 3% good to excellent and 60% poor to very poor? Argentina’s production estimates from the USDA showed only a 4 mmt decline, but other sources are estimating a 34 mmt crop, which is 11.5 mmt below the USDA’s guess. Southern Brazil has received some rain, but is relatively dry, which may impact yields, but in Mato Grosso, early yields are showing 60 bpa compared to early estimates of 53 bpa. Mato Grosso is the biggest soybean producing area in Brazil and a jump that significant in yields is important to watch. Mato Grosso is now 6% harvested while Brazil as a whole is at 2%, and it is expected that when China is done with their holiday week they will ramp up Brazilian soybean purchases. Nearby bean meal closed lower while deferred months closed higher, and bean oil moved lower along with lower crude which ended 1.48 a barrel lower to 80.14. Despite the selloff, March soybeans have not yet broken out of their upward channel and remain in an uptrend.

After a rough start to the week yesterday, wheat attempted a recovery today. It couldn’t totally erase the previous session’s losses, but it was encouraging to see the rally anyway. Paris milling wheat was helpful, as it was also in the green today. In general, poor US exports and cheap wheat out of the Black Sea have been pressuring the US futures market. There was not a lot of fresh news to drive today’s rally, which raises concern that it may just be a dead-cat bounce. However, it is being said that India’s internal wheat prices have risen to a record high. Around the equivalent of $361 per mt, the drought they faced last year seems to be having an impact. In the US southern Plains, drought also remains a concern as the southwestern HRW areas are still mostly dry with any precipitation hitting northeastern areas. Perhaps also of help to wheat today was the US Dollar Index, which remains near eight month lows.

CATTLE HIGHLIGHTS:  Live cattle ended the day higher, while feeders apart from the March contract moved lower thanks to higher corn prices. Boxed beef moved lower, but better cash this week may end up being supportive. Feb cattle were 0.375 higher to 157.850, and Apr cattle added 0.750 to 161.300. March feeders were 0.325 higher to 183.600.

Live cattle got a boost from higher corn today, but the sluggish trend in boxed beef has kept futures from moving significantly higher. Today’s afternoon report saw choice cuts fall another 1.80 to 269.64, while select lost 2.10 to 252.39. Cash was 1 to 3 dollars lower last week but packers did not get many cattle bought ahead for this week which may cause them to get more aggressive this week and bid up, so steady to higher cash is expected. Feeder cattle were under pressure from the move higher in corn, but did not do terribly and even saw a higher close in the March contract. March feeders appear to have put a bottom in last week at the end of last week with a buy signal crossover on the stochastics. For live cattle, asking cash prices in the South are starting at 157 and not established in the North, but significant cash business will likely be delayed until Thursday or Friday. Monday’s slaughter is estimated at 124,000 head, 1,000 head less than a week ago and 6,000 less than a year ago. Cattle supplies remain tight around the country and live cattle prices are expected to remain higher.

LEAN HOG HIGHLIGHTS: Lean hog futures closed neutral to lower, though managed to hold support. Without much bullish news or fundamentals, there are simply more sellers than buyers right now. Feb hogs were 0.475 lower at 77.100, and April lost 0.075 to 85.375. The May contract managed an unchanged close at 93.400.

The overall lower close in hogs was a disappointment, but the February contract did hold support, with a daily low of 76.425. The October 4 low of 76.400 was seen again last week on January 9, but remains intact at the close today. Hog futures are well oversold and may be due for a bounce, but lower cash trade may be preventing that rally. The National Direct Afternoon report yesterday declined 0.28. With the Hog Index at 72.65, Feb remains at a significant premium. Cutouts did gain almost a dollar yesterday. However, the cutouts have also been under pressure recently as pork is available to the market; slaughter pace is strong, exceeding both last week’s pace and that of a year ago. It remains to be seen if the decent rally in corn today is just a bounce, but nevertheless, the higher prices may have turned traders to the bearish side for both feeder cattle and hogs. There is also concern about Chinese demand, with it being reported that their pork production increased 15.8% last year which may limit their import demand.

DAIRY HIGHLIGHTS: After yesterday’s strong reversal in the dairy trade that saw contracts up as many as 43c, there was little follow-through on Tuesday. The spot trade on Tuesday was soft across the board with each product lower. Powder fell another 0.50c to its lowest price since March 2021, and butter made a new low of year as well – falling to $2.2675/lb. Rounding out the trade was cheese, down 0.375c to $1.82625/lb and powder down 0.25c to $0.3250/lb. Each spot product holds in a downtrend and there doesn’t seem to be much demand at this time, despite the lower prices. The US market look to be following the global markets to the downside. Tomorrow will provide some clarity to the trade with the release of a milk production report and a cold storage report.