The USDA release the Cattle Inventory report on Monday afternoon, and the picture of a tighter cattle supply got confirmation.  The 2021 calf crop in the United States was estimated at 35.1 million head, down 1 percent from the previous year’s calf crop.  This was slightly smaller than expected, but well within analyst projections.  This puts the calf crop at the lowest levels since 2015 and will likely keep the trend of lower cattle numbers holding into the next couple of years.  Strong cow slaughter has weighed on cattle numbers, as total beef cows were down 2% from last year at 30.1 million head.  The impact of higher grain prices, tight profit margins, and adverse weather in portion of cattle country have helped limit the beef cows available.  The trends in the cattle market stay the same, as a tighter supply picture stay on the horizon now and going forward. 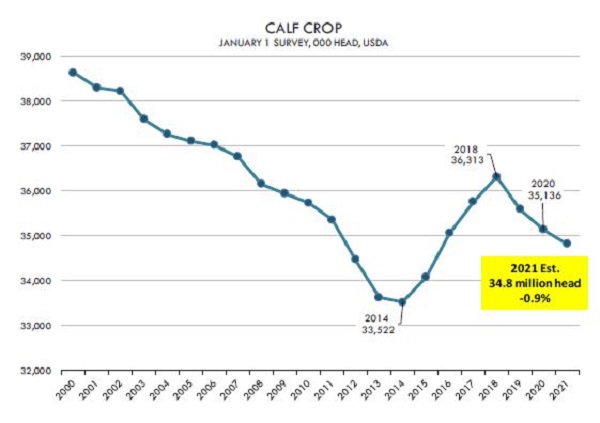 CORN HIGHLIGHTS: Corn futures saw a wave of spread unwinding pressure to the front-end of the corn market, as old crop bushels pushed lower, but deferred contracts held gains in bear spread market to start the week.  Strong selling in the wheat market also pressured corn futures, as wheat lost double digits.  March corn lost 10 cents to 6.26, while the May futures dropped 8-3/4 cents to 6.24-1/2.  On the flip side, December corn gained 4 cents to 5.73 on Monday.

The majority of price action may have been fueled by technical trade on Monday, as March corn broke out to new contract highs on the overnight trade.  March corn pushed to a new contract high of 6.42-1/2 before reversing over to finish lower on the session.  This established a bearish reversal on the charts technically, and could signal some additional downside pressure in the near-term.  This also triggered some movement in the old crop/new crop spread, as the March-December 2022 spread dropped 16 cents today.  The weakness in the spread and the price action may be signaling a near-term top, but follow through trade will be the key.  Weekly export inspection were 40.8 mb for last week, within expectations.  Total inspections are now totaling 788 mb, down 12% from last year.  Corn inspection are running fairly even with USDA estimates.  Deferred contracts will still see support from the strong soybean market, as the acre battle for this spring is still on the horizon.

SOYBEAN HIGHLIGHTS: Soybean futures rallied sharply again today. Higher crude and other veg oils lent support to the bean market. March gained 20-1/2 cents, closing at 14.90-1/2 and November was up 15-1/2 at 13.67.

Soybean export inspections were pegged at 51.9 mb, with total inspections now at 1.333 bb. A new sale was also announced to China for 129,000 mt. Of that total 66,000 mt is for delivery during the 21/22 marketing year, with the remaining 63,000 mt for delivery during the 22/23 marketing year. Part of what is causing the rally in soybeans are the world veg oil markets; Malaysian palm oil continues to make new highs and Indonesia may limit palm oil exports. Additionally, Ukraine is the world’s largest exporter of sunflower seed oil and the conflict on their border with Russia is causing concerns regarding supply, logistics, sanctions, etc. South American weather is also a factor in the recent rally. Private group AgRural decreased their Brazilian soybean crop estimate to 128.5 mmt from 133.4 mmt. In northern Brazil, there are still harvest challenges due to weather that has been perhaps too wet. The Buenos Aires Grain Exchange also recently rated only 38% of Argentina’s soybean crop good to excellent.

Though firmer overnight, wheat futures could not hold onto their gains throughout the day. The US markets were not the only ones under pressure, with Paris milling wheat futures also closing sharply lower. The March contract lost 12.75 Euros per metric ton; with a close at 266 Euros per mt, that represents a decline of almost 5%. The volatility in wheat is high right now and will likely remain that way for some time if the conflict in the Black Sea region continues. The UN did meet to discuss the Russian threat – Russia continues to contend that it has no plan to invade – this may have put some pressure on wheat today. With that said, their troops remain on the border and this is making people nervous. In other news, wheat export inspections were pegged at 13.3 mb, with total inspections now at 499 mb. Additionally, Egypt last week purchased 420,000 mt of wheat from Ukraine, Russia, and Romania. Looking at US weather, storms this week could bring snow and ice to a wide area. It looks like the majority of that moisture will miss the HRW wheat crop though and drought remains a legitimate concern.

CATTLE HIGHLIGHTS: Cattle futures saw aggressive buying strength to start the week, as optimism was in front of the market before the USDA Cattle Inventory report and support spilled over from selling pressure in wheat and corn markets.   Feb cattle gained .875 to 139.575, and April Cattle gained 1.325 to 144.525.  Feeders saw strong triple digit gains with March adding 3.400 to 163.025.

The  buying strength tart right on the open as April cattle posted a small gap higher  on the session.  Price now look poised to challenge the recent contract highs. October and later contract made that break, and closed at new contract highs on Monday.  The Cattle inventory report confirms the market expectation of a tighter cattle supply.  Total Cattle and Calves were down 2% from last year at 91.9 million head.  Total Beef cows were also down 2% at 30.1 million head, and the 2021 calf crop was down 1% from last year and the lowest calf crop total since 2015.  In daily fundamentals, Retail values stay very supportive, along with good overall demand. Boxed beef values were mixed at midday (Choice: -.04, and Select: +1.80, reflecting the good demand tone. Retail prices are still historically high, which should help provide some leverage in the cash market next week. Weekly cash trade was quiet today as the market was undeveloped, as bids and asks were undefined and the majority of trade to be done later in the week The feeder market strong higher fueled by buying strength in the cattle markets. Weakness in grain aided in the buying support, but the market is focusing on the tighter calf crop helping to boost competition for cattle. The cattle market overall looks friendly and is still trading in an up-trend. We like the near-term view of the market, as prices may be starting to target a winter/early spring high.

April futures ended the day in consolidation trade holding within Friday’s trading range, as prices look for direction.  A friendly demand tone stays supportive, but the premium of the futures market to the cash market limit near-term rallies. Fundamentally, The direct cash market was supportive today, adding 2.17 to 66.69 for the weight average price. The lean hog index had good strength, reflecting a more active cash market. On Monday the index gained 0.8 to 80.61. Pork retail values were stronger at midday on Monday, gaining 3.27 to 99.66,  with a load count of 194 midday loads. Deferred contracts have shown strength this week recently on optimism in the potential tighter supplies of available hogs, but prices are looking tired in the near-term. Summer contracts posted a reversal last week on Thursday, and are holding in place in the market. Hog futures look to be taking a pause, but prices rejected the lows for last week relatively quickly, but struggling with resistance over top.  Hog futures will be watching the fundamentals for a clue about possible direction.

DAIRY HIGHLIGHTS: Class III futures started the week with decent gains, capping off a crazy month for price action. The second month February contract is finishing January down 37 cents within a whopping $3.45 range. Spot cheese closed at $1.8050/lb today, up 3.8750 cents from Friday’s close while whey added another penny to its rally with a close at $0.85/lb. The roll this week will get the second month chart back over $21.00 but it may take a continued mover higher in cheese to sustain those levels. This week is mostly quiet for reports but tomorrow’s Global Dairy Trade Auction should be interesting with the recent US spot market instability.

The Class IV milk market was higher today as well with the soon-to-be second month March contract leading the way with a push back over $24.00. Spot butter was unchanged at $2.54/lb, taking a breather after its recent sell-off which could be construed as a positive development. Two weeks ago, spot powder traded to its highest point since June of 2014 with a run up to $1.85/lb before settling back a bit. That market was 2.50 cents higher today to push up to $1.83/lb and right near the 2011 high. After a minor setback, Class IV milk seems to keep wanting to move higher.