Corn futures saw selling pressure after the weekly ethanol report showed some negative trends.  U.S. ethanol stocks surged a staggering 25% over the past handful of weeks, as weekly production has remained strong, but usage has tumbled.  Total stocks were 25.854 million barrels, up 5.63% from last week.  Total production for last week averaged 1.041 million barrels/day, only up slightly with last week.  The large stock piles, plus tightening margins, made the corn market nervous that the strong ethanol demand may start to slow.  Current pace on corn usage is still strong and trending above USDA projections, but with the higher price of corn, this pace may be slowing.  The trends in the ethanol industry will be key into the spring, as forecast for corn consumption for ethanol production is expected to reach multi-year highs. 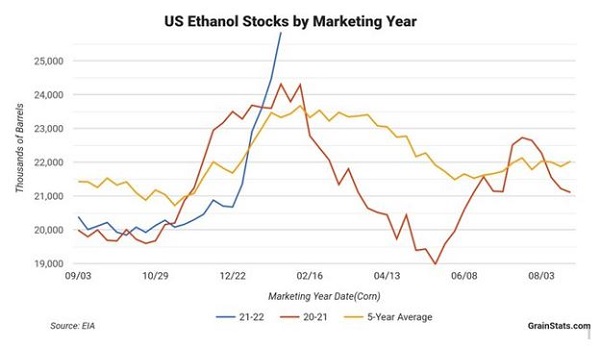 USDA release weekly ethanol report on Wednesday, and the ethanol market saw a build up of stockpiles.  Ethanol stocks jumped to 25.854 million barrels, as producers keep pushing forward with production, while overall usage has slowed.  The ethanol industry may be gearing up for a round of ethanol export shipments, as producers are looking for places to store the product.  Weekly production was strong, down only slightly from last week, and corn demand for ethanol remains supportive. Additional selling pressure came from the wheat market. Forecasts for moisture from this week’s winter storm should provide needed precipitation across winter wheat country.  Technically, corn future are under the pressure of the reversal from Monday, and as prices failed to push through that high during the session today, opened the door for selling pressure.  Prices did fall back to test  the 10-day and 20-day moving averages, before finding some footing.  Charts have turned more negative, but prices did find some support during the session. December corn is showing more strength, as the strong soybean market is trying to pull acres from corn.  With the current corn/soybean ratio at 2.4:1, the market is leaning towards wanting more soybeans.

SOYBEAN HIGHLIGHTS: Soybean futures, though closing higher, settled significantly off of the highs established this morning. Profit orders being triggered likely prevented the market from rallying further. March gained 16-3/4 cents, closing at 15.45-1/4 and November was up 7-3/4 cents at 13.89-3/4.

Early this morning, buying interest surged in soybeans and new contract highs were made. As the day wore on however, some of that momentum seemed to be lost. The March contract had a daily trading range of 38 cents, and ended up closing almost 19 cents off the newly established high of 15.64. Weakness was also observed in corn and wheat which both posted double digit losses at the close. A sale of 380,000 mt (about 14 mb) of US soybeans was announced today for delivery to unknown destinations during the 21/22 marketing year. This, along with two recent confirmed sales to China is supportive to the market. What may have been observed today is profit taking after such a strong move upwards. On the weather front, La Nina is likely to provide drier than normal condition for the month of February in parts of Paraguay, Argentina, and southern Brazil. Central and northern Brazil have the opposite problem, with rains slowing down harvest. It is noted that farmers in the southern hemisphere have reduced selling, in part because of the higher Brazilian Real.

The Russia and Ukraine tensions have eased for now but troops remain on the border. In fact some reports indicate that the number of troops there is increasing, but the market did not seem to take this into account today. In general, traders seem less concerned about this conflict in the Black Sea region and that is weighing on the market. Paris milling wheat futures also closed lower today by roughly 4-5 Euros per metric ton. In terms of weather, the storm moving across the US is offering plenty of moisture east of the Mississippi in SRW wheat areas. But in the drought-stricken HRW wheat areas not much moisture is expected. Longer term, the La Nina pattern may continue into the US summer, and may add to dry conditions in the southern plains. Next week, on February 9, the USDA will release the monthly supply and demand report. Due to slow export pace, on that report they may lower US exports and raise the carryout.

Money flow stayed moving into the cattle markets, as the majority of contracts broke out to new contract highs on Wednesday’s trade.  April cattle have moved up and past the $145 price level and may be looking to target $150.  With strong packer margins, weekly cash trade is starting to build stronger than last week.  Northern trade at $140 live bids and $222 for dressed beef is trending $3-4 above last week.  Southern trade is slower to develop as producers are looking for stronger bids.  Trade was still light, as more trade will come together later in the week.  Boxed beef values were lower at midday (Choice: -1.68, and Select: -0.16).  Load count was light at 72 loads.  At $283 for Choice carcasses, retail values are still trending well above historical averages, reflecting the good demand tone.  The feeder market was sharply higher fueled by buying strength in the cattle markets and a sharp pullback in wheat and corn markets. With new contract highs and the perspective that cattle numbers are tight, the competition for feeders is helping push prices higher.  The cattle market overall looks friendly and is still trading in a strong up-trend. We like the near-term view of the market, as prices may be starting to target a winter/early spring highs, but cattle futures are moving into over-bought territory as the market searches for a near-term top.

With the exception of the front month futures, hog futures pushed to new contract highs again on Wednesday, as technical buying and money flow are driving the market.  April hogs did touch the $100.00 barrier on Wednesday, and could provide some psychological resistance over the market.  Summer hogs remain strong and are looking to test even higher levels.  The cash market has a more friendly tone.  The Cash Hog Index is trending higher, gaining .99 to 83.14.  The index is still trading at a 4.210 discount to the Feb futures, and with expiration just around the corner, keeps the rally limited.  Direct morning cash hogs surged higher adding 19.35 to an average of 86.35, helping support the deferred hog futures.  Retail values were firmer supported by good demand.  At midday, pork retail values were 3.70 higher to 96.67 on a load count of 116 loads.  USDA will release weekly export sales on Thursday, and that could provide good price direction for the rest of the week.  The hog market has been moving aggressively higher, and are moving into over-bought territory, but still looking for a sign of a top.

DAIRY HIGHLIGHTS: The spot butter market has only posted one up session over the past eight days as a steady round of selling pressure continues to hit the market. Wednesday’s spot trade saw the US butter price fall another 3c to $2.4525/lb on 3 loads traded. This is the lowest price for spot butter since 12/31/21 and puts the market below the January low. In the Global Dairy Trade Auction yesterday, GDT butter jumped 3.30% and closed up into a new 5-year high, but at least for now this didn’t support the US market. Sellers appear to have inventory to move on the market after prices had recently hit multi-year highs. A slowdown in butter demand along with spot powder working lower two days in a row is pushing the class IV trade a bit lower. On Wednesday, second month class IV fell 39c and closed at $23.74 per cwt. The March contract fell 34c to $23.15.

Over in the class III trade, buyers kept support beneath the market as contracts work to gain back what was lost in the recent correction. We still haven’t seen any contracts hit new highs, but the steady bidding is encouraging. After falling lower for nine days in a row, the spot cheese trade has reversed and worked higher for five days in a row. Blocks settled up 2.25c to $1.88/lb on Wednesday while barrels added 4.50c to $1.84/lb. The spread between blocks and barrels is a healthy 4c. Nearby class III milk futures were up double digits. The January 2022 contract is now settled and off the board for milk and February is the new front month contract.