For the first time since 2014, crude oil prices have crossed over $90.00 a barrel.  The crude oil market remains strong as prices pushed to new near-term highs on Wednesday, after touching over $90.00 a barrel.  The strength behind the crude oil market is truly a supply and demand story.  With demand remaining strong, the market remains lifted by a tight supply picture.  Today, OPEC+ nations remained firm on their planned moderate output increases, which should keep the supply side of the market still a limiting factor.  As prices breach the 90.00 barrier, the next target is a push to the $100.00, or higher as some industry analysts are predicting. 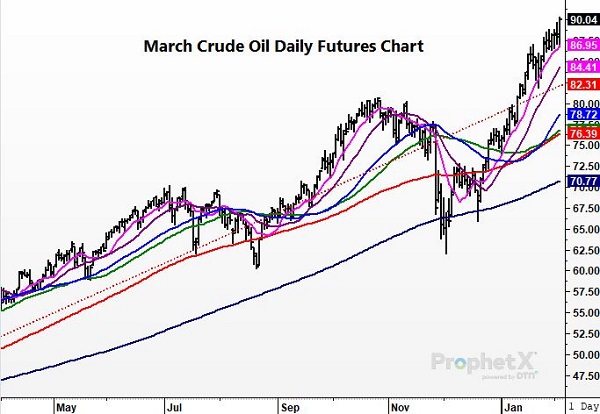 Weekly export sales for corn were within expectation, but not overwhelming with new net sales of 1,175,200 MT for 2021/2022 were down 16% from the previous week, but up 47% from the prior 4-week average. Japan and Mexico were the top buyers of U.S. corn. The negative news came from an announced cancellation of 380,000 mt, or 15 mb bushels by China of old crop corn. This was likely part of the strong selling pressure yesterday, as the news was relatively absorbed today. Technically, the corn market has seen topping actions over the past handful of days, showing the signs of a tired market, failing at the 6.40 level. Prices seemed to hold 6.10 on March and May today., but the trade on Friday may be key. In outside markets, the push of crude oil into the $90 window today is supportive with strength across the energy complex. Yesterday’s ethanol stock report showing a quick build up is concerning, but this may be a short-term problem with spring driving season around the corner.

SUMMARY: From a technical view, corn is overbought and may be beginning to see some correction. Over the next few sessions, market will be watching demand news, influence of outside markets, and South American weather as we get close to the USDA report on Feb 9.  Expect volatility to continue and be current with recommendations.

SOYBEAN HIGHLIGHTS: Soybean futures took a breather today. After trading both sides of neutral throughout the day, the close was mixed. Profit taking, and lower soy oil were balanced out by downgrades in South America. March lost 1 cent, closing at 15.44-1/4 and November was up 3 cents at 13.92-3/4.

Compared to recent sessions, it was a relatively quiet day for soybeans. There was talk that China purchased six cargoes of US beans yesterday from the Gulf, but this was not enough to rally the market. Additionally it is noted that the price of US PNW soybeans is now cheaper than Brazil. On today’s export sales report, the USDA said there was an increase of 40.3 mb of soybean export sales for 21/22 and an increase of 32.4 for 22/23. South American crops continue to be reduced in terms of both quality and quantity. The Buenos Aires Gran Exchange reported 37% of Argentina’s soybean crop was good to excellent (vs 38% last week). They are also estimating their soybean crop at 42.0 mmt (vs the USDA’s 46.5 mmt estimate). In Paraguay estimates for the soybean crop are as low as 4 mmt, compared to a normal crop of 10 mmt. There a couple items weighing on the market. Profit taking and liquidation ahead of next week’s USDA report may have pressured the market today. Soybean oil was also lower, as it followed palm oil. The WASDE report next week will provide direction but general expectations are for lower South American crops.

Despite closing in the red, it is actually somewhat encouraging that wheat closed as high as it did. March Chi gained back 11-3/4 cents from its daily low of 7.40. Given what the market has seen lately (in terms of the downtrend) being able to recover from those lows is impressive. This also comes in the face of a dismal increase of 2.1 mb of wheat export sales reported today by the USDA. The US is not seeing a lot of wheat export business as our prices are higher than Europe or the Black Sea. It is likely that on February 9, the USDA will lower wheat exports and raise the carryout. In terms of weather, the storm moving across the US has dumped plenty of snow in some places, but HRW areas are still lacking. The snow that the southern Plains did receive amounts to an actual moisture level of only about 1/2 inch – not enough to reverse the drought conditions. Looking over to the Russia / Ukraine situation there is a lack of fresh news.

CATTLE HIGHLIGHTS: Cattle futures finished mixed on the session Thursday, as prices consolidated near the top of the trading range.  Cash market stayed supportive, but recent softening in retail values may be enough to slow the upward momentum.   Feb cattle gained .475 to 141.600, and April cattle slipped .150 to 146.750.  Feeders saw slightly lower trade with March slipping .150 to 166.725.

Most live cattle futures pushed to new contract highs again on Thursday, but slide off those levels.  Regardless, closing prices stayed in the top of the trading range, but momentum may be slowing.    Cash trade for the week is trending $3-4 higher, as $140 seems to be the bid.  This is keeping the support in the front end of the live cattle market.  Boxed beef values were lower at midday (Choice: -1.09 and Select: -2.43).  Load count was light at 76 loads.  Carcasses have been trending lower on the week, which is weighing on the deferred contracts, possibly limiting gains.  Weekly export sales saw new sales of 20,100 MT, with Japan, South Korea, and Taiwan as the top buyers of U.S. beef last week.  Despite weakness in grain markets, the slowing of momentum in the live cattle market weighed on feeder, finishing with slight losses.  The cash feeder index was slightly higher, gaining .16 to 158.93, which could limit the front-end March contract.    The cattle market overall looks friendly and is still trading in a strong up-trend, but cattle futures are moving into over-bought territory as the market searches for a near-term top.

For the second straight day, April hogs tried to push through the $100.00 barrier, only to drop off that high.  The weak price action posted a technical hook reversal lower, showing the loss of upward momentum.  This maybe due to profit taking after a strong week.  Follow through going into the end on the week may be key to determine direction.  The cash market has a more friendly tone.  The Cash Hog Index is trending higher, gaining .15 to 83.29.  The index is still trading at a 3.160 discount to the Feb futures, and with expiration just around the corner, keeps the rally potential limited.  Direct morning cash hogs was slightly higher adding .81 to an average of 87.16.  Retail values were softer, which weighed on prices.  At midday, pork retail values were 1.04 lower to 95.40 on a load count of 146 loads.  Weekly export sales were 30,400 MT of new sales with Mexico, Japan, and Canada as the top buyers of U.S. pork.  The hog market has been moving aggressively higher, and are moving into over-bought territory. Today’s price action was disappointing, and may be signaling a near-term top.

DAIRY HIGHLIGHTS: The block/barrel average was up 0.625 cents today, closing higher for its sixth straight trading day at $1.86625/lb. The move over the last two days has gotten the average back over the 2021 high of $1.84/lb which opens the market up got another retest of the $2.00 mark. Class III futures, however, were lower today with the exception of the front month as the 2022 average closed at $20.86. Tomorrow afternoon, the USDA will release its December numbers for Dairy Products Production, a report which has shown strong cheese production through all of 2021 so far and has helped keep a damper on cheese prices.