Dec corn futures pushed into new contract highs, battling Nov soybean futures for acres. Though soybean inputs are cheaper, it is likely farmers, if they can achieve 6.00 or higher for corn, will not readily switch to soybean acres. As it stands, it is believed up to 3 million acres could go from corn to soybeans. Yet, the final story is not told. If corn futures accelerate higher in the weeks ahead like soybean prices have over the last several weeks, corn acres may see little or no change. 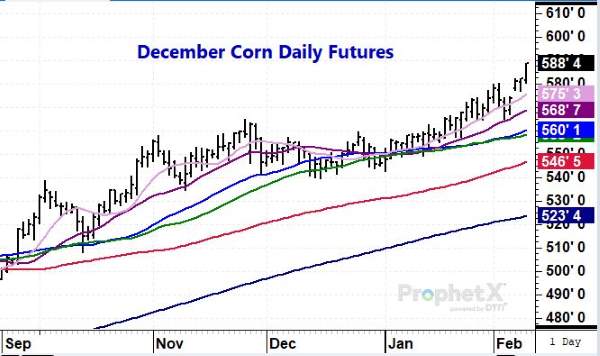 CORN HIGHLIGHTS: Corn futures continued their surge higher, closing with strong gains of 5-3/4 to 14-1/2 cents as weather concerns and fund buying continue to move corn and other commodities higher. New contract highs were scored for both old and new crop contracts after the release of the USDA report. The report was neutral by all accounts. It appeared traders were satisfied the report was not negative and that was enough to encourage buying. Mar corn closed at 6.46-3/4, up 14-1/2 cents leading today’s gainers. New crop Dec added 6-1/2 to close at 5.88-1/2, a new contract high close.

Unlike the soybean market, corn futures have had a steady uptrend since finding a low in Sep. Soybean prices have accelerated over the last month. Is it corn’s turn to accelerate? It appeared so today. Continuing concerns with southern Brazil’s dry weather, as well as too wet in the northern and eastern regions hampering soybean harvest, is keeping the trade on the offensive. World projected carryout was just under one million metric tonnes lower than last month (neutral), yet after the report, prices steadily climbed into the close. Argentine corn production was left unchanged at 54 mmt and Brazil only dropped 1 mmt when the trade was looking for a decline of 2 mmt.

Argentina’s production is now forecasted at 45 mmt, down 1.5 from January, but slightly higher than the forecasted expectation of 44.2 mt. Brazil is now expected to produce 134 mmt, down from last month’s 139 but higher than the pre-report average estimate of 133 mt. World carryout was slightly higher than the forecasted 91.3 mmt with today’s figure at 92.8. Yet, despite slightly negative reports from expectations, futures rallied anticipating the current weather outlook to remain mostly less than ideal for major producing regions in Brazil. Further reductions are likely. The pragmatic approach that the USDA tends to incorporate when adding or decreasing supply appears in full effect. Most private estimates are well beneath the current USDA estimate. Nonetheless, today’s decline of five million metric tons in Brazil production does signal a definite weather problem. Expect to hear more announced USDA sales as the world scrambles to secure inventory.

All eyes were on today’s WASDE report, which turned out to be rather neutral for the grains. Wheat was a little more bearish; expectations for U.S. wheat ending stocks were at 630 mb but they came in today at 648 mb, near the higher end of pre-report guesses. This is up from the January estimate of 628 mb. U.S. exports were also lowered to 810 mb vs last month’s 825 mb. World numbers tell a slightly different story, with today’s ending stocks number pegged at 278.2 mmt, down from 280.0 mmt in January. The USDA also reduced their Canadian wheat carryout estimate from 5.14 mmt to 3.14 mmt (Stats Canada recently reduced their wheat stocks number more than expected as well). On the news front, not much has changed. Diplomatic efforts continue to try and diffuse the situation between Russia and Ukraine and dry weather persists in the U.S. HRW wheat areas.

Despite lower cut-outs yesterday and again today, prices continue to move higher on futures. Lower covid cases and less concern this week that Russia will invade Ukraine were also viewed as positive. The Apr contract looks poised to test the 150.00 area with limited supply expected to be the main driver, as winter weather and spring demand for grilling meats increase. Choice cuts traded at 276.35 down 1.11 this morning while select lost 78 cents now at 273.06. Feeder supplies are said to remain tight, and feedlots are bidding. Feeder futures moved higher today despite strong gains in the corn complex, a sign that supplies may be tighter than expected.

LEAN HOG HIGHLIGHTS: Hog futures, with the exception of Feb, continued their uptrend today. Tightening supply and good demand are supporting the market. Feb hogs lost 0.100, closing at 90.225 and Apr gained 0.975, closing at 104.775.

Hogs continue to show strength despite the overbought nature of futures. It should be noted that a commodity can become, and remain, overbought during a strong uptrend (especially when there are other factors at play). Most of this strength seems to be coming from the anticipation of thinning supply, and as new highs are made it causes traders to buy into the market. Cash has been volatile, but yesterday’s gain of 7.99 on the National Direct Afternoon report was impressive. There is also the issue of supplies possibly being affected by the trucker strike in Canada. Trucks are blocking some key supply routes (or at least reducing the flow). The full impact is unknown at this time but it is something to keep an eye on.

DAIRY HIGHLIGHTS: The USDA released the December dairy export data this morning and the results likely weren’t what the market wanted to see. Leading up to this report, total U.S. dairy exports had increased on a year-over-year basis in each month since February by an average of 13.00%. The USDA said that December exports actually declined 2.60% from the same month last year. Additionally, total exports were down 15.40% from November even though December has one extra day. A likely reason for the slowdown in export demand is that U.S. butter, powder, and whey prices are sitting near multi-year highs and aren’t as competitive on the global markets as they had been in prior months. If export demand tapers off, it could give reason to be cautious moving forward.