The Russian activity in the Ukraine has sent wheat prices to new contract highs.  As tensions have increased over the past couple days, Chicago wheat futures have rallied over 80 cents and pushed through the previous contract high for May wheat futures of $8.79, which was established in November.  The past two day moves has seen strong technical buying and short covering as prices broke the down trend on Tuesday and added the new contract high on Wednesday.  Managed money positioning was estimated to be holding a short position going into the week, and the quick turn technically may have caught traders on the wrong side.  Additionally, winter wheat crop ratings slipped to 26% good/excellent, bringing even more concerns about U.S. wheat supplies this summer.  The wheat market is moving quickly and will be extremely volatile to headlines, expected continued big move days and the market is processing the daily information. 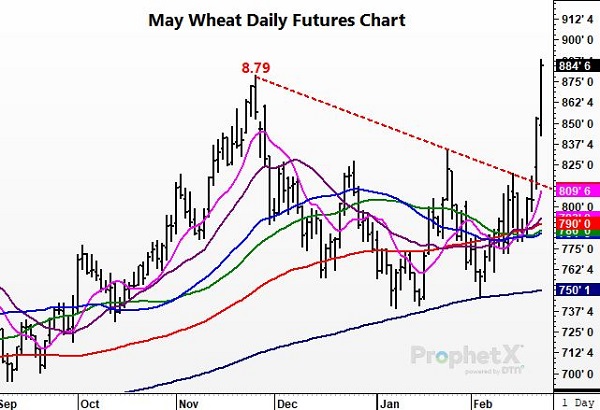 CORN HIGHLIGHTS: Corn futures closed higher for the fifth session in a row, with March gaining 9 cents, closing at 6.83-3/4, while December added 5-1/2 to end the day at 6.11-3/4, both contact high closes. Heightened tensions between Russia and Ukraine, as well as NATO countries, has the trade actively buying commodities pricing in potential supply disruptions. Technical short covering and traders adding to long positions also helped propel futures higher, as did sharp gains in both wheat and soybean futures.

Another item we’ve mentioned in recent weeks has been continuous rain in parts of Brazil where this is frustrating producers who are unable to harvest soybeans. This, in turn, suggests later planted second crop corn and consequently risk to the crop. Case in point was last year where late planted corn struggled with dry and warm temperatures and did not yield as well as earlier anticipated. Farmers selling in the US continues to move at a pace where farmers are rewarding the rally, but not wholesale dumping of inventories. This is a rather rare and unique time in history and for now, the market is pricing in significant uncertainty from supply concerns, yet keep in mind that low prices for multiple years have created a growing demand base. Strong domestic prices in Brazil suggest little exportable corn until the second crop is harvested.

SOYBEAN HIGHLIGHTS: Soybean futures rocketed higher, gaining 40 cents in March to close at 16.75. November added 14-1/4 to end the session at 14.87-1/2. It is much the same story, just a different day, tensions with Ukraine and Russia and talk of further downgrades to the South American crops are the primary supporters of price. Strong technical buying may be keeping selling at bay, while traders long continue to add to positions. New high prices were scored today with the March contract reaching 16.79-1/2, taking out the front month high from last spring of 16.77-1/2.

The market has only been at current prices but a few times historically. Typically, sharp gains in the market may end violently as prices quickly retrace. Each year and every rally are different. Worries about rationing inventory may have traders on the offensive, who are in essence buying the rumor and selling the fact. Whatever the case, the trend is steeply higher, and it is likely that traders that are long are simply adding by buying more. The most recent Commitment of Traders report indicates non-commercials are aggressively net long commodities. Today’s move might be somewhat of a head scratcher for soybean meal, which rallied sharply, gaining 12 to 17.00. Better near-term weather forecasted for Argentina may suggest the late planted soybean crops are well positioned to benefit. World vegetable oil supplies have shrunk and are a major concern as palm and soybean oil prices continue to surge. Higher energy prices provide support for soybean oil as traders view bioenergy as a contributor to tight supplies. Today’s surge in soymeal may be nothing more than traders finally latching onto a contract that may be considered undervalued compared to the price of soybeans and soybean oil, which have both experienced strong price gains in recent sessions, while soymeal has traded sideways.

Another sharp wheat rally comes on the heels of the changing Russia situation. After President Biden yesterday said he would issue sanctions against Russia, there came a reply today. The Russian government said there would be a “strong and painful” response to these sanctions, adding that sensitive US assets would be targeted. What exactly that means or will entail is not quite clear but does sound menacing. Meanwhile, Ukraine’s parliament voted to declare a state of emergency and their president, Volodymyr Zelensky, stated that reserve troops would be called up. Russia has put troops into two states, declaring them as independent and reportedly violating international law. As a result, Paris milling wheat futures were also sharply higher today, with new contract highs in September onward. MPLS futures also posted double digit gains, with the front months breaching the 10-dollar mark again for the first time since the end of December. In other wheat related news, the USDA again lowered wheat crop ratings in Oklahoma and Kansas due to dryness. Additionally, freezing temperatures have reached as far south as central Texas.

CATTLE HIGHLIGHTS: Live cattle futures traded moderately to strongly lower as the livestock complex was under pressure on Wednesday.  February cattle lost .700 to 143.050 and April cattle dropped 1.275 to 144.750.

The April contract through the 20-day moving average closed at its lowest level for the month of February. Prices look to be completing the head and shoulders pattern and a further downside move could have the market testing 142.500 and trend line support. February expires on 2/28 and expiration of the contract may be adding some market instability.  On Friday, the USDA will release the next Cattle on Feed report, and the market is positioning for those numbers.  Expectations are for: Total cattle on feed to be at 100.8% of last year, marketings at 97.3% of last year, and placements at 99.2% of last year.   Fundamentally, cash trade was still undeveloped with scattered bids available.  Some bids were being posted at $144, firmer than last week. Asking prices were firmer at $144-145 on the country side, and cash trade will likely build into the end of the week.  Retail values have been trending lower and could be getting close to a seasonal low.  At midday, boxed beef prices were mixed, (Choice: +.94 to 262.61, Select: -2.15 to 261.49) with demand was improved at 131 midday loads. The weaker demand tone is noticeable in the Choice/Select spread, which firmed at midday, but a narrow spread of 1.12 at midday, with the strength of Select beef versus Choice.  Feeder cattle finished lower, limiting gains in the live market, as a strong surge higher in gain markets again on Wednesday pressured the feeder market. March feeders were 1.450 lower to 162.775. The Feeder cash index traded .13 higher at 162.26. Cattle markets overall are still in an uptrend, but momentum has slowed. Prices may be reaching winter highs, and a potential pull back may be in front of the market as charts have turned more negative.  The price action overall is soft in the cattle market and prices are trending lower in the short-term.

The hog market was strongly over-bought, and the poor price action on Wednesday saw charts post a bearish key reversal, which could lead to additional long liquidation in the hog market.  The first level of support under the April contract could be the 10-day moving average at $106.000.  The technical weakness was seen in multiple futures contracts and the hog market may be due for a needed correction.  Fundamentals were supportive in the market on Wednesday.  Pork cutout values are still trending higher, gaining $5.45 at midday to 114.21.  Load count was moderate at 134 loads as ham and belly primal cuts supported the market.   The strong retail values have carried over into the cash market. Cash was supportive with the National Direct morning trade was unreported due to confidentiality, but the Cash Lean Hog index gained 2.93 to 98.16.  even with today’s price action, the April futures is still holding a 9.865 premium to the index, setting up some profit taking as the market nears the end of the month.  Technically, the hog market is looking to change direction, or at least see some needed profit taking.  The depth of the correction and follow through going into the end of the week will be key.  The fundamentals stay supportive, on a tighter hog supply overall.

DAIRY HIGHLIGHTS: A down day in the spot cheese market kept nearby class III milk futures on the defensive Wednesday. Milk contracts were down as many as 44c after a 1c lower spot trade in the block/barrel average. Additional pressure came from the fact that yesterday the USDA reported cheese inventories in January were up 3% from the same month last year. As has been the case for awhile now, the fundamentals for butter, powder, and whey are much more bullish than cheese. Cheese production has remained steadily higher than last year and inventories haven’t waned. The USDA released the January 2022 milk production report after the market closed today. Production in January was down 1.60% from last year with cow numbers down 82,000 head from January 2021.