Despite the global turmoil and geopolitical risk, equity markets posted a strong turn higher to end the week.  The E-Mini Dow futures traded over 700 point or 2+% higher on Friday, as price recovered off market lows from Thursday’s trade.  Closing at these levels will be the largest positive day for the Dow futures in 2022.  Ongoing concerns about monetary policy has had equity markets trending lower on the year, and the selling pressure was intensified with the Russian invasion of the Ukraine this week.  The rally started on Thursday afternoon as prices rallied nearly 1000 point off session lows and the pace held into Friday.  The buying spree was likely tied to money flow and profit taking on profitable short positions as the month of February comes to a close.  The question in front of the market – is yesterday’s low a near-term bottom? Headlines will be closely watched next week regarding the Ukraine and the Fed meeting right around the corner.  The volatility will likely be a constant going forward in the equity markets. 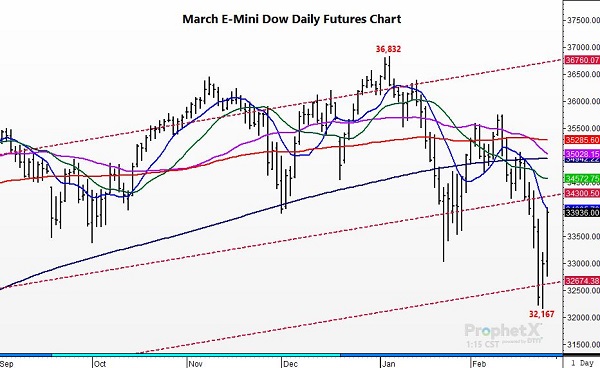 The strong pressure in the wheat market was the trigger for follow through selling in the corn market, as wheat priced traded in nearly a $1.00 trading range and finished the expanded 75 cents limit down to close the week.  The gain market, and commodities in general, were victims to aggressive profit taking, which was possibly triggered by March futures first notice day and technical selling as February comes to a close.  Technically, charts finished on the defensive and additional selling pressure could be on the books to start the week.  The overall market tone in the grain markets will likely lead the direction.  On the news front, weekly export sales for corn were above expectations at 1.041 MMT for 2021/22 and an additional 117,000 mt for 2022/23, which were above expectations.  Japan was the top buyer of U.S. corn last week.  The market is closely watching South American weather and planting pace of the second crop corn in Brazil.  Weather looks to be improving, and the large Brazilian state of Mato Grasso is at 84% planted and Brazil has a whole year nearly 2/3 planted.  The possibility of a stronger second crop corn in Brazil was likely weighing on Futures prices.

SOYBEAN HIGHLIGHTS: Soybean futures were severely lower as both traders and managed funds exit long positions, trying to avoid volatile price swings. Uncertainty over global events is at an all-time high and will affect the markets likewise. March lost 71-1/4 cents, closing at 15.90-1/4. November was down 36-1/2 cents, closing at 14.15.

Today’s action in not only soybeans but corn and wheat markets was surprising but not totally unexpected given the war situation in Ukraine. After a recent strong rally traders and managed funds seem to be exiting positions to take what gains they could. With so much uncertainty regarding the war, not to mention uncertainty about US involvement, traders on both sides of the market are nervous. While some are willing to stand pat, many others do not want to take risk during this unprecedented time and are stepping aside. While the war is headline news and the most obvious factor affecting soybeans, there are other items of note. As was stated yesterday, the Buenos Aires Grain Exchange lowered their soybean crop rating by 7% from last week to 24%. The crop reductions in South America may already be somewhat factored into the market. But what is likely not yet factored in is the shift in demand. Due to the reductions throughout South America, China may be forced to purchase more US soybeans. On that note, March soybeans on their Dalian exchange hit an all-time high – the equivalent of $24.11 per bushel. In other news, the USDA reported an increase of 45.3 mb of soybean export sales for 21/22 and an increase of 31.8 mb for 22/23.

While some traders might try to outguess the situation in Ukraine, it seems that many others are taking their gain (or loss) and running. The unparalleled moves seen in the grain markets (and wheat specifically) over the past two days are astonishing but not unexpected. As of writing, it is being reported that Russian troops are near the Kyiv, the capital of Ukraine and talk is that they will attempt an overthrow of the government. News reports today are also saying that Ukrainian citizens are being armed with rifles and are being told to make Molotov cocktails to fight back against Russian troops. There is also talk that if Russia does take over Ukraine, they might start shipping corn and wheat as soon as next week, promising China they will get the Ukrainian grains they are due. With rumors of a Russia / China alliance and talks that China may try to take Taiwan, this situation could easily turn much more dire than it already is. US futures were not the only markets hit today – Paris milling wheat futures also took sharp losses today, closing roughly 25 Euros per metric ton lower. In other news, the USDA reported an increase of 19.0 mb of wheat export sales for 21/22. The outlook for the US southern Plains is still mostly dry and remains a bullish factor.

CATTLE HIGHLIGHTS: The cattle market saw additional selling pressure in the live cattle market, but firmer trade in feeders to end the week.  A strong sell off in the grain markets supported feeders, but live cattle stayed soft following through on recent price weakness ahead of the USDA Cattle on Feed report.   February cattle lost 1.250 to 139.275 and April cattle dropped .375 to 141.925.  March feeders were .925 higher to 160.025.  For the week, April cattle lost 3.950 and March feeders were 5.400 lower.

The weak technical closes on Wednesday and Thursday opened the door for follow through selling as the market was pricing in a potentially heavier than expected Cattle on Feed report.  April cattle followed through on the head and shoulders pattern and are testing the bottom of the trading range and the 100-day moving average, which held on Friday.  The USDA Cattle on Feed report was released and total cattle on feed as of Feb 1 was 101% of last year at 12.10 million head, and at the higher side of analyst expectations.  Cattle placed in January was at 99% of last year or 2.024 million head, in line with expectations, and marketings in Jan at 97% of expectations, in line with expectations.  The slightly heavier cattle totals in the feedlots was likely priced in, but could keep some selling pressure in the market to start the week.   Fundamentally, cash trade was trading at mostly $142 this week in the South, steady with last week, and northern dress trade was mostly $227, about $1 higher. Retail values have been trending lower and at midday, boxed beef prices were firmer, (Choice: +.53 to 259.77, Select: 1.18 to 255.73) with demand was light at 71 midday loads. The weak grain markets helped support feeders on Friday.  The light placement numbers on the report should help keep buyers active looking for feeders.  The market was choppy this week, but did pull of the lows of the week, which could be supportive next week.  Cattle markets overall are still in an uptrend, the market has experience a pullback.  Fundamentals will be key next week to help determine price direction lower or some price recovery.

LEAN HOG HIGHLIGHTS: Hog futures saw more selling pressure to end the week as the market closed with triple digit losses.  April hogs lost 1.850 to 103.675 and June hogs fell 2.225 to 113.875.  Technical selling and the premium of the April futures to the cash market added to the selling pressure.  For the week, April hogs dropped 5.725, and June lost 4.750.

After Wednesday’s key bearish reversal in April hogs, the market was poised to see additional follow through selling/long liquidation.  The first level of support under the April contract is  the 10-day moving average at $106.000, which the market pushed through today, now looking to test the 20-day moving average near $103.  With the losses on the week, weekly charts posted a bearish reversal as well, which could lead to a trend lower in hogs.  The hog market was over-bought and due for a correction.  Pork cutout values are still trending higher and had a strong close on Thursday afternoon.  Friday saw additional upside at midday with pork carcasses trading 1.07 higher to 115.20.  Load count was moderate at 156 loads. Weekly export sales for pork were at 26,600 mt for 2022, up 45% from last week, but down 8% from the 4-week trend with Mexico, Japan, and Canada the principle buyers of U.S. pork. Cash was supportive with the National Direct morning trade marking a base price of 86.49, down 1.09 from yesterday and the Cash Lean Hog Index was .12 lower to 98.04.  The index was 3.80 on the week.  The April futures is still holding a 5.635  premium to the index, setting up some profit taking as the market nears the end of the month.  Technically, the hog market is making a change of direction.  The depth of the correction will be key.  The fundamentals stay supportive, on a tighter hog supply overall.  The market is still in a strong uptrend, but end of month trade will likely bring some correction.

DAIRY HIGHLIGHTS: After yesterday’s strong push to the topside, many commodities fell back to end the week and milk was no exception. In the Class III trade, the soon-to-be second month April contract closed 38 cents lower Wednesday, limit up 75 cents yesterday, and 75 cents lower today which was 18 cents off the daily low with expanded limits. Along with the heavy losses in the feed markets, the spot market added to the pressure. Spot cheese closed 6.1250 cents lower at $1.9225/lb, failing again just beneath the $2.00/lb mark. This totals 3.8750 cents lower on the week after entering Friday’s trade higher. Spot whey was unchanged at $0.78/lb today but is down 3 cents on the week. While the outside markets certainly add to the volatility, the Class III complex has clearly struggled at $23.00 milk on the second month at $2.00/lb in the block/barrel average so far through two months of the calendar year.