The hog market has seen a price recovery despite the fact the market fundamentals have stayed overall, supportive. Until Tuesday’s price recovery, Apr hogs had dropped nearly $10.00 from the most recent highs in a 4-day correction lower. The market had become overbought and the futures market was building a strong premium and was due for a correction. During that pullback on the futures, the hog market fundamentals have stayed supportive as cash prices have built a steady rally, and retail pork values have climbed higher. The CME Lean Hog Index has gained nearly 30 points since the end of December and is poised to break through the 100 point level. The index is reflective of the steady climb in cash markets, and with the pull back in futures, the gap between the two is more manageable. With hog supplies tight, retail values firm, and cash on the rise, the hog market may look to find some footing and maintain or even add back some value. 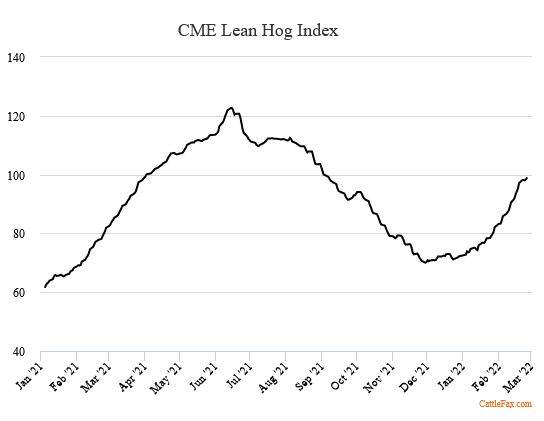 CORN HIGHLIGHTS: Corn futures finished with small losses on front months and 14 to 16-3/4 cents weaker on back months. May lost 0-3/4 cent to end the session at 7-25, however, this was well off the high of 7.47-3/4. Dec gave up 15-1/2 cents to end the day at 6.09-1/4. It appeared longs exiting after prices reached new contract highs set the wheels in motions for a down day. New highs for the U.S. dollar dating back 18 months and a lack of new news may have proven the rationale for traders to exit longs early in the session. It is likely sell stops were also pulled up tight, which when triggered were adding selling pressure.

All attention continues to focus on the war in Ukraine and Russia. Obviously, nobody knows what the next month will look like, but currently, supply logistics in Ukraine are becoming a front and center topic of discussion in preparation for the upcoming planting season. The western half of the United States remains critically dry, and while it is only early March it does appear that the longer-term forecast is shaping up for more of a warmer and drier spring, which might suggest that timely rains will be critical for good production in the year ahead. Much of the central and eastern Midwest have experienced additional rainfall throughout the mid-winter months which have not only replenished soils but in some areas could lead to flooding. We don’t think this is much out of the ordinary for this time of year, yet something to monitor as winter progresses. On a day-to-day basis, it is challenging to outguess how the market price will move yet, the big picture continues to suggest supportive due to sharp increases in energy prices as well as continued uncertainty for both the war and Brazil’s safrinha corn.

SOYBEAN HIGHLIGHTS: Soybean futures again had a large trading range with most contracts near 50 cents from high to low. At day’s end, traders moved out of longs with May giving up 27 cents to close at 16.63 and Nov closing at 14.52-1/2 down 24-1/2. Despite announced export sales this morning of 396,000 mt for 2021/2022 marketing year, delivery and 134,000 mt for the 2022/2023 futures posted losses. It looked as though the trade was interested in selling corn and beans after they reach high levels on the overnight and willing to buy front-month wheat on spreads.

StoneX also cut its soybean production forecast for Brazil to 121.2 MMT, down from 145 MMT at the start of the season and down from 126.5 last month. In January, the crush, as reported by NASS, was 194.3 mb, down 1% from a year ago. However, considering the surge in prices, this is reflective of continued strong demand. The big question is whether today was the market taking a breather or if it is running out of gas. Only time will tell, but the surge has been strong and the war a growing reality that higher energy prices may likely be here to stay for some time and that a shortfall of world vegetable oils continue to provide support for soybean oil.

As the war rages on in Ukraine – volatility remains very high. Last night President Biden addressed the situation in his State of the Union speech. He said that the United States will continue to send aid to Ukraine, but they are not a member of NATO, and therefore our forces will not engage in the conflict in Ukraine. However, U.S. forces are being sent to Europe to defend NATO members in case Putin’s troops continue to move west. What comes next is still up in the air; this war could end tomorrow or a year from now. But while Russia continues to attack key Ukrainian cities, the markets will continue to react. These explosive markets have May KC wheat trading above 10 dollars for the first time since 2008. When you consider the fact that 12-15 mmt of wheat may not be exported out of the Black Sea region it becomes clear why that is the case. Paris milling wheat futures are also at lofty levels – around the equivalent of $11.77 per bushel. Here in the U.S., the drought conditions in the Plains remain a bullish factor.

CATTLE HIGHLIGHTS: The live cattle futures saw mixed trade again on Wednesday, as front-month futures are struggling to find footing overall. Weaker retail beef prices and the lack of cash development allowed the technical selling to keep pressure on the front end. Apr cattle lost 0.425 to 140.100, and Jun live cattle were 0.550 lower to 136.500.

Apr cattle futures are trying to find some footing as the selling pressure has slowed, but prices are holding key support levels at the 200-day moving average and the trendline under the market prices. This area needs to hold, or a further downside break is possible. Fundamentally, cash trade was typically quiet to start the week, but trade was active in many areas this afternoon, with most cash at $140, down $2 from last week. Slaughter paces have ticked up with today’s estimated total at 123,000 head, and weekly pace trending 15,000 head over last week. Retail values have been trending lower, and that has limited cash bids. At midday, boxed beef prices were mixed, (choice: -1.05 to 255.63, select: +0.58 to 252.10) with demand light at 82 midday loads. The grain markets were softer overall, which helped bring the buyers back into the feeder market. The market was oversold and posted strong triple-digit gains. The Mar feeders were 2.025 higher to 158.300, while Apr added 3.200 to 163.300. The Feeder Cattle Cash Index was 0.42 lower to 159.25 and trading at a small premium to the futures market. The near-term trend is still lower in cattle markets, but markets overall are still in an uptrend. The market is in a long-term uptrend but is searching for a near-term low.

Apr hogs traded between the 10 and 20-day moving average, before settling at the top of the trading range. The firmer close could bring a push higher if futures can break through the 10-day moving average. The market fundamentals have remained strong during this price correction, limiting downside potential. Pork cutout values maintained their strong value. At midday on Wednesday, pork carcasses were higher, gaining 3.03 to 111.22. Load count was moderate at 139 loads. Cash was supportive with the National Direct morning trade marking a base price of 89.73, up 1.14 from Tuesday and the Cash Lean Hog Index was 0.57 higher to 99.66. The Lean Hog Index has gained 30 points since the lows from the end of 2021, reflecting the strong cash trend. The Apr futures is still holding a 6.640  premium to the index but feels more manageable given the strength in the cash market. Technically, the hog market may have found some support in the near term, holding the 20-day moving average. The fundamentals stay supportive overall on a tighter hog supply, supported by strong retail and improving cash values. The market is still in a strong uptrend. The key will be follow-through to help solidify the turn higher.

DAIRY HIGHLIGHTS: Class III futures were mixed, but mostly uneventful today, with the second month April contract closing down 12 cents at $23.05. We will have to see if it holds beyond its first day as the second month, but that is the first time that chart has closed above $23.00 this year, opening up the door for a retest of the 2020 peaks. The block/barrel average was up half a cent to $1.9875/lb, coming from a 2.50 cent gain in blocks and a 1.5 cent drop in barrels. Blocks are now at a 13.50 cent premium over barrels, which is a shift towards more normal levels and can hopefully aid in getting the average over $2.00/lb soon. Spot whey has traded higher only twice in the last 15 trading days, closing down 1.25 cents today at $0.74/lb, but cheese will continue to be the driving force for milk futures. While the outside markets remain unpredictable, we suggest sitting tight on supplemental milk coverage for now.