June hog contracts are either building a double top or poised to break out to new highs.  During the session on Wednesday, June lean hog futures pushed to new contract highs, taking out the 121.550 levels for February.  The summer hog months have been supported by a tight hog supply picture, a firming cash market, and the prospects of good demand.  These factors, along with money flow, have helped June hogs rally over $12 from the lows established on March 7th. After setting the new contract high, prices faded, but still helped positive gains, but sets the market up at a crossroads.  If this is a double top, hog prices could correct back to support levels, or if price strength continues, prices could push to new high and challenge trendline resistance over the market near the $124.000 area. 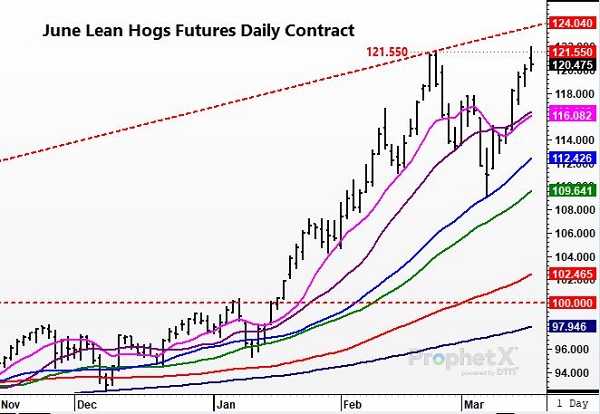 CORN HIGHLIGHTS: Corn futures plunged by mid-morning with losses of near 30 cents on the heels of limit lower wheat prices, and rumors circulating that Ukraine and Russia could be working toward a resolution and potential cease fire. Technical selling was also prominent as futures broke below the 10-day moving average, likely triggering stop orders. May corn gave up 28 cents to close at 7.30 and December lost 21.5 cents to end the session at 6.29-3/4.

The old saying is that you need to feed a bull daily to keep prices moving higher. The market looks somewhat tired after today’s trade. This is not germane to just corn futures as wheat, soybeans, and livestock futures have recently lost value. Money flow needs to continuously buy to keep prices moving higher. As we explained, when prices were on their way up, there are some types of buying that occur, which normally would not occur. This is buying due to short covering (exiting), and new buying from those who are already long the market, essentially using gains to add to positions. The same can happen when prices weaken. Sell stops (triggers below the current market price) were likely hit today, creating additional selling coupled with those who may have recently sold and may be selling more to add positions. As we indicated earlier in the week, there was likely a significant amount of farmer selling last week when prices had strong gains.

SOYBEAN HIGHLIGHTS: Soybean futures traded both sides of steady before finally ending the session weaker, down 9-1/2 in May to close at 16.49-1/4. Heavy losses in corn and wheat seemed to finally drag soybean prices lower after solid gains earlier in the session. Concerns that demand could be affected by outbreaks of COVID in China were also a factor in today’s trade. May soybeans lost 9-1/2 cents to close at 16.49-1/4 and November gave up 6-3/4 to end the session at 14.60-1/4.

The 40-day moving average acted as support for the second day in a row. The soybean market, like other agricultural markets, looks somewhat tired and warrants recommending sales to get current with cash recommendations. The problem with high price markets is they will have corrections along the way. The fundamental argument is still supportive. Often prices snap back, but what if they don’t? It could be futures are running out of gas due to a lack of fresh supportive news. The point is that corrections can quickly fall apart. It is only after prices drop into newer lower levels that you know you should have sold. The drop in crude oil prices of 35.00 from their recent contract high price and COVID concerns in China may be taking priority despite no resolution to the war and smaller South American production numbers on this month’s USDA report. Note, there were no new announced daily export sales for the second day in a row.

Several news outlets are reporting that Ukraine and Russia have made “significant progress” on a peace plan. This would include a ceasefire and withdrawal of Russian troops. However, it would likely require Ukraine to give up territory, as well as any plans to join NATO. The likelihood of this happening is unknown at this time, but is weighing on the market nonetheless. Ukraine’s President Zelensky also spoke virtually with US Congress today, in which he asked for more help. He addressed President Biden specifically, asking him to do more to help Ukraine. With rumors that the ceasefire could take place next week, the next few days will be critical. The conflict has added war premium to the marketplace with concerns of Black Sea wheat (and corn) not being shipped, as well as delays in fieldwork. Adding to weakness in the wheat market today is the weather forecast for the US southern Plains. Rain events over the next 10 days or so could bring much needed and critical moisture to HRW wheat areas. And while not having as much of a direct impact on wheat, the new lockdowns in China due to covid outbreaks are causing concern about their economy and demand for all commodities; the quarantine in Jilin province will affect about 24 million people.

April cattle, after a strong start to the session, pushed above the $140 price level, late session prices fell back below the 200-day moving average on the close, turning charts more negative on the technical side, as the price action posted a bearish reversal on the chart.  Cash trade is still slow to develop this week, but early bids were in the $138-140 ranges, which was disappointing.  Asking prices were $142, and the lack of cash trade is concerning to the market, which was hoping for trade higher than last week. Trade will likely develop in the end of the week, and a firmer cash tone will be key to support prices going into the second half of the week.  Warmer weather forecast may start boosting spring demand for beef retail values.  The retail market was mixed at midday on Wednesday, (Choice: +.60 to 258.50, Select: -.68 to 248.16) with demand light at 61 midday loads. USDA will release weekly export sales on Thursday morning, and that could help support the market after a strong week last week.  Cattle slaughter today was estimated at 125,000 head, steady with last week, but up 10,000 head from last year.  Feeder cattle futures buying support with a strong move lower in grain prices.  Despite that, the pressure in the live cattle market limited feeder gains on Wednesday.  The feeder cattle cash index was 0.33 higher to 153.14. The index is trading at a $4.11 discount to futures, and that likely limited the gains in the front month contracts. Difficult to grasp the trend in the cattle market, especially with the weak price action on Wednesday.  The technical picture turned softer, and the lack of cash trade has been disappointing.

LEAN HOG HIGHLIGHTS: Hog futures saw mixed trade again on Wednesday, as the summer months led the market higher.  Summer contracts pushed to new highs, but the premium of futures to cash limited the April futures.  Apr hogs were .025 lower to 102.375, but June hogs were .400 higher to 120.475.

The April hog contract tried to break out the trading range held in check by the 10-day moving average.  After a sharp morning open, price fell back to the 10-day moving average as support, with the 20-day average sitting over top.   Summer months maintained their push higher, with June closing back above the $120 level and establishing a new contract high.  Late session prices faded, setting up some market indecision of a possible double top, or room to move towards the $124 price level. Cash has been supportive, the National Direct morning direct trade not reported due to “confidentiality”, but the weighted average price was 102.27. and the 5-day average has trended higher, trading at 100.95.  Lean hog cash index was .36 higher to 100.49. The April futures are trading at a 1.885 premium to the index and that could limit gains. Pork cutout have been trending higher this week, and were higher at midday, supporting the futures market. Cutouts were 4.05 higher to 108.53, and load count was moderate at 163 loads. USDA will release weekly export sales before the open tomorrow morning.  The tighter supply picture, and strength in retails values have helped support the cash markets. The price action has turned more friendly, but the softer overall action could be signaling a near-term top.  We are adding additional June put coverage on the open tomorrow.

DAIRY HIGHLIGHTS: For the second day in a row, cheese sellers were aggressive in their pursuit to fill inventory while buyers were hard to find. Yesterday, blocks fell 7c on 1 load traded while barrels fell 1c on no loads traded. Again today, the block market fell 7c lower on 1 load traded while barrels were down 4c on 0 loads traded. This brings blocks down to $2.05/lb from this month’s high of $2.2325/lb. This also brings the barrel market back below $2.00/lb to $1.98/lb. The block/barrel average settled today at $2.0150/lb. The offering in the cheese trade kept milk futures on the defensive. There was also talk that Russia and Ukraine have made significant progress on a peace plan that could include a ceasefire (Source: Financial Times). This may have kept commodity futures on edge today as most products were lower. Nearby wheat was limit down (85c), corn fell 28c, beans were down about 10c, and soybean meal was down $6/ton.