Despite choppy trade, the cattle markets are trying to build an up-trend.  The past couple of weeks saw a lot of choppiness and strong price swings, but on the close on Friday, live cattle markets have finished higher for the second consecutive week.  June live cattle gained 4.125 this past week, and April added 3.200.  The main reason for support has been an uptick in demand as choice retail values traded firmer this week, possible signaling an improvement in spring demand, as temperatures have been warming and consumers are looking to fire up the grills.  The cattle market has been under strong pressure, fueled by inflation concerns and a surging crude oil market.  The strong oil prices had the market cautious that consumer discretionary income may be limited, and in that environment beef demand typically lacks.  Over the past two weeks, crude prices have softened, and money has supported the cattle markets.  With fundamentals improving, cattle producers are looking to see that strength move into the cash market.  A turn higher in cash could be the next piece to help fuel a rally higher in cattle prices. 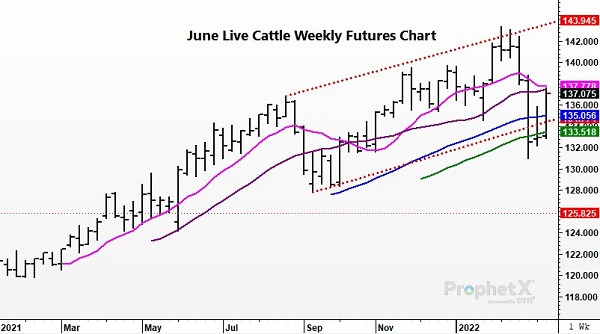 CORN HIGHLIGHTS: Corn futures were the recipient of bear spreading today, as most merchandisers have moved cash bids to July. May futures dropped 12-3/4 cents on the day, closing at 7.41-3/4. December gained 0-1/2 to end the session at 6.45-1/2. For the week, May futures lost 20-3/4 cents and December gave up 9-3/4. Good export sales were noted for the week. Support continues to come from the Ukraine/Russia war. A plunge early in the week in energy prices and sharply lower wheat may have tipped the scales for corn prices to negative territory this week.

Bullish traders have plenty of argument that corn futures may be undervalued. On the week, however, new supportive news in the form of exports and concern with Ukraine shipments and growing season couldn’t overcome the weight of what we believe was significant farmer selling in recent weeks, and some influence from outside markets. Ethanol plants are said to be mostly bought up on corn supplies for the next several weeks to several months. Nonetheless, after closing at new highs last week, the set-back in new crop December is not a surprise. On the one hand, there is a legitimate argument for higher prices, as world supplies decline and world weather remains less than ideal. One the other hand, prices are historically high and almost regardless of outlook, time of year suggests prices could be peaking. The key is to recognize we are at a point where it is not business as usual, and we need to be open to the idea that within the next six months December corn futures could trade to 4.50 or into new contract highs (above 8.50). The key is to have balanced approach building strategy to be either net long or short depending what the market does.

SOYBEAN HIGHLIGHTS: Soybean futures closed uneventfully, with May down 0-1/2 for the day and 8 cents for the week at 16.68. November dropped 2-1/2 toady and 24-1/2 for the week. A lack of fresh news today and weakness in soybean oil weighed on futures. In general, consolidation continues as the market focus on potentials for the Black Sea region as the war continues this week. Cease fire talk has made little progress as Russia stays on the offensive. A lack of daily export sale announcements was viewed as slightly negative.

Prices struggled losing some ground on the week, however, considering the amount of uncertainty and level of price, the overall changes were generally neutral. Some talk that Ukraine may move away from corn to soybean acres may have kept the trade on the defensive. However, while that theory may hold some weight, it probably is not a big factor, at least not yet. What are big factors are fuel availability, labor, and other needed supplies that may not reach their destinations in time for Ukraine growing season. Strong China buying and US beans cheaper than Brazil soybeans was supportive this week.

Weighing on the wheat market are the rains forecasted for the US southern Plains. About 40% of that region is expected to get at least an inch of rain next week. This moisture is critical to areas that have been plagued by drought conditions, but it may not be enough. The La Nina weather pattern may be strengthening again, suggesting that the southern Plains will go back to a warm and dry pattern eventually. KC wheat is the obvious candidate for price hikes if this does become the case down the road. However, the recent rally in all three wheat classes is tied more directly to the war in Ukraine. It has been almost a month since the Russian invasion began. Rumors of a ceasefire continue to circulate, but that does not seem likely at this point. Nonetheless, this is weighing on the market; if it does occur, wheat if probably overvalued (so there may have also been some profit taking ahead of the weekend). However, if the war was to end tomorrow, it still could take months before Ukraine gets back to normal. With damage to infrastructure, citizens having fled the country, and scarcity of goods and fuel, how can one reasonably expect anything less? Ukrainian farmers get about 70% of their diesel from Russia and Belarus as an example. With about three million people displaced, how much labor will be available? At this point in time, there are no good answers to these questions and many other unknowns remain as well.

April cattle pushed back above the 20-day moving average on the close, showing an improved technical picture for the end of the week.  The cattle market may need some fundamental strength to make the next leg and challenge the highs for Wednesday’s trade.  Cash trade was mostly done for the week, except for some light clean up trade on Friday.  Southern live trade was mostly $138, steady with last week, but northern dress trade was pegged at $221-222, trending $1-2 higher than last week.  The market will be optimistic for a stronger cash tone next week. The retail market showed strength today, helping support prices. At midday on Friday, boxed beef was higher, (Choice: +2.56 to 259.61, Select: +.83 to 251.51) with demand light at 52 midday loads. A strong close in the retail values should help support the idea of firmer cash markets next week and help support the open on Monday morning.  Feeder cattle futures saw mostly triple digit gains and prices rebounded on Friday.  A steady to lower grain market and the live cattle strength added to the buying support.  A concern in the feeders is the premium of the futures market to the cash index, which could limit gains.  The feeder cattle cash index was .62 higher to 154.85. The index is trading at a $2.15 discount to futures and that likely limited the gains in the front month contract, as March feeders were .400 higher to 157.00. The cash market will still be the key as cattle markets are trying to build a path higher.  Gains may be limited with overall demand concerns and available consumer dollars.

The April hogs stayed with the downward momentum to end the week as prices challenged the next level of support at the 50-day moving average, near $99.000.  Ths is a retest of the low from March 7, and a key level of support.  Failure here opens the door for additional downside, with a possible test to the 92.000 level.  That weakness would likely spill into the summer month contracts, so the price action on Monday will likely be key. The weakness has been more technically driven, as fundamentals have held support.   Cash has been supportive but traded lower on Friday. National Direct morning direct trade was 3.12 lower to 103.70, but the 5-day moving average has climbed to 105.93 with this week’s strength.  Lean hog cash index was .36 higher to 100.77. The April futures has dropped to a discount to the index, which could support the front month. Pork cutouts have been trending higher this week and were stronger at midday. Cutouts were 4.71 higher to 109.91, and load count was light at 104 loads. Some of the pressure in the hog market this week may be tied to the news the USDA will allow three plants in increase production capacity and chain speed.  This should provide some short-term support in the cash market but add additional pounds of production to the back end.  Estimated slaughter this week was 2.377 million head, steady with last week, but still 70,000 under last year as tight hog supplies are still in the market picture.   The price action has turned more negative with technical selling on Thursday as the softer overall action could be signaling a near-term top.  The market looks poised to test lower levels of support unless the fundamentals encourage the buyer to see a value.

DAIRY HIGHLIGHTS: Class III milk futures had an up-and-down week as commodity market pressure and the spot cheese trade have kept price action volatile. The commodity market ran into some selling pressure earlier in the week on talk of a ceasefire between Russia and Ukraine. There was speculation they could be headed toward a peace agreement. At the same time, cheese sellers were getting aggressive, and cheese buyers were nowhere to be found. The block market was down a total of 14c on Tuesday and Wednesday combined, while barrels fell 5c over that stretch. It had looked at the time like spot cheese was on the verge of losing the $2.00/lb level. By week’s end, commodity pressure eased and cheese buyers returned to buy 8 loads of blocks and 16 loads of barrel cheese. This put the block/barrel average back up to $2.08/lb at week’s end.