USDA Cold Storage report on Friday showed that overall pork supplies remain light from a historical perspective, but supplies are continuing to grow.  The total inventory of pork in cold storage at the end of March was 487.2 million pounds, 8% higher than a year ago, but 14% lower than the five-year average.  At the end of March, the total supply of bellies in cold storage was 56.8 million pounds, 60.4% higher than a year ago and 12.6% higher than the five-year average. Inventories increased 13% from the previous month, compared to a 9% average increase in the previous five years.  The rise in stock piles in March, which is typically a month we see some decline, may be due to a slower export market as current sales are on the decline from previous years.  In addition, pork carcass weights have been above historical averages, which brings additional pounds into cold storage.  The retailers may now be looking to grow retail supplies as the market has moved past the Easter holiday and begin building for summer demand.  Poor and cooler weather for a good portion of the country has slowed some of the early season demand typically expected in this window.  Stock pile should begin to draw down, and that could be reflected in future Cold Storage reports. 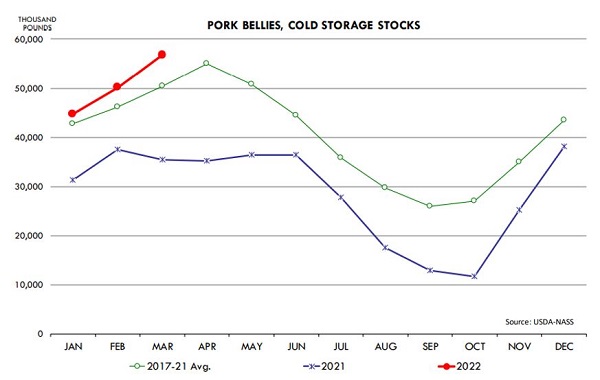 CORN HIGHLIGHTS: Corn futures weakened on the over-night following a drop in energy prices, with crude oil losing more than 5.00 per barrel. Concerns that additional lockdowns in China due to covid is keeping demand, especially at higher prices, on the front burner of concern. Yet, less than ideal weather forecasted for the Midwest and buyers believing a setback of near 30 cents on July futures is an opportunity to start owning, provided support today. Price bounced off support with July gaining 9 cents on the session, closing at 7.98 and December added 9-1/2 to end the session at 7.34. December 2023 led all contracts gaining 14-1/4, closing at 6/69-1/4. Export Inspections at 65 mb were above the range of estimates, providing support.

Year-to-date export inspections are 1.373 bb or 54.92% of the total expected sales of 2.5 bb. Attention turns to weather, the war, and exports. No matter how you slice it, it is just a little soon to ring the bell on planting delays and yield loss. Yet, it can’t be ignored either. Anxiety is beginning to grow, especially for those who should be deep into the planting season. The Dakotas could be most problematic with a wet 10 day forecast in areas that still either have snow on the ground or have saturated soils. We are just not convinced lockdowns in China suggest less demand. On the contrary – it could be logistical issues to plant a crop in China. Lastly weaker gas and diesel demand in the U.S. this last week has a slightly negative tone.

SOYBEAN HIGHLIGHTS: Soybean futures followed the energy complex lower, losing 12-1/2 cents in May to end the session at 17.03-1/2, while new crop November gave up 11 cents to finish the session at 14.94-1/2. Some concern that wet weather could mean corn to soybean acres may have had traders buying corn late in the session pushing prices into positive territory, while soybeans failed to muster a rally. Futures did finish well off their daily low, yet the technical picture looks soft with November back under 15.00.

Today’s finish had you hedging November. We are not married to hedges this time of year, yet when futures break support, we want to be ready for further price declines. Diesel demand down over 2% this past week and word today that Indonesia would allow some exports of palm oil had soybean oil prices on the defensive. We have suggested that volatility will remain high. One week the news will be negative suggesting prices are over-priced and the next week news will suggest rationing of supply is needed. This is the expected norm in tight supply high price markets. Fuel consumption is likely to be down in the range of 20% for April due to lockdowns. This had prices on the defensive early as energy took at hit with crude suffering losses of 5.00 or more.

WHEAT HIGHLIGHTS: Wheat futures were mixed today. Generally, the war and weather are supportive to prices, but talk that China may be locking down more major cities has pressured energies and commodities. While not having as much of a direct impact to wheat, weakness in other commodities may have contributed to selling pressure overall. May Chi lost 3-1/2 cents, closing at 10.62 and July down 2-3/4 at 10.72-1/2. May KC gained 2-1/2 cents, closing at 11.45-1/4 and July up 3-1/2 at 11.53.

In a similar way to Friday’s session, Chi wheat posted modest losses while KC posted modest gains. KC continues to gain on Chi due to the drought conditions in the southern plains. Some reports out of that area last week had 90 degree temperatures and 50 mile per hour winds. The seven-day forecast does show chances of rain for the eastern edge of the HRW wheat area but as you move west it gets drier and drier. In the north, Montana and North Dakota received another winter storm and there are reports of flooding in parts of North Dakota as well. It looks like it will be some time before spring wheat can be planted there, which helped to rally MPLS futures today – the May contract was up 16-1/2 cents to 11.76-3/4. From a global point of view, fighting in Ukraine continues in eastern and southern areas but some winter wheat may be harvested in western areas. This will obviously still come with risk, and shipping becomes another worry. Russia is said to be shelling most, if not all, of the Ukrainian port cities. Putin appears to want to take over the Ukraine ports, which might suggest (if he is successful) no Ukrainian exports. In other news, today’s weekly inspections report showed wheat inspections at 10.6 mb with total inspections now at 675 mb.

CATTLE HIGHLIGHTS: Live and Feeder cattle futures were under selling pressure from the open on Monday, as the market priced in the heavier than expected cattle on Feed Report from Friday last week.  April cattle fell 3.350 to139.100, and June cattle dropped 3.00 to 135.425.  May feeders were 2.575 lower to 161.300.

With the April 1 cattle inventory the highest on record, the market needed to balance the new supply picture.  Cattle markets opened strongly lower and under recent support levels, adding technical selling into the mix to start the week.  Prices opened with a large gap lower but did come off session lows.  June cattle closed back under the 200-day moving average, which will likely keep the selling pressure in front of the market going into Tuesday.  In daily fundamental, cash trade was quiet to start the week as show lists were getting put together. Expectation will be for firmer trade again this week, but the Cattle on Feed numbers may limit that enthusiasm. Like last week, the direction of the cash market will have a large impact on futures prices.  Boxed beef prices were mixed at midday (Choice 266.94 -.97, Select 256.46 +1.69) on movement of 31 midday loads. On the week, Choice carcasses were traded $1.69 lower on the week last week, and that trend could limit cash bids.  Feder market saw follow through selling pressure, triggered by the larger than expected placement numbers on the report from Friday.  A firming tone in the corn market added to the pressure in the feeder complex to start the week.  The cattle market was building a good trend last week fueled by the cash market, but the heavier than expected cattle on feed numbers quickly turned the charts more negative.  It will still be the development of the cash market that may set the trend again for the market later in the week.

LEAN HOG HIGHLIGHTS: Hog futures saw strong selling pressure in the front end of the market fueled by additional long liquidation on a buildup of pork supplies.  May hogs 4.050, closing at 107.800 and June closed the 4.750 limit lower to 114.025.

June hog futures broke down technically, stopping limit down on top of the next support level of $114 price area.  The limit down close will give the hog complex a $7.000 trading limit on Tuesday.  The next down side target for June hogs is the 100-day moving average at $109.  The market could be a value at those levels.   Cash markets have been finished last week softer, and Midday direct trade was lower, losing -2.63 to 95.60, and the five-day average settle to 100.86. The lean hog index gained 0.42 on the day to 101.67. The strong cash premium to the cash market is still a concern and will stay as a limiting factor to near-term rallies, especially with the market on the defensive.  May hog futures is still trading at a 6.130 premium to the index, and June is 12.335 over.  Pork retail values were 2.32 lower at midday to 108.96, following a disappointing close on Friday.  Product movement was light at 147 loads. Estimated hog slaughter to start the week was 465,000, down nearly 15,000 from last year, but growing pork supplies are likely reflection the heavier overall slaughter weights, and the slowing export demand seen for U.S. pork and that is a macro concern that is pressuring the hog market. Lean hog charts look defensive going to start the week, as growing pork supplies, and cash market premium are a concern. The short-term path still looks lower trying to find a near-term low.

DAIRY HIGHLIGHTS: Class III milk futures started Monday’s trade with strong double-digit gains, but those were erased by this afternoon. That being said, the second month May contract has moved nearly a dollar off its low from last week, a positive technical reversal after the market fell from all-time highs. Spot cheese was unchanged today after a quiet week last week, and the average is sitting just 2.50 cents beneath its recent high, while spot whey was a couple pennies lower in Monday’s action. Class IV trade was mostly lower with the June through November contracts down 14 to 24 cents, although volume was almost non-existent. Spot butter, after falling 8.75 cents last week, fell another penny to $2.6575/lb.