The weekly USDA crop progress numbers continue to show a very slow starting pace for this year’s corn crop.  As of April 24, the U.S was 7% planted, which was down from 16% last year and a 5-year average of 15%.  the slow starting pace was the lowest totals since 2013.  The key “I-states” are well behind the pace with Indiana at 15, Illinois at 2% and Iowa at 2% completed as of the report date.  The cooler weather forecast and forecast for additional precipitation going into next week does have the market anxious and looking to add some premium, even though planting pace will be more of a concern  as the market moves closer to the middle of May.  Regardless, the grain markets are anxious about any possible headlines that could tighten grain supplies further, and the slower planting pace is bringing some buying support into the markets. 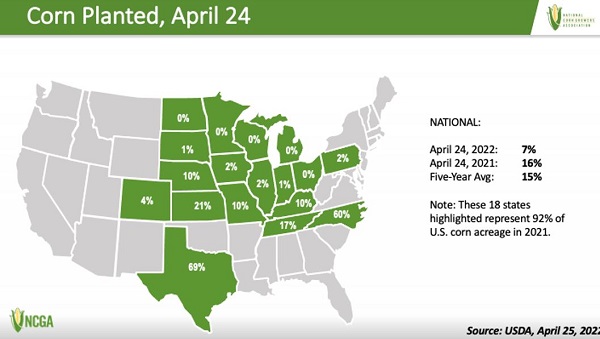 CORN HIGHLIGHTS: Corn futures had a rather volatile session ending the session on a firm note, with back months the recipient of additional strength on growing planting delay concerns. July gained 3-1/2 cents to end the session at 8.01-1/2 and December added 9-1/2 to close at 7.43-1/2, well off the low of yesterday, 7.14-1/2. A cool forecast for the northern Midwest (snow in parts of the Dakota’s) and above normal precipitation suggests further planting delays. Bottom line, not the best start to the planting season. Higher wheat and energy prices provided support as well.

The key for now, at least perceptively, is planting progress and expectations. Corn planting is off to a slow start with only 7% completed versus the 5-yr average of 15%. Top states: Iowa 2% (15%), Illinois 2% (21%), Nebraska 10% (11%), Minnesota 0% (10%), Indiana 1% (10%). So, does it matter? In April, we still can’t bring ourselves to put a lot of stock into correlation to yield drawdown. Yet, it is not an ideal start. The most recent 6 to 10-day forecast has most of the Midwest above normal in precipitation and the northern regions below normal in temperature adding stress to plant timely and logistically, in a year of tight supplies and labor, have all move forward without delay.

Announced export sales of 132,000 mt for China for the 2022/2023 marketing year and 133 mt to unknown destinations (78,000 mt for this year and 55,000 mt for 2022/2023) were supportive and continuing to suggest end users are anticipating supplies could be tight into the fall months. Support for oil came from news the Indonesia intends to tax refined oil, but not crude. This suggests tight supply. The bearish factor, and perhaps most reasonable, explanation for bear spreading is increased covid concerns from China. Additional lockdowns suggest lower near-term usage. This may make some sense from an energy consumption argument (bio-diesel), but not a long term consumer function.

Yesterday afternoon’s Crop Progress report showed a decline in winter wheat condition to 27% good to excellent vs 30% last week (and 49% last year). The poor to very poor rating came in at 39%, compared with 37% last week (and 19% last year). Conditions are the lowest since 1996. According to some “boots on the ground” reports, the extreme weather in southwest Kansas, southeast Colorado, and the Texas / Oklahoma panhandles will lead to zero wheat being produced in some areas and the drought is becoming more of a concern each day. Looking North, spring wheat is 13% planted vs 15% average and is 2% is emerged vs 4% average. Also, the cold and wet weather in the northern Plains looks like it will cause further delays to the spring wheat seeding there. When looking at Minnesota and North Dakota specifically, MN is 0% planted vs 8% average and ND is 4% planted vs 8% average. In other news, the Ukraine war remains a bullish backdrop for the wheat market. The only new reports out of that region are that Russia is again attacking central and western Ukraine cities. On a bearish note, Stats Canada estimates their wheat acreage up 1.6 to 25 million acres. Additionally, while likely not having as big of impact on wheat as say, soybeans, it is also noted that the increasing covid cases and lockdowns in China may impact their demand for commodities and energies. With reports earlier in the year of dryness in their winter wheat areas, this could become more significant over time.

Cattle futures rebounded slightly on Tuesday after Monday’s strong trade lower.  Even though the market had positive gains, trade on Tuesday was at the lower end of Monday’s trade and was consolidative in nature.  Charts did hold near-term support at the 200-day moving average, but are still susceptible to more downside pressure.  The cash trade helped trigger the buying support for Tuesday as light early trade began to develop.  Southern cattle are beginning to trade for $140, fully steady with last week, and the North is seeing cattle sell for $232 dressed, $2.00 higher than last week, and $145 to $146 live, steady to $1.00 higher. Packers were aggressively bidding for cattle, which demonstrates that packers are short bought going into the week. Trade was light and more trade is expected to develop Tuesday afternoon and into Wednesday.  Boxed beef prices were mixed at midday (Choice 265.62 -.98, Select 257.29 +.77) on movement of 91 midday loads. The feeder market failed to find a bid, despite the stronger tone in the live cattle market.  A firmer tone in the grain market helped pressure feeders, with the strong selling strength in the deferred contracts. The cattle market may be at a crossroads, as the heavier cattle on feed numbers from last week are a limiting factor in the market, despite a stronger cash tone.  Prices will need to see some further recovery in order to show that a near-term low maybe in place.

LEAN HOG HIGHLIGHTS: Hog futures saw strong selling pressure in the front end of the market fueled by additional long liquidation as prices continued to break down technically.  May hogs were 2.600 lower to 105.200, and June closed 2.850 lower to 111.175.

June hog futures saw additional technical selling as the market continues to move premium to the sidelines.  The 100-day moving average is at $109.300, and could be a support point on the charts.  In the bigger picture, June hogs are completing a potential head and shoulders pattern, that if complete could bring a test of trendline support under the market at $97.50 for a potential target.  Cash markets have been softer, adding to the selling pressure.  Midday direct trade on Tuesday was slightly firmer, gaining .14 to 95.74 and the five-day average settled to 100.30. The lean hog index gained 0.83 on the day to 102.50 as the index has trended higher. The strong cash premium to the cash market has been removed quickly with the futures selling pressure, but is still a limiting factor to near-term rallies, especially with the market on the defensive.  May hog futures are still trading at a 2.700 premium to the index, and June is 8.6750 over.  Pork retail values were .21 lower at midday to 105.58. Product movement was light at 178 loads. Estimated hog slaughter to start the week was 465,000, down nearly 15,000 from last year, but growing pork supplies are likely reflecting the heavier overall slaughter weights, and the slowing export demand seen for U.S. pork and that is a macro concern that is pressuring the hog market. Lean hog charts look defensive, and the fundamentals are still placing in supporting the market.  The path of least resistance at this point still looks to be searching for a low.

DAIRY HIGHLIGHTS: Selling pressure in the individual class IV products has gotten stronger in recent sessions, and Tuesday’s trade saw both products close at new monthly lows. The powder market is currently down 13.75c so far this month after falling 4.75c on Tuesday to close at $1.7075/lb. The powder market hasn’t had an up day since April 14. Additionally, the butter trade is down 5c so far this month and closed Tuesday at $2.65/lb. Butter has closed lower four days in a row and has now gone two days without a purchase from the buyers. The weakness in these two products is starting to spillover into the class IV milk futures market. Second month class IV fell 26c today, while August 2022 class IV fell 49c.