In the cattle industry, a close eye is kept on pasture and range conditions, which are the lowest in the 21st century this spring. Pasture and range conditions are scaled on an index, and current values as of May 1 are historically low. Those ratings saw 17% very poor, and 31% poor, while only 1% of pasture land was rated excellent. The ongoing heat and drought conditions in the southern Plains have continued to weigh on the quality of pasture in that region. This has had an impact on cattle flow and numbers this spring. Recent Cattle on Feed reports have shown larger than expected placement numbers, as cattle lacking grazing land are moved into feedlots earlier than anticipated. Cow and heifer slaughter has been elevated again this year, as the poor pasture and high feed costs have caused cattle producers to limit herd growth and move more animals off the operation. With no change in the weather on the horizon, the poor pasture conditions will keep cattle numbers trending lower, which should stay favorable for the longer-term picture in cattle prices. 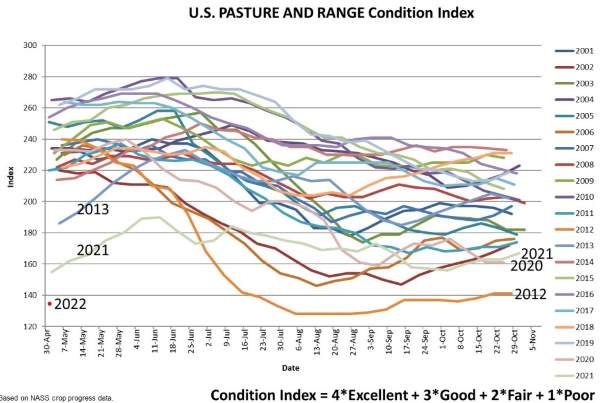 CORN HIGHLIGHTS: Corn futures closed with strong losses, dropping 11-1/2 to 19 cents lower to end the week. The grain markets saw overall selling pressure, influenced by outside markets, and an improved weather forecast for the Corn Belt that may improve the planting pace. Jul corn dropped 12-3/4 cents to close at 784-3/4 and Dec fell 17-3/4 to close at 7.20-3/4. For the week, Jul corn traded 28-3/4 cents lower, while Dec lost 30-1/2 cents.

Selling pressure started on the overnight session, as the grain markets reacted to the strong selling pressure in equity markets late Thursday afternoon. The selling pressure in both markets stayed consistent through the day on Friday, providing the weaker tone. In addition, weather forecasts going into next week are staying more friendly to supporting planting pace for large portions of the Grain Belt, as most of the region is forecasted for warmer temperatures. The cool temperatures and frequent moisture have had the current planting pace historically behind schedule. With the technology available today, the market is anticipating that will quickly pick up pace over the next handful of days. Price action was weak through the day, and the weekly close lower was the first down week in the corn market in the last four weeks. The technical picture is also concerning with a close under the 20-day moving average, and Jul posted its lowest close since mid-April. The prospects of improved planting pace and technical weakness had funds taking profits going into the end of the week. The corn market will be keeping a close eye on the estimates for the Brazilian crop forecast. Hot and dry weather is looking to continue, and analysts will likely be making additional adjustments lower on the Brazilian crop, but it may not be enough to outweigh the pressure in the market from improved planting conditions here in the U.S.

SOYBEAN HIGHLIGHTS: Soybean futures traded sharply lower today as improvements to the weather outlook may allow planting pace to quickly increase. The lower trade in soy products also did not allow any room for a rally. Jul lost 25 cents, closing at 16.22 and Nov was down 21 cents at 14.70-3/4.

Lower meal and oil today were unsupportive, and soybeans just could not find any footing. The weather looks to be improving in much of the Midwest, which should allow the planting pace to pick up quickly, and the anticipation of this likely put pressure on the market as well. Sharply lower palm oil does not help the situation. It is not clear yet whether or not Indonesia will stop palm oil exports, but Malaysian palm oil stocks at the end of April are expected to be up 5%. The fact that the stock market was sharply lower yesterday (and to a lesser extent today) may have also somewhat spilled over into commodities. Despite these things, there is some bullish news – March 31 – Canadian canola stocks are the smallest since 2005, according to Stats Canada. Additionally, Argentina’s soybean harvest is said to be 55% complete but has a rating of only 16% good to excellent.

After trading both sides of neutral the mixed close in wheat may signify the battle going on between the bears and the bulls. As we mentioned yesterday, the Oklahoma Grain and Feed Association is estimating the Oklahoma wheat crop at about 50% of last year (57 mb vs 115 mb). The drought conditions and high winds in many areas of the southern Plains have done no favors for the crop and this data exemplifies that. And, this year every bushel will count when you consider the fact that Russia appears to be strategically attacking supply routes and grain infrastructure in Ukraine. Paris milling wheat futures have also been on the rise as some dryness in Europe may threaten their crop. In the face of all these things, the markets today seemed to take a risk-off posture on talk of improving weather for much of the Midwest. Additionally, the stock market tumbled yesterday and was lower again today. Some of this pressure may have spilled over into commodities with some analysts suggesting that portfolio managers should exit commodity and equity markets to stand on the sideline for now.

CATTLE HIGHLIGHTS: Live cattle futures finished with moderate losses as prices finished from 0.275 to 1.025 lower to end the week. Cattle prices saw additional technical selling with overall weak price action as the market worked lower off the highs from earlier in the week. Jun cattle led the market lower losing 1.025 to 132.750, and Aug cattle dropped 0.675 to 135.350. In feeders, May feeders traded lower, losing 0.775 to 159.550, but the remaining contracts were higher with Aug 0.325 higher to 174.700. For the week, Jun live cattle traded 0.100 higher, but at the bottom of the range for the week, and Jun feeders used corn price weakness to gain 6.425 on the week.

Jun live cattle have struggled in the second half of the week after failing at resistance at the 200-day moving average, and with the soft price action on the week, look vulnerable to additional downside pressure next week. Prices traded and held last Friday’s low of $12.500, and this will be a key support level going into next week’s trade. The cash market traded steady on the week, and that was disappointing to the market, leading to the end of the week selling pressure. Light cash trade was seen on the week with $140 cash trade in the South, steady with last week, and North ranging around $146. Northern dress trade was at $232, again steady with last week. Today’s slaughter totaled 121,000 head, 3,000 more than last week, and 10,000 greater than a year ago. Saturday’s kill is estimated at 49,000 head, bringing the weekly total to 657,000 head, 8,000 larger than the prior week, and 18,000 above 2021. The heavier slaughter tone still indicates the market has plenty of cattle to work through in the near term. Beef retail values at midday saw carcass values trade mixed (Choice: -0.48 to 254.70, Select: +0.62 to 246.43) on movement of 60 loads. Choice carcass values trended lower on the week, which helped pressure cattle prices. The feeder market was supported by a weak tone in the grain markets on Friday.  May feeders were pressured by the premium over the Feeder Index, which gained 0.01 today to 155.60, but trading nearly to a $4.00 discount under the May futures. Despite some end-of-the-week selling pressure, feeder cattle charts used the corn market weakness to post good weekly gains, but the action of the grain markets will stay as a trigger for buying or selling in the feeder market. Live cattle markets look concerning with the weak close on the week. The steady cash tone and demand concerns overall have live cattle charts looking weak and holding on to support. The price action early in the week will be key. Feeders consolidated at the top of the week’s trade but will be vulnerable to grain markets for direction.

LEAN HOG HIGHLIGHTS: Hog futures saw the sellers step back into the market to end the week, as hog futures closed the week with strong triple-digit gains, keeping front-month futures tied closer back to the cash market. May hogs traded 0.600 lower to 102.200, and Jun led the market lower losing 2.975 to 104.100.  For the week, May hogs settled 1.300 higher, but the more actively traded Jun contract lost 2.275.

Jun hogs had a disappointing day overall, but in the big picture, prices consolidated this week. The 200-day moving average still acts as key support and may be tested again next week, as determining a price low is a process. The May contract is still tied to the cash index, and prices recovered back above the index during the week. The index traded 0.08 lower on Friday to 100.96 and is holding a small discount to the futures. For the week, the Lean Hog Index was 0.85 lower overall. The cash market still looks to be an issue, limiting the front end of the market. In morning direct cash trade, prices were 1.13 lower to 100.45 and a 5-day average of 101.46. Retail carcasses were softer at midday, slipping 0.08 to 106.19 on light demand of 169 loads. Carcass values, in general, have been choppy trending slightly lower on the week, so the afternoon close will be key for price direction going into Monday. Weekly hog slaughter, without Saturday estimates, stands at 2.427 million head, nearly 40,000 more than last week, and 30,000 over last year. This large hog number and heavier hog weights have been a limiting factor in the current hog market. Finding a low is a process, and the price action to end the week has summer hogs pointing to a retest of that potential low next week. The fundamentals just aren’t there to provide the overall support, as prices consolidated on the week. Price direction early next week will be a key.

DAIRY HIGHLIGHTS: Class III futures started the week with two down days followed by a couple days of recovery, but prices turned red again during Friday’s action. The second month June contract finished today at $24.46, down a dime on the week and in the middle of about a $1.40 range. Spot cheese finished the week a penny higher, an impressive feat given the milk volatility and hefty drop in GDT prices. For Class IV, the price action this week was also up-and-down, but the June contract closed 30 cents lower, its fourth negative weekly close in a row. Spot butter was down 3.50 cents, with a close at $2.64/lb, still managing to avoid a selloff from multi-year highs so far.