Economic concerns triggered a market wide sell-off on Tuesday, led by a strong drop in equity prices.  The equity markets are worried about the U.S. economy due to seeing strong selling pressure that was triggered by poor earning results for Wal-Mart and Target on Tuesday.  The two retail giants missed expectations due to impacts on the consumer regarding inflation and spending, and supply logistics issues, as these concerns led the market lower on the over-value of equity prices, and the possibility of a recession.   The strong selling pressure rippled across the majority of the markets in general, as money moved quickly to the sidelines.  Late in the trading session, the E-Mini Dow June futures was trading over 1000 points lower, and likely too close at a new final trade low.  Only the trade of 31,148 for May 12 is the next support under the market and will likely be tested.  The equity markets have moved into bear market territory, and in the near-term, the path lower looks to be the easiest path to follow. 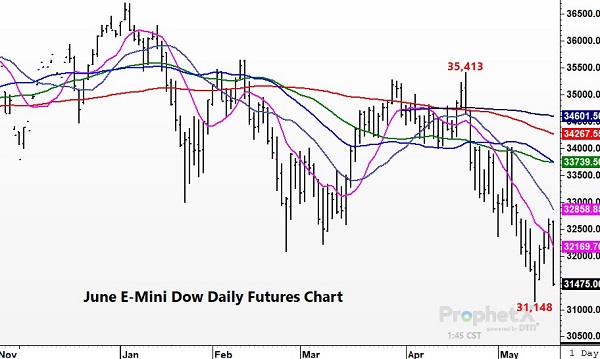 CORN HIGHLIGHTS: Corn futures followed most all other markets, whether they were commodities or equities, to the downside, suffering double digit losses. July corn lost 19-1/4 cents, closing at 7.81-1/2 and December gave up 20-1/2, ending the session at 7.40-1/2. A general risk-off session, perhaps stoked by additional lockdowns in China, had traders exiting long most anything, this despite forecasts that suggest continued planting delays in parts of the Midwest.

There are some days where it is difficult to point to any one reason, let alone any number of reasons, why prices are down. Lower energy prices, sharply lower competing commodities, and some thought that rain makes grain all may have pressured prices. Whatever the case, futures had a weak trading session, but we don’t want to read too much into it, at least not yet. We anticipate volatility to remain high because prices are high. Typically, toward the end of May, prices slide as planting wraps up, the crop emergences and if it in relatively good shape there is not much adverse weather to deeply affect its early growth. At the same time, Brazil’s second crop is beginning to mature, which also can add downward price potential. However, this is not a typical year. Events, both domestically and worldwide, are changing rapidly. From Ukraine, to Covid, to tightening world inventories, there is something almost daily to affect prices. The bottom line is prices will be active. Stay with a mindset of a balanced approach between cash sales, puts, and calls/re-ownership. Corn used for ethanol production this last week was 100.606 mb, or slightly above the weekly average to meet the USDA projection of 5.35 bb. The upper Bollinger band acted as resistance this week.

SOYBEAN HIGHLIGHTS: Soybean futures were lower today, mainly with bearish influences from outside markets, rain in the forecast East of Nebraska and Kansas, and a drop in soybean meal. July soybeans lost 15-1/4 cents, closing at 16.62-3/4, and Nov lost 26 at 14.99-1/2.

The stock market and nearly all commodities closed lower today, and soybeans were no exception. Following worries about weather and planting, now there is almost no drought on the US drought monitor East of Nebraska and Kansas. Rain has fallen from Missouri to Wisconsin and has moved through the eastern Corn Belt. Soybean meal and oil have also fallen lower, which has provided strong support for soybeans. Crush value has dropped a bit, but is still 2.69 above the cost of a bushel of soybeans, which continues to offer incentive to processors. Overall, the fundamentals are still bullish, but at these prices a lack of bullish news or a sharp drop in equities like seen today can hit the grain markets hard. The question is if this trend lower will continue over the next few days or is an opportunity for bulls to jump in?

It was a rough day for wheat, but it was not alone. Soybeans and corn posted double digit losses, softs and energies are lower, metals are lower, cattle finished lower, and as of this writing, the DOW is down over 1000 points. There is not much fresh news in the wheat market specifically, but with most markets down, it seems to just be an off day. After recent talk that China may ease covid restrictions, now some reports suggest that they may actually increase lockdowns in Beijing. This remains to be seen, but does cause concern for their economy and commodity demand. Additionally, there was news that earnings reports for Walmart and Target came in much lower than expected and may have, in part, put pressure on the stock market. General concerns about an economic recession are also a on the minds of traders. If one really wants to search for a reason why wheat was down, you could point to a seven-day forecast that should bring moderate rains to parts of the southern Plains. Even with this rain though, the HRW crop may be somewhat past the point of no return. In other words, yield could be stabilized, but probably won’t increase. In other news, the annual Wheat Quality Council tour on its first day estimated an average yield of 39.5 bushels per acre, compared to 59.2 a year ago.

CATTLE HIGHLIGHTS: Live cattle futures finished with moderate losses as the cattle market was influenced by the selling pressure across the markets in general on Tuesday.  The consumer regarding the U.S. consumer and disposable income due to price inflation weighs on the cattle market in general.  June live cattle slipped 1.500 to 131.500, and August live cattle fell 1.775 to 131.700.  In feeders, despite selling pressure in grain markets, August feeder were .975 lower to 165.800.

June live cattle posted their lowest daily close since October, as price action stayed weak, testing the most recent lows.  The low range close keeps the market very cautious and further selling pressure on Wednesday is likely.  The impact of strong selling pressure in the equity markets resulted in spill over selling into the cattle complex.  The tone in equites prices on Thursday will be a factor for the cattle market open.  The cash market saw additional light trade on Wednesday, running steady with trade earlier in the week.  The cash market this week has seen southern deals were being established at $138, down $2 from last week’s levels.  Northern dress trade was at $226-$227, $2-3 lower than last week.  Retail beef at midday, prices were mixed with Choice gaining .59 to 261.07 and Select was 2.19 lower to 246.000. Load count was light at 84 midday loads. Thursday will give a picture on global demand with weekly export sales announcements before the market open.  Wednesday’s estimated slaughter totaled 125,000 head, even with last week, but 5,000 more than a year ago, as cattle numbers stay relatively heavy.  The USDA Cattle on Feed report out on Friday, and that could keep the market choppy for the remainder of the week.  Analyst expectations for the report are showing total cattle on feed at 101.5% of last year, placements at 96.5% of last year, and marketings at 97.9% of last year.  Feeders saw modest losses, despite a weak trend in the grain markets on Tuesday.  The weaker tone in live cattle futures and the risk off trade in the markets in general weighed on feeder prices.  The premium of front month contracts to the feeder cash index is still concerning, with August trading at a $10 premium to the index. Feeder cash index was .22 lower to 155.05. The cattle market still looks concerning for further downside pressure. The cattle market is struggling with a softer cash tone, and the macro picture of demand concerns in general from the U.S. Consumer.

LEAN HOG HIGHLIGHTS: Hog futures bucked the trend in the markets on Wednesday, rallying into the close to finish higher on the trade.  An improved cash market and retail tone have provided the strength under a strongly oversold market.  June hogs finished .950 higher to 106.100, August hogs added .775 to 108.525.

June lean hog futures finished higher for the 4th consecutive day, as buyers have been supporting an improved technical picture in the market.  The June contract traded back above the 10-day moving average and challenged the 20-day moving average on the close Wednesday.  Additional money flow may have the hog market looking to recover back to a possible test of the 100-day moving average at $110.00, with short-term resistance at the $107.000 level. Demand will still be a big concern as retail prices have struggled, but have trended higher this week on good product movement to start the week.  Midday carcass values were 3.07 higher to 105.18. Movement was lighter at 139 loads. At 105.00, this was the highest midday trade in over a week. The CME Pork Cutout Index has been trending lower, reflecting the recent weakness, but turned higher Wednesday, gaining .43 today to 100.66.  USDA will release the weekly export sale report on Thursday morning, and that could help provide some direction for the open.  The support in the market has been an improved direct cash hog trade.  Midday cash market was higher in morning trade, gaining 3.86 to 108.49 and a 5-day average at 105.18. CME Lean Hog Index was 0.17 lower at 99.90 on the day.  With the firm cash tone, the index should start turning higher to reflect the trend.   The hog market is seeing some buying strength, being supported by a firmer retail market this week and and improving direct cash tone. Price strength was reflected across the entire hog complex today, and the market is looking like it has turned the corner higher.

DAIRY HIGHLIGHTS: The U.S. spot cheese block/barrel average price closed Wednesday up at $2.4125/lb, which is a new high for the year. This is up 56.75c so far this year as demand continues to soar. Cheese reports across the country lean bullish with supply unable to meet the pace of demand. This week’s northeast cheese report cited that demand for barrels is currently outpacing supply. Additionally, the European cheese report said demand is still ahead of supply for European style cheese and that cheese inventories remain tight. The US rally of cheese now to over $2.40/lb is keeping class III futures propped up and has put the short term trend now back to up. Front month class III closed today at $24.98, while June 2022 closed at $24.57. The market is once again within striking distance of $25.00 per cwt.