One of the bright spots in the cattle market has been the demand for beef in the export market to China. The U.S. export data tracks were delayed, the March numbers were released, and U.S. beef exports to China continue to show strong year-over-year growth. In March, nearly 55 million pounds of beef were shipped. This total was well over last year’s March total and 5-year averages. Beef export sales to China have stayed very supportive of the market, but shipments may slow down to concerns over COVID lockdowns in that country. The growth in the Chinese beef export market has been staggering over the past couple years. Total beef exports to China have grown explosively, as China has gone from a minimal purchaser of U.S. beef, to quickly becoming the third-largest market for U.S. beef.  The U.S. total sales are now even larger than Mexico and Canada as a beef export market. The strong sales pace is predicted to continue as the Chinese consumers develop a taste for quality U.S. beef. 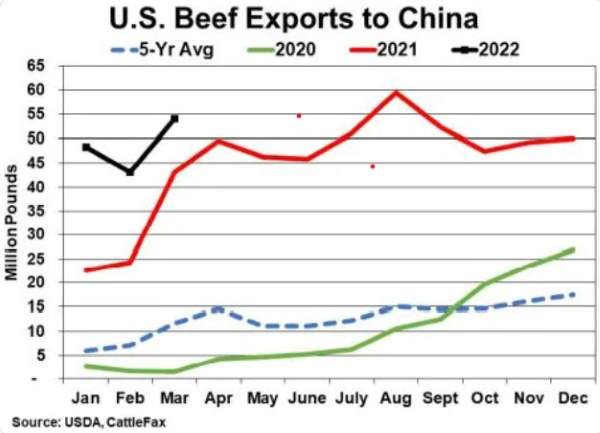 CORN HIGHLIGHTS: Jul corn had an exciting close slightly higher after being down as much as 16 cents at one point. The initial sell-off came today after Reuters reported that Brazil and China are close to a deal that would allow Brazil to export corn to China. Jul corn gained 1/2 cent, closing at 7.72-1/4, and Dec lost 2 cents at 7.23-1/4.

The China and Brazil news dominated the trade today, but with the two country’s solid relationship over soybeans, it is surprising that this did not come sooner, or that this is a shock to the market. The USDA estimates that China will have 8.0 bb of surplus corn in 22/23, yet Sep corn on the Dalian exchange is trading at the equivalent of $11.19 a bushel which makes one wonder how accurate that number will turn out to be. Following that news, corn on Brazil’s futures exchange was up 2.4% yesterday, while Jul corn in the U.S. fell 13-3/4 cents. Crop conditions in central Brazil are still chronically dry, harming their second crop corn. In the U.S., demand for corn is very high with DTN’s National Corn Index just 1 cent below Jul futures, the best basis in ten years. Active demand for ethanol has helped support futures, especially as gasoline supplies tighten. So far for 21/22, ethanol production has been running 9% above last year, and the trend will likely continue in today’s report from the Energy Department.

SOYBEAN HIGHLIGHTS: Soybean futures closed lower along with the rest of the grain complex today following the China-Brazil news. Both soybean meal and oil fell as well, despite crush premiums remaining strong. Jul soybeans lost 12 cents, closing at 16.81, and Nov lost 4-3/4 cents at 15.12-3/4.

Following all the recent bearish outside influences, soybeans have remained strong overall, still not far from the highs of this year. Jul is currently priced about 60 cents above the Aug contract, an expensive price being paid to have soybeans in Jul rather than wait, indicating strong high demand, limited nearby supplies, or both. Crude traded higher today, and diesel prices are near their all-time highs, showing that the demand for soybean oil is not likely to drop off anytime soon. China’s demand for U.S. soybeans continues to show bullish potential after South America’s crops have been hurt by the drought this year. Jul beans on the Dalian exchange closed higher at the equivalent of $21.98 a bushel. DTN’s National Soybean Index closed at 16.62, with an average basis of near 20 cents under the Jul contract.

Wheat, despite closing lower, managed to rally significantly off session lows. Jul Chi had 44 cent trading range between 11.14-1/2 and 11.58-1/2. With wheat being sharply lower for most of the day, it was encouraging to see it climb its way back up. MPLS spring wheat actually did manage to post small gains of about three to five cents with Jul closing at 12.80-1/2 and Dec at 12.77-3/4. Paris milling futures told a similar story to U.S. contracts. They gapped lower and still posted losses of around 6 euros per metric ton but closed significantly off of session lows. As for why wheat was sharply lower this morning? It seems to be in part tied to news that Russia said they would allow some exports of food out of Ukraine for humanitarian reasons. It was later clarified, however, that Russia would only agree to this if sanctions against them were reduced. It was also reported that the deputy defense minister in Russia said the Mariupol port was open; shipments are unlikely, however, due to the destruction of elevators, grain facilities, and infrastructure there. All in all, the global wheat supply remains tight and fundamentally there does not appear to be much bearish news.

CATTLE HIGHLIGHTS: Live cattle futures finished mostly lower as prices reversed over during the course of the day, as the softer cash tone on the week brought some selling pressure. Feeders were mixed as well pressured by firming grain prices and weaker tone in the live cattle market. May feeder cattle expire on 5/26. Jun cattle finished 0.425 to 132.300 and Aug live cattle were 0.225 lower to 132.525. In feeders, Aug feeders lost 0.200 to 167.950.

Jun cattle futures saw difficult price action on Wednesday as prices dropped off early-session highs. Jun prices failed to hold above the 20-day moving average and finished in support of the 10-day moving average. Jun future posted a bearish reversal on the session, which could open the door for additional technical selling pressure on Thursday morning. Cash trade started to develop late on Tuesday with light southern trade starting at $137, down $1 from last week’s totals. Trade on Wednesday stayed light was additional business at Tuesday’s $137 level. Northern trade was very scattered with light business developing at $224, with bids at $224-227. More light trade will build through the week, but the softer tone pressured the Jun contract on Wednesday. Retail beef prices had a mixed close on Tuesday, and at midday, prices held a mixed tone with Choice losing 0.35 to 263.30 and Select was 0.29 higher to 245.14. Load count was light at 54 midday loads. Wednesday’s estimated cattle slaughter is 125,000 head, equal with last week and 4,000 head greater than last year. Weekly slaughter stands at 375,000 head vs 374,000 head last week and 360,000 head last year. Feeders saw mixed trade, looking for direction, supported by weakness in the corn and wheat markets, but pressured by the softer tone in the live cattle market. The May feeder contract expires tomorrow, 5/26, and the premium of front month contracts to the Feeder Cash Index was a limiting factor. The Feeder Cash Index was 0.18 higher to 153.35. The past couple sessions have been encouraging, but the cattle market is not out of the woods and the price action today was a product of that concern. The front-end supply picture and concerns regarding demand and the outside markets can limit the move higher in cattle.

LEAN HOG HIGHLIGHTS: Hog futures saw additional selling pressure as futures prices failed to push through resistance, and traded lower on the day, except for the front month Jun contract. June hogs finished 0.025 higher to 109.050, but Aug hogs dropped 1.100 to 107.950.

The front-month hogs, Jun, Jul, and Aug contracts, failed to push through the 100-day moving average over top the market. This was the third test of this barrier in the past three sessions, and prices faded off that resistance and closed at the bottom of Wednesday’s trading range. The weak price action could lead to additional technical selling to start the day on Thursday. The midday cash market stayed firm, supporting the Jun contract. Midday direct trade was 0.57 higher with the weighted average at 111.96 on Wednesday, and the 5-day average moved higher to 111.48. The CME Lean Hog Index started to reflect the higher cash trend gaining 0.95 to 103.03. Estimated hog slaughter is running under last week’s numbers helping support the cash markets. On Wednesday, slaughter is estimated at 466,000 head, down 13,000 from last week, and 21,000 head from the year-ago level. The market is closely watching the trend in hog slaughter numbers. Retail values trended softer at midday with carcass values 1.06 lower to 107.18. Movement was good at 141 loads. The CME Pork Cutout Index added 1.55 to 105.97 reflecting the recent strength. The rally has stalled out at a key level of resistance and may be susceptible for some pull back to test support. The slaughter pace and cash market will likely be the leading indicators in one direction or another.

DAIRY HIGHLIGHTS: The US dairy spot trade has been mixed the past few sessions. To start, since making a new high for the year on May 18, the US spot cheese market has closed lower in four out of the past five sessions. Both blocks and barrels closed at $2.30/lb on Wednesday on 1 load traded each. This takes blocks down 8c off of their recent high, while barrels are down 15c. On the other hand, spot butter has closed higher eight sessions in a row whole spot powder has closed higher five sessions in a row. Demand is very steady for the Class IV trade, and futures are responding. Second month Class IV milk added 11c to $25.47 while the July contract added 26c to $25.75. This puts July Class IV into a new contract high and is also a new all-time high for the Class IV trade.