The soybean oil market has maintained its value, and today, the most active front-month futures contract has traded through the $70.00 barrier for the fourth time in history. This first occurred in March 2008, but the $70 mark has been eclipsed in the last 3 months (April, May, and now June). The market has been fueled by ongoing supply worries, which have propelled the price of soybean oil. At today’s price, July soybean oil is trading 150% higher than this date last year. Prices are consolidating near the $70 mark and may be building a base for an additional push higher. This possible next move higher will be influenced by the overall supply of soybeans, weather impacting the new crop soybeans, or price moves in competing products such as palm oil or canola oil. 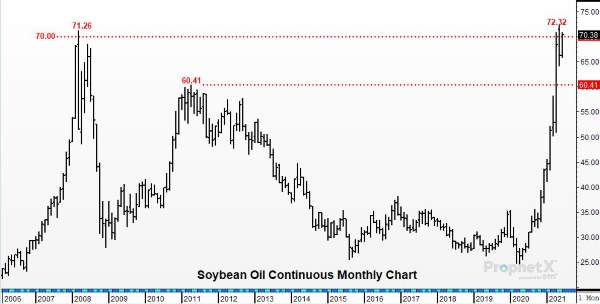 CORN HIGHLIGHTS: Corn futures ended the session losing 13-3/4 cents in Jul to 4-14 which closed at 6.75 and 4-1/4 cents lower in Dec ending the week at 5.72-3/4. Hot and dry for the northern tier of states gave prices a boost yesterday while the latest 6 to 10-day forecast improves rain chances for those same areas. Bear spreading was a noted feature with some noted lower basis levels.  Most of the Midwest should see normal to above-normal rainfall except for the southwestern regions which will see below-normal precipitation. The temperature forecast on the latest 6 to 10-day also has the entire central United States above normal. This is both welcomed where heat units are needed and not welcomed where drier conditions exist. We might argue that the forecast has something for both bullish and bearish traders. Pressure on prices today may have come from yesterday’s Crop Progress report, normally released on Monday but this week released on Tuesday due to Memorial Day. The report indicated 95% of the crop planted versus the 5-year average of 87%. The emerged crop is ahead of schedule at 81% versus 70% and the crop ratings higher than anticipated at 76% good to excellent versus the average pre-release estimate of 70% and last year’s 74%. A technical formation called head and shoulders is forming on corn charts. Should this formation fulfill its downside objective, a target of near 4.50 Dec is expected. It is early in the season, yet we do not want to ignore what might be termed handwriting on the wall.

SOYBEAN HIGHLIGHTS: Soybean futures, unlike corn, finished with solid gains of 14 to 18 cents as Sep lead today’s gains closing at 14.47-1/4. Jul gained 14 closing at 15.62-1/2 and Nov up 16-3/4 cents to end the session at 14.13-3/4.  A sharp spike in soybean oil prices with gains of nearly 300 points and new contract higher were responsible for the gains in soybeans. Traders were buying oil and selling meal which lost 3.00 to nearly 5.00 per ton. Soy oil stocks remain tight as crushers have reduced the over crush due to high prices, low availability, or both. This is creating tighter oil stocks and with palm oil prices firmer this year and now higher energy prices the market has pushed prices higher. Some concern over freeze conditions this last weekend is adding support, yet it is early enough that re-plant will likely occur. Still, it is a less than ideal situation and is a must-have crop where this and next year’s projected carry-out are what we would term paper-thin.

WHEAT HIGHLIGHTS:  Jul Chi down 6 cents at 6.87-1/2 & Dec down 3-1/4 cents at 7.00. Jul KC wheat down 3-3/4 cents at 6.33-3/4 & Dec down 2-3/4 cents at 6.53-1/2. Wheat down slightly today after yesterday’s surge in prices, based on weather. Today there is more promise in the extended forecast to see some rain but still nothing for the next 6 days. Weather will turn unseasonably hot and dry the remainder of this week and into the weekend. As it’s been stated, the extended forecast for the Plains has no rain on the horizon, and the Dakotas are expected to see triple-digit numbers regarding temps. Yesterday’s Crop Progress report has winter wheat headed at 79% – right on pace with the 5-year average. Winter wheat condition reported at 48% – up 1% from last week. Spring wheat planting is 97% and condition at 43% – down 2% from last week. Current conditions have not been seen since 1988, this time last year spring wheat was rated 80% good/excellent. Globally, crops are still doing relatively well in the EU & Ukraine. Southern Russia is receiving plentiful rains which may actually become of concern if they don’t let up soon.