The impact of the tighter global soybean supply and poor Brazilian crops is starting to show in export shipments.  For the month of April, U.S. soybean exports totaled 3.66 mmt, which smashed the previous record for the month by 50%. China stays active in this market with 37% of those exported soybeans heading there as the export destination. This pace well exceeds typical export pace, as China usually is puling in Brazilian soybeans in this window.  On top of the strong shipping pace has been the average U.S. export price for those soybeans averaged $17.84/bu, an all-time high for any month. This strong export pace has led to and will likely set up further reduction in old crop soybean carry out going forward into the summer, reflecting a tightening global soybean picture. 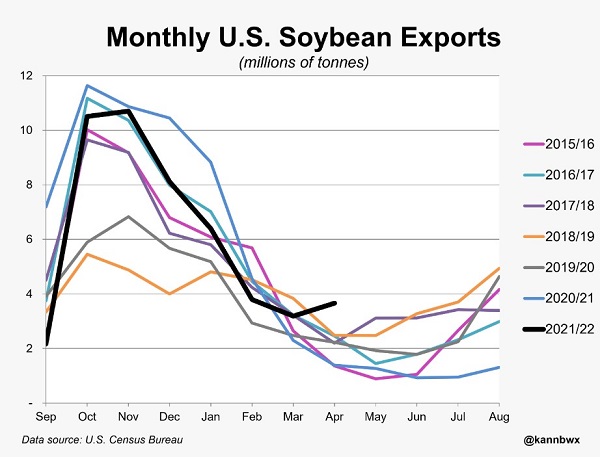 CORN HIGHLIGHTS: Corn futures traded 3 to 4 cents lower on the over-night trade, reflecting both crop ratings and progress slightly above expectations. However, selling interest seemed minimal with prices turning positive by the pause session and continuing upward throughout the session. July corn gained 14-1/s cents to close at 7.57 and December added 11-1/2 to close at 7.14, picking up 32 cents from it’s recent low. Higher energy and soybeans, along with a growing lack of confidence that issues will be resolved anytime soon in Ukraine, were supportive factors today.

Crop progress indicated 94% of the crop is planted verses a 5-year average of 92%. Bear in mind, the 5-year average also includes the latest crop ever in 2019. Still, farmers have made big progress. Notable was North Dakota at 81% and Ohio at 85%. Minnesota is 93%, yet most of the ground that is/was wet is in the area where a May 25 prevent plant date exits. Crop ratings indicated 73% is rated good to excellent, 2 points higher than the pre-report estimate. We would not put much stock in ratings at this time of year, nor would we over-focus on near term weather. Support today may have come from some looking for a drier forecast, yet it is likely many farmers would suggest a touch of dry helps to develop roots. The next level of resistance for December is near 7.23, the 50-day moving average.

SOYBEAN HIGHLIGHTS: Soybean futures had a strong day with the July contract closing just 21 cents below the contract high. Gains in crude oil again supported front month soybean oil, while soybean meal had an impressive jump of 10.3 to 417.4 in July. Jul soybeans gained 29 cents, closing at 17.28-1/4, and Nov gained 16-1/4 cents at 15.49-3/4.

Yesterday, the USDA reported that 78% of the soybean crop has been planted, with 56% emerged, which is close to the 5-year average for both, but North Dakota is still well behind at only 41% planted. Today’s pop in futures is likely due to fund buying or purchases from China, with reports that the US exported 3.66 million tons of soybeans in April, beating the month’s record by 50%. 37% of those beans were headed for China, which is well above normal, with an average US export price of 17.84 a bushel, an all-time high for any month. That average US export price compares to July soybeans on the Dalian exchange, closing at the equivalent of $22.45 a bushel. China is also lifting Covid restrictions in major cities, which will increase demand in the coming weeks and likely has been a bullish factor in the higher futures seen today. July heating oil closed at a new high of 4.3601 yesterday, which is a bullish sign that more soybean oil will be needed to extend diesel supplies.

The big news this week is that Russia and Turkey are scheduled to meet tomorrow in order to discuss export corridors being opened in Ukraine. The talks are not predicted to make much progress, however, as Russia’s attacks have not subsided. The deputy ag minister for Ukraine has said that their maximum export capacity is around 2 mmt per month – prior to the war it was closer to 5 mmt. Therefore, even if they could ship grain, it would not necessarily be at the pace needed to satisfy the market. Here in the US, winter wheat crop ratings came in 1% higher than last week at 30% good to excellent. The USDA also said 5% of the crop is harvested, compared to 6% average. Spring wheat planting has picked up, at 82% complete, but still behind the average of 97% for this time of the year. Most of the delays appear to be coming from North Dakota and Minnesota, with an estimated two million acres left to be planted there. Those two states in particular have been plagued by wet weather, which caused significant delays. Given the attractive prices wheat is at, however, farmers may still attempt to plant as many acres as possible. It is also noted that the Biden administration may announce a lowering of tariffs against China as soon as this week. Just how much this impacts the wheat market (if at all) remains to be seen, but it is worth being aware of. As a reminder, the next WASDE report will be released this Friday at 11 AM central.

CATTLE HIGHLIGHTS:  Live cattle closed higher with higher corn, and feeder cattle had a strong finish with front months leading the way despite higher grain. Cash trade has not been established yet, but asking prices have started around 137 to 138 in the South. June cattle finished 0.900 higher to 133.725, and Dec live cattle were 0.975 higher to 146.375. In feeders, Aug gained 0.475 to 172.450.

Another day of higher corn supported the live cattle futures, while feeders traded higher as well. Estimates for this week’s cash trade were initially steady to lower, but an impressive jump in boxed beef may breathe some life into the cash market with asking prices 2-3 dollars higher than last week. Choice was up 2.32 at 269.58 and select up 1.07 to 251.09. Given the big slaughter levels and front-end currentness, steady cash should be the worst-case scenario this week. Packers have been contracted ahead over the past few weeks, but holding back in hopes of lower prices has brought them more current and should cause them to be more aggressive as they need to replenish their inventories. The uptrend in boxed beef lately points to strong demand despite inflationary pressure on consumers. It is also possible that with China easing Covid restrictions in major cities, demand has picked up there, which eventually will be revealed in the export sales report next week.

LEAN HOG HIGHLIGHTS: Hog futures saw mixed trade on Tuesday, with the premium of the June market to the cash being a limiting factor, but the overall cash market tone helped support the front of the market. June hogs lost 0.800, closing at 108.425 and July was .300 higher at 109.275.

July hogs are trading into a sideways trading range, watching the direction of June futures, as its expiration is just around the corner.  July hogs are holding support at the 20-day moving average the past two sessions, but held in check by the 100-day moving average over top.  July has traded in this range for the past nine sessions.  Cash market was strong with direct trade up 4.76 on the morning report to 116.34.  The Lean Hog Index has reflected the strong cash tone, gaining 1.29 to 107.34, closing the gap between the index and the June futures.  The focus will stay on the retail market, and pork carcasses were softer at midday, after a disappointing close on Monday.  Midday values slipped .58 to 108.21, but load movement was good at 181 loads.  Hog slaughter pace remains strong, and weight are steady, which still bring ample supplies into the cooler.  The demand tone in product movement has picked up recently, keeping the market supported.  Hog futures are in consolidation mode, watching the trend in the cash market.  Deferred contract still looks supportive as the longer-term view of the market will reflect a tighter supply picture.

DAIRY HIGHLIGHTS: The highlight of the day in the dairy trade was the fact that the Global Dairy Trade price index was bid higher for the first time since March 1. This snaps a streak of five down auctions in a row in which the index fell about 16% from its March 1 high. Buyers supported the GDT butter (+5.60%) and GDT skim milk powder (+3.00%) markets higher today primarily. GDT cheddar (-3.60%) and GDT whole milk powder (-0.30%) were the two big decliners in the session. The fact that the down streak was snapped in the GDT may have brought optimism back into the US market. Both class III and IV futures were bid slightly higher for the day. Second month class III added 9c to $25.16 while second month class IV added 12c to $26.27. The $26.27 close for class IV is a new all-time high.