Seasonality may be in play in the cattle markets as prices have rebounded off the most recent lows.  August live cattle broke out to the upside on Wednesday, as the cash market ticked higher this week, and strong money flow supported the market.  Recently, cattle futures have been under strong selling pressure, but the market has been making its move higher in a historically strong seasonal window.  Typically, from early until late July or early August, the cattle market has a tendency to trade higher, working off a spring low.  The most recent move in the cattle market looks to be following that same historical pattern.  Typically, this window is when cattle carcass weights trend lower, tightening the supply of higher quality beef to the retail market.  This pattern is holding again this year, despite a heavy supply of cattle available still.  The live cattle market has made a very good move higher over the paste week, as August live cattle are $7.50 off the recent low.  The extent of the rally will likely be driven by the cash market, and the money flow.  After Wednesday, the market looks poised to add more value in the near-term. 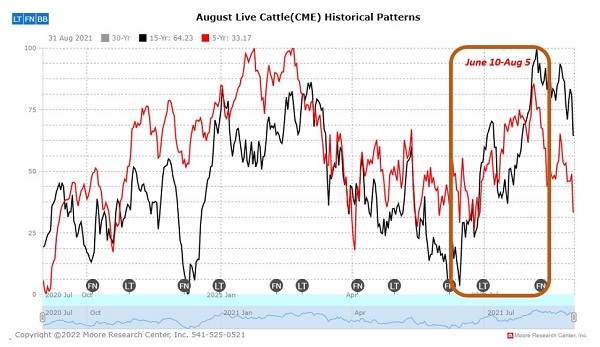 CORN HIGHLIGHTS: Corn futures ended firmer for the third consecutive session, as the trade is potentially putting some weather premium into price with both the European and American weather models suggesting warmer and drier with a ridge of pressure from the West gradually moving eastward. Soybeans added support as they trended higher and into new contract highs. Energy prices also firmed and they too scored new contract highs. A less than friendly ethanol report kept prices in check, as did the 50-day moving average. Though another positive gain was recorded, both July and December futures finished 10 to 7 cents from the daily high.

Daily ethanol production has fallen this past week, which is the first decline since early April, to a rate of 1.039 million barrels per day from 1.071 million barrels per day last week. We don’t want to read too much into one week’s report, but if a trend develops, that might be concerning. With crude prices reaching another new set of high contract prices for futures today, demand for ethanol should hold. Bull spreading (front months rallying more than back months) is usually a sign of slow farmer selling, increasing demand, or both. Bull spreading in the corn market occurred today for the third consecutive session, likely indicating end users are buying and farmer selling is light. Prices are at a pivotal level. Forecasts in the European and American model are both suggesting warmer and drier. The market is likely taking notice, yet we would caution against getting too bulled up on extended weather forecasts the first half of June. Nonetheless, bulls are potentially finding something to hang their hat on.

SOYBEAN HIGHLIGHTS: Soybean futures closed higher with July making a new contract high this morning, yet prices slipped into the close with July losing 18 cents from its peak. Crude made new highs as well and pulled soybean oil up along with it. July soybean oil gained 1.50, closing at 82.94. Jul soybeans gained 11-3/4 cents, closing at 17.40, and Nov gained 18-1/4 cents at 15.68.

Today’s move higher was driven by higher crude, good crush incentives, and anticipation of Friday’s USDA report that could reveal tighter supplies of soybeans than previously thought. The trend lately has been higher crude that supports soybean oil and soybeans. With more renewable diesel plants coming online, record amounts of soybean oil are needed to extend diesel supplies in the US. Crush margins have narrowed the past month thanks to tight supplies of old crop, but the USDA has reported that one bushel of 17.57 soybeans in Illinois can produce 20.10 worth of soybean meal and oil, a strong incentive to continue to crush. Friday’s WASDE report will be interesting as the market has been struggling with extremely tight bean supplies, and by the end of August there may be a soybean surplus of less than 200 million bushels, which would be the lowest in six or seven years. On June 30, the Acreage report and Grain Stocks report will be released and record soybean acres are expected. As far as weather, DTN’s summer forecast is expecting mostly above normal temperatures and below normal rain for central US. The strength in soybeans is in the fundamentals or tight supply and strong demand and now weather premium.

The big news today was the meeting between Turkey and Russia to discuss the possibility of opening export corridors in Ukraine. There is roughly 22 mmt of grain waiting to be shipped out of the country currently. Reportedly, representatives from both Russia and Turkey are open to the idea of exports, but Ukraine remains leery. It does not appear that a concrete resolution was met. Keep in mind that a few months ago, Putin also said he was not going to invade Ukraine at all, and look where the situation is at now. Wheat trade has been volatile recently and while fundamentals still look bullish, the perception that Ukraine may be able export (even on a small scale) is a bearish factor. Today, traders may have also been positioning ahead of Friday’s Supply and Demand report. While major changes are not expected, there is always room for surprises. There is still concern about lower wheat crops in Canada, the US, and Europe and many end buyers in North Africa and the Middle East are still short. It remains to be seen if the USDA will address any of this on the report.

CATTLE HIGHLIGHTS: Both live and feeder cattle contracts had an impressive day higher with August leading the way in live cattle. Higher cash provided today’s support with light trade in the South at 136, a dollar better than last week. June cattle finished 3.100 higher to 136.825, and Dec live cattle were 2.100 higher to 148.475. In feeders, Aug gained 3.400 to 175.650.

Cash was king today as the packers aggressively look to replenish their inventories. Trade was reported at 136 in Texas and 141 in Nebraska, while Northern dressed came in 3 dollars higher than last week at 225. Asking prices remain firm in the South between 137 and 138, fueling futures as the previous guesses for this week were steady to lower cash. Boxed beef remains on its upward trajectory as choice was up 0.97 at 272.39 and select up 0.45 at 250.01. The packer has been paying up to find choice beef with falling weights, making choice hard to come by and the choice/select spread now at 21 dollars. Both June and August closed above their 100-day moving averages for the first time since late April, and June is a day or two away from filling the chart gap at 138.350 if this current movement continues. August feeder cattle came just a few ticks away from breaking above the 100-day moving average, but their strength, despite higher corn, points to tight calf supplies and strong underlying fundamentals.

July hogs saw a strong price break early in the session as a weaker retail tone brought some follow through selling to start the session, but the sellers dried up at the $105 level, and prices rallied back above support at the 20-day moving average. July has traded in this range of $105-$113 for the past ten sessions.  Retail markets have been soft the past couple sessions, and that helped trigger the weaker tone.  At Midday on Wednesday, pork carcasses were .50 firmer to 108.33.  Load count was moderate at 147 loads.  Cash market has been strong, but the morning direct trade was softer on Wednesday, losing 2.22 on the morning report to 114.12  The Lean Hog Index has reflected the overall strong cash tone, gaining .46 to 107.80, closing the gap between the index and the June futures.  Hog slaughter pace remains strong with estimated slaughter at 477,000 head on Wednesday, steady with last week, down 7,000 from last year.  Weights are still heavy compared to last year, keeping plenty of product available to the market.  The hog market rally has hit a pause, and now correcting to support.  The fundamentals will be the key for further price support or failure in the near term.

DAIRY HIGHLIGHTS: Butter demand on the US spot trade has been very strong for a number of weeks now. The demand has outweighed supply and has taken the market up from a May low of $2.61/lb up to today’s close of $3.00/lb in less than a month. $3.00/lb is historically a level that the butter market can’t sustain; however, some caution could be needed here at these elevated prices. Spot butter peaked at $3.06/lb back in the 2014 bull market before crashing down to $1.77/lb about a month later. During the late 2015 butter spike when McDonald’s announced it was switching over from using margarine to using butter, the US butter price spiked up to a record $3.1350/lb. After hitting that peak, butter was down to $2.35/lb a couple weeks later. These years show that $3.00 is historically a level that sellers get aggressive at.