New crop soybean export sales continue to out-perform at a historical pace. As of June 2, U.S. exporters had sold a record 12.7 mmt of soybeans for shipment in the 2022-23 marketing year. At nearly 467 million bushels, the sale pace is a record, and that total covers 21% of the USDA’s projection for soybean exports forecast for the next marketing year. China is the largest buyer, as their purchases make up 60% of those sales, and unknown destinations add another 26%. Combining the new crop numbers and the strong than usual demand for the current old crop supply, soybean prices are well supported by the demand side of the market. As U.S. producer is finishing up the planting on the 2022-23 crop this spring, the soybean market will stay extremely volatile and will likely react aggressively to any news that could tighten an already tight overall soybean supply picture. 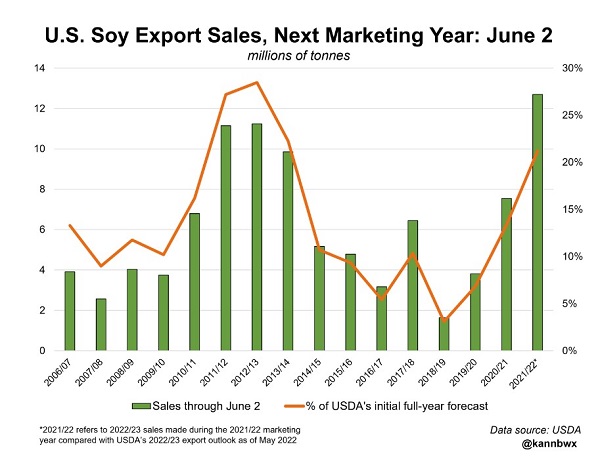 CORN HIGHLIGHTS: Corn futures firmed again as ethanol plants and others are finding it difficult to source corn. Stronger basis is noted as well. Crude oil topping at 122/barrel was noted today, also supportive. July corn ended the session at 7.73, up 8-1/2 cents, while new crop December gave up 1-0 to close at 7-16.3/4. Both contracts finished well off the daily high price of 7.82-3/6 in July and 7.25-1/2 in December. It is likely that some position squaring in front of tomorrow’s WASDE report occurred late in the session.

Tomorrow’s USDA report is not expected to garner much attention as the focus will immediately turn to weather and production. Expectations are for little change to the core numbers from the May report, at least for U.S. production and usage. World numbers could see adjustments that may have impact as the USDA will continually need to assess the war in Ukraine as well as production elsewhere. The pre-report estimate for carryout for the 2021/2022 crop is 1.438 bb. The May estimate was 1.440 bb. For the year ahead, little change from this year and last month is expected with the pre-report figure at 1.337 bb, compared to 1.360 last month. Export sales at 11 mb old crop and 2.9 for the season ahead were again a disappointment. Year-to-date total sales are 2.343 bb or 93.72% of expected sales of 2.5 bb. Weather forecasters still appear to be aligned with warmer and drier, yet the intensity of the ridge forming and staying in one place for a prolonged period is in question today. Bottom line, in tight supply markets traders will pay attention to forecasts and likely change directional biases for price quickly.

Good export sales numbers were the driving factor for soybeans today, coming in at 15.8 mb for 21/22, up noticeably from the prior week and up 41% from the prior 4-week average. Net sales of 21.9 mb were recorded for 22/23, but last week’s export shipments of 17.5 mb were below the 20.8 mb needed each week to achieve the USDA’s export estimate of 2.140 bb for 21/22. Today, private exporters reported sales of 143,000 mt of soybeans for delivery to unknown destinations, with 500 mt for delivery during 21/22, and 142,500 mt for 22/23. Following this news, July soybeans traded new contract highs and came within 31 cents of the all-time record high of 17.89 for a front month contract. Crude oil fell today, which weighed on soybean oil futures, but overall, the fundamentals of the soy complex remain bullish. The July August soybean spread has widened to nearly 90 cents, showing the increasingly tight supply. Tomorrow’s USDA report is expected to show carry out at a snug 217 mb for the 21/22 season. If confirmed, this leaves little room for error on this year’s production.

Though it was not able to move into positive territory by the close, wheat did manage to settle well off of session lows – an encouraging sign. Tomorrow’s WASDE report has the potential to be a market mover, though major changes are not anticipated for wheat. Pre-report estimates peg all wheat production at 1,726 mb vs 1,729 mb in May. US carryout for 21/22 is estimated at 661 mb vs 655 in May, while 22/23 estimates are at 622 mb vs 619 last month. A lot will be determined by the outcome of the report, as it relates to the Ukraine war and how the global supply situation is addressed. The circumstances are constantly changing, and though it is unlikely, there is still a chance that export corridors will be opened up in Ukraine. New reports suggest that the UK is discussing providing Ukraine with weapons as well, which could further alter the course of the war. Globally, there are concerns about lower Canadian, US, and European wheat crops as well, but just how the USDA will address this remains to be seen. Today, the market also received the weekly export sales data, in which the USDA reported an increase of 16.6 mb of wheat export sales. For 21/22 the USDA was estimating exports at 805 mb, but the ending total of 786.7 mb fell shy.

CATTLE HIGHLIGHTS: Both live and feeder cattle closed modestly higher in the front months, while deferred contracts slipped a bit. Producers are holding firm with higher asking prices in both the North and South, putting pressure on the packer to pay up. June cattle finished 0.225 higher to 137.050, and Dec live cattle were 0.275 lower to 148.200. In feeders, Aug gained 0.375 to 176.025.

Front month live cattle held onto gains from yesterday thanks to a strong cash market with scattered bids of 136 in the South, a dollar higher than last week, but producers holding asking prices firm between 138 and 140. In the North, trade has been marked at 225 to 226, 3 to 4 dollars higher than last week, but producers holding asking prices at 228. A basis flip seems possible as shorts get squeezed and the packer is put under more pressure to pay up for cattle, choice in particular. June live cattle closed solidly above the 100-day moving average again, looking to close the gap at 138.350. It remains to be seen if that gap will act as resistance, or if it screams higher along with higher cash. Slaughter pace has been brisk, and the number of cattle packers had purchased ahead in May dwindled rapidly. Export sales were okay at 17,700 mt, down 1% from the previous week and down 21% from the prior 4-week average. The top 3 buyers were Japan at 5,600 mt, China at 5,200 mt, and South Korea at 3,600 mt. Boxed beef was mixed with choice down 55 cents at 271.19 and select up 36 cents at 249.77.

July hogs saw a strong price break as sellers pushed the market lower to retest the $105 level from Wednesday, and support at the 200-day moving average. July hogs closed at their lowest point since May 16th.  A break below the 200-day moving average would have the market looking to retest the May lows at 97.350 on July Futures.  Retail markets have been soft the past couple sessions and the weak afternoon close on Wednesday helped trigger the weaker tone.  At midday on Thursday, pork carcasses recovered, gaining 4.43 to 108.90.  Load count was light at 127 loads.  The afternoon carcass close will be key for the price action on Friday.  Weekly export sales were announced by the USDA this morning, and new net sales of 16,700 MT for 2022 were down 48% from the previous week and 44% from the prior 4-week average.  Japan, Mexico, and South Korea were the top buyers of U.S. pork last week.  Cash market has been strong, but the morning direct trade recovered from some weakness on Wednesday, gaining 3.82 to 117.94. The Lean Hog Index lost .32 to 107.48.  The Index is now trading at a discount to the front-end futures, which could limit additional selling pressure.  The hog market is having a difficult week on long liquidation as the retail market and hog slaughter numbers have pressure the market.  Futures are testing support and may be at a point where the sellers may start to slow, especially given the cash market strength.

DAIRY HIGHLIGHTS: Fundamental news and market action was muffled after a busy first few days of the week with the second month Class III contract falling six cents and its Class IV counterpart unchanged. So far the July Class III contract has ran into resistance at the $25.00 point with today’s close 84 cents beneath the all-time high for the second month from a couple months back. July Class IV futures exploded 54 cents higher a week ago and have been level to slightly higher in the trading days since.