On Friday’s USDA WASDE report, the USDA lower corn export demand, and the pace of monthly exports may have helped tip this move.  The April export total for corn were nearly 7 MMT.  This total was nearly 8% above the average for the month of April, but down significantly from last year’s record levels. The average price for the month was $8.31/bu or $327/MT, which ranked as the third highest price for U.S. corn of any month on record.  The Chinese demand for corn was strong, with 245 of those April shipments heading to China’s ports.  The market has been concerned about demand slowing with the high prices for U.S. corn, while shipments have been very good historically, they are also showing some signs of slowing. 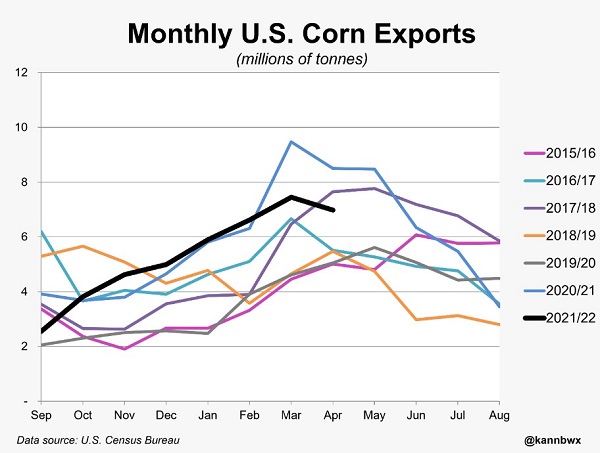 CORN HIGHLIGHTS: Corn futures finished positive, but mostly uneventful for a report day. Nearby July gained 0-1/4 cent to close at 7.73-1/4 and December added 3-3/4 to close at 7.20-1/2. The WASDE report was perhaps slightly negative with small adjustments to carryout. Crude oil was slightly softer. It looks like traders may have been moving aside long beans and buying corn. Soybeans lost 14 to 23-1/2 cents. For the week, July corn gained 46-1/4 cents and December added 30-1/2.

It looks like the USDA pretty much punted on this report, with little changes noted. Projected carryout for the 2021/2022 crop year came in at 1.485 bb, about the average estimate of 1.438 and last month’s 1.440. For the upcoming crop season, expected carryout is now 1.4 bb, as compared to the pre-report estimate of 1.337 bb and last month’s 1.360. While today’s number is slightly more than expected, there just wasn’t much new data from May to work into spread sheets. Perhaps supportive was that there were no bearish surprises of consequence. Focus will now turn to weather with calls for a near-term warm up and dry down on tap according to the most recent National Weather Service 6-to-10-day outlook, which has the entire Midwest above normal for temperatures and below normal for rain. Some are suggesting this is the beginning of a ridge of high pressure that could push eastward. That may be the case, yet from our view, it is too early to rely on longer term forecasts.

Today’s WASDE report held few surprises for soybeans with new crop production unchanged at 4.640 bb, based on a record high 91 million planted acres and projected average yield of 51.5 bpa. Old crop ending stocks were adjusted to be 30 mb lower based off a 30 mb increase in soybean exports for 21/22, and new crop ending stocks were lowered by 30 mb to 280 mb, which was the biggest change that the USDA made. The USDA increased Brazil’s 21/22 production to 126 mmt, up 1 mmt from the May report, and an opposite move of what trade was expecting. The agency also increased production for Argentina’s crop above pre-report expectations to 43.3 mmt, up from 42 mmt in May. Global old crop ending stocks were marked at 86.15 mmt, up from 85.2 mmt in May. The increase in South America’s yields were unexpected following drought in the region. This morning’s CPI data weighed heavily on almost all commodities, as well as equity markets, today as inflation becomes an increasingly more dire situation. The spread between July and November soybeans began to narrow today, but July beans are still only 38 cents from their contract high, and with US supplies so tight, the upward trend should continue. Rumors continue to circulate about China purchasing US soybeans as July beans on the Dalian exchange rallied to their highest level since February’s record high. July soybeans have potential to test the all-time high for any contract at 17.89.

Today’s focus was on the monthly USDA Supply & Demand report, which came and went without much commotion. The report was relatively neutral. US all wheat production came in at 1,737 mb vs 1,729 last month and an average guess of 1,726. Carryout for 21/22 was unchanged from May at 655 mb, and for 22/23 came in slightly higher than expected at 626 mb vs 619 a month ago. The USDA also left exports unchanged at 775 mb. World ending stocks were virtually unchanged for both the 21/22 and 22/23 marketing years. Pegged at 266.9 mmt for 22/23, that is a decrease of only 0.1 mmt from the May number. Globally, India’s production fell to 106 mmt from 108.5 mmt a month ago, but this was somewhat offset by increasing Russia’s production by 1 mmt from last month to 81 mmt. Ukraine’s production remained at 21.5 mmt. Other than the report, there was not much in the news today pertaining to the wheat market but the US Dollar is on the rise again and may provide a bearish headwind.

A strong cash market this week helped support live cattle futures, as prices have rallied off recent lows.  Cash trade saw some additional clean up trade on Friday, with $137 catching some business.  This was firmer than early in the week prices, and $1-2 higher than last week.  The firmer tone into the end of the week should help support the market going into next week’s open.  June live cattle closed solidly above the 100-day moving average this week, and August is using the same average as a swing point.  The market looks technically supported above this level.  The strong cash market has been fueled by the drop in carcass weights and packers looking to pay up to find quality.  Carcass weights dropped another 6 pounds last week, maintaining the trend.  This has impacted the dressing quality, and that has been reflected in the choice/select spread, which has widened out to $22.00 at midday, reflecting the change in quality of cattle.  Midday retail values were mixed with choice adding .94 to 272.04, but select was .18 lower to 249.43.  Load count was light at 62 loads.  Consumer inflation data was strong this morning, and the increased inflation picture likely weighed on cattle prices as the tighter consumer budget will likely be a limit factor in beef demand. Feeder cattle were softer today on profit taking after a strong week.  A firm close in grain markets also helped limit buying on Friday.  The cattle market still looks for room to move higher fueled by a strong cash tone.  Technically, charts are supported, and lighter weights will likely keep the packers active in the cash market.

Interesting week in hog market as the futures market is pricing in the potential peak in the cash market.  The Lean Hog Index trended to a premium to the futures market, reflecting the trend in cash.  On Friday, the Cash Index slipped .17, but was still 2.28 higher on the week.  Direct cash hog trade trended higher throughout the week, but Friday morning trade was 2.62 lower to 115.32, but the 5-day average increased to 115.94.  The retail market was firmer at midday, gaining 2.50 for pork carcasses, trading at 111.59.  The load count was moderate at 145 loads. At midday, pork carcasses were trading $3.00 higher than Monday’s close, and over $7.00 higher than Wednesday. The hog market is having a difficult week on long liquidation, even in the face of strong cash markets and overall retail values.  The price action next week will be interesting.  Is the market pricing in a potential turn lower in cash, but at this point, this is still not being indicated.

DAIRY HIGHLIGHTS: Dairy sellers were aggressive in Friday’s spot session across the cheese, butter, and powder markets. Sellers offered barrels 6.25c lower to $2.2425/lb on 9 loads traded. A good amount of inventory has been hitting the market, as the 9 loads traded today follows the 10 loads traded yesterday. The drop in barrel price Friday takes the barrel market down overall for the week by 0.25c. Block cheese fell 2c to $2.2550/lb on 1 load traded on Friday, which puts blocks down 1.50c overall this week. The butter trade couldn’t hold $3.00/lb as sellers moved 5 loads on Friday to push the market to a close of $2.9750/lb. Powder fell 1.50c for the second day in a row, down to $1.8550/lb.