The equity market was the focus of the markets to start the week, as Dow futures pushed to new lows for the year. The selling pressure started last week as core inflation numbers continue to run at the highest levels in 40 years, making the market nervous about how the Fed was going to handle the inflation situation. The Fed is meeting this week, and the expectation is for a 50-basis point rise on interest rates, but with the strong inflation data, the equity markets are anticipating that moving up to 75-basis points. In addition, equity market traders are concerned about the impact the Fed action may have on the overall economy and economic growth here in the U.S. Those concerns spilled over into other markets for the day in a combined risk-off trade day overall. Dow futures traded over 800 points lower during the day and established new lows for the year. At this point, the selling pressure looks to continue, given the weak trade action on Monday. 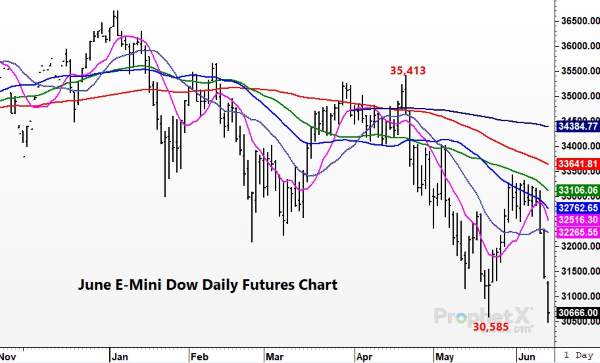 CORN HIGHLIGHTS: Corn futures saw both sides of steady as the market is trying to decide if calls for warmer and drier have much merit when the radar has rain on it. Of course, it is all relative as compared to where the heat and rain (or lack of) develop in the next few days/weeks. A heavy sell-off in the equity markets for the third session in a row weighed on futures, yet by the end of trading, prices clawed back finishing mixed. Jul lost 4 cents to close at 7.69-1/4 and Dec added 1 to end the day at 7.21-1/2. Sharp losses in soybeans of more than 30 cents may have also pressured corn prices.

Export inspections were termed supportive at 47 mb. This brings the year-to-date total to 1.770 bb or 70.8% of expected sales of 2.5 billion. There are just under three months until the end of the marketing year. Keep in mind that inspections lost a month last fall due to Hurricane Ida which hit New Orleans and other southern ports/load-out facilities at the end of August. Rain across the upper Midwest today should allow for crops in these regions to quickly grow, as a major warm-up is on the way with triple-digit temperatures expected. In other parts of the Midwest, high temperatures will dry out recent rains quickly. All attention in the days ahead will be if a ridge of pressure will migrate east and keep warm and dry in place, or if it will move west and allow moisture to move north. Heat units are needed, yet if accompanied by continuous dry, crop ratings will slip in a hurry. Some freeze damage was reported in Brazil’s second corn crop over the weekend, but apparently not enough to worry the market today.

SOYBEAN HIGHLIGHTS: Soybean futures closed lower today after a sharp sell-off in equities that pulled nearly all commodities lower. Both soybean meal and oil were lower today as well. Jul soybeans lost 38 cents, closing at 17.07-1/2, and Nov lost 34-1/2 cents at 15.33-3/4.

Soybeans were the hardest hit out of the grain complex today, as traders still grapple with Friday’s bearish CPI data. Jul soybeans gained 47 cents last week showing their strength in the face of an increasingly tightening supply. Managed money turned out to be sellers last week, reducing their net long position by 6,727 contracts to 83,586 contracts, and they likely continued to sell today as they search for a seasonal top. Last week the USDA raised exports for the 21/22 marketing year which cut the carryout to 205 mb, the smallest it’s been since 2016 with two and half months still left in the marketing year. Crude oil was down early in the day but recovered some of those losses which helped soybean oil recover a bit, but still closed lower. Funds were buyers of bean oil last week and increased their long position by 3,111 contracts to 47,258 contracts. Eventually, these high fuel prices should start to weaken demand, but this has not occurred yet. Soybean prices are sensitive to news from China, and new outbreaks of Covid were reported in both Beijing and Shanghai over the weekend to bring a return of restrictions to those cities, a bearish influence on beans. Despite the lower trade, both Jul and Nov soybeans closed above their 50-day moving averages, but traders are likely to search for a top this month.

After roughly a 40-cent trading range, wheat closed relatively quietly. Without much change on Friday’s USDA report and not much fresh news today, the market just did not have a great reason to move in either direction. It is possible that the lower stock market and recessionary concerns prevented grains from rallying further today though. As of this writing, the Dow is close to 800 points lower. The U.S. dollar also continues to climb, adding to pressure in wheat, as the two generally share an inverse relationship. The wheat market has been in a sideways trading range as of late, as the bulls and the bears seem to be balancing each other out. However, bear spreading was noted today in Chi wheat, with stronger gains in deferred months vs nearby. This likely signals the concern on the minds of traders about wheat supply down the road. Today’s data had wheat inspections listed at 14.3 mb, with total 22/23 inspections now at 23 mb. Yearly exports are estimated at 775 mb, which is down 4% from last year.

CATTLE HIGHLIGHTS: Difficult start to the week in cattle markets, as the weakness seen to end the week last week spilled over to Monday. Strong selling pressure in equity markets and demand concerns due to a tighter consumer dollar brought more selling pressure to cattle markets. Jun live cattle lost 2.200 to 134.000 and Aug cattle dropped 2.325 to 133.872. In feeders, the Aug contract dropped 3.150 to 171.325.

Cattle prices gapped lower on the open, triggering strong selling pressure, as prices quickly moved through downside support levels. Prices did find some buying support off the session lows, but the technical damage was done to the charts and will keep the pressure in the market going into Tuesday. Cash trade was firmer last week, but typical Monday, trade was quiet, waiting for bids and asking prices to develop. The expectation is for a firmer tone following last week’s strength. The retail demand will stay clearly in focus past the Father’s Day holiday. Carcass values were softer to start the week at midday with Choice values down 0.13 to 271.19 and Select was 0.89 lower to 248.000. The load count was light at 39 loads. Carcass weights dropped another 5 pounds last week, maintaining the trend and a larger production compared to last week and last year, as slaughter numbers remain strong despite the lighter weights. The biggest variable has been the drop in quality, reflected in the Choice/Select spread, expanding to $23.19 at midday. Feeder cattle followed live cattle lower on profit-taking and long liquidation. Prices, like live cattle, did find buying support at the lows of the day, but charts are concerning. Tough start to the week, and just look technically challenged. The cash market will still take the spotlight but has yet to develop to start the week.

LEAN HOG HIGHLIGHTS: Hog futures were the only contracts in the livestock complex that were not affected by today’s lower trade. Low slaughter numbers last week indicate that the packer will need to be aggressive in purchases this week which should be supportive. Jun hogs gained 0.200 to 108.000, and Jul hogs gained 1.200 to 106.675.

Hogs opened significantly lower but ended with a positive close, which leads one to believe that the packer was out paying up for hogs today. Last week’s slaughter was only 446k head compared to 478k head the week before. The National Direct Afternoon report showed cash 2.50 lower, and carcasses were 2.48 higher. Trade would suggest that both cash and cutout will increase this week as the packer needs to make up for such low slaughter last week. Jun expiration is tomorrow for both futures and options in lean hogs as Jul will take over as the front-month contract. Jul hogs held technical support and bounced off the bottom of the Bollinger Band this morning for a strong close. Trade for the rest of the week will likely be determined by the trend of the cutout which is on pace to be higher. Friday’s CFTC report showed funds as buyers increasing their net long position by 1,274 contracts to 10,491 contracts.

DAIRY HIGHLIGHTS: Class III and IV milk futures started the week where last week left off, with selling pressure coming from multiple areas. To start, the US dairy spot trade has now gone two straight sessions in which no products were bid higher. Over that span, block/barrel cheese has fallen 7.125c and looks to be starting a new downtrend, butter is down 7c and falling from the $3.00 level, and powder is down 1.50c. It appears that sellers are starting to get more aggressive with inventory at this time and there has been talk of demand softening in various areas of the country. Reports have been saying that cheese inventories are building as milk availability is strong. This could keep pressure on the market for the foreseeable future. The fact that US butter has reversed hard after hitting that elusive $3.00/lb level isn’t helping matters.