The CME and Total Farm Marketing offices will be closed Monday, June 20, 2022, in observance of Juneteenth Day

Beef exports are on track for another strong year. The recently released April export data showed the U.S. shipped 304 million pounds of beef, steady with the month of March, but 6% higher than April of last year. The two largest destinations for U.S. beef have been Japan and South Korea. Japan exports have been behind expectations, but recently Japan has lifted the increased tariffs after the import safeguard was met. Exports to Japan are expected to strengthen into the end of the year. What weakness that has been seen in Japan has been offset by improved strength from South Korea. China has become the third-largest destination, taking in 54 million pounds of beef in April. Even with the COVID-driven lockdowns in China, beef continues to make its way through the ports. Taiwan is another strong growth market so far, with nearly a 50% increase year-to-date. Analysts are expecting total exports to reach a 5% growth year-over-year, and that target is well within reach as beef export demand remains strong. 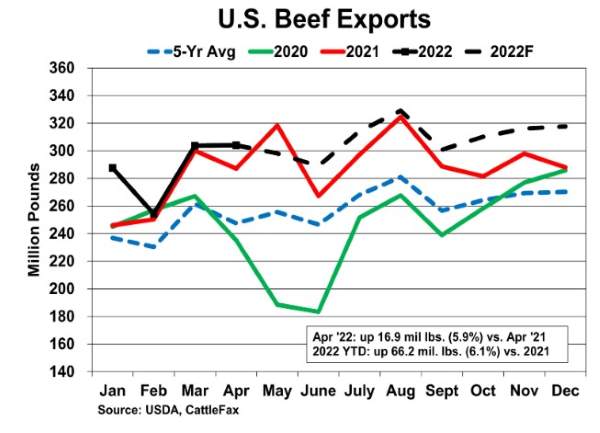 CORN HIGHLIGHTS: Corn futures started the day strong with double-digit gains, but by day’s end finished in the red with Jul losing 3-3/6 cents closing at 7.84-1/2 and Dec down 4-0 at 7.31. Earlier in the session, Jul peaked at 8.00 (the first time at 8.00 since May 18). Dec peaked at 7.49-1/4. Weakness in the energy complex on talk the administration is considering limiting energy exports, coupled with a sharp sell-off in the wheat complex weighed on corn futures late in the session. Earlier strength was tied to a mostly warm and dry forecast for next week, as well as on extended models.

The markets are closed on Monday due to the observance of Juneteenth Day. Therefore, one might expect that by Monday evening at 7:00 central when the markets open, either forecasts will remain mostly unchanged, which will be supportive for price, or will be more conducive to crop growth setting the tone for more sideways to lower trade. For the week, Jul corn added 11-1/4 cents and Dec 10-1/2. This was the second week in a row with positive closes. Futures again ran out of steam at the top end of the Bollinger Band. To put recent price movement into perspective, Dec futures are trading at the same level as they were the second week of April, a sign that prices are struggling to hold gains yet are also well supported. If behind on sales, get current with recommendations. As weather goes so likely will price movement.

Soybeans were higher at the start of the day but fell as crude began to plunge later in the day, with crude oil nearly wiping out its gains from the past month. Soybean oil took the brunt of the sell-off as bio-fuel related products are sensitive to moves in oil. Strong demand has been offering support to soybean futures, and U.S. old crop export sales are already well above the USDA’s revised export number of 2.170 bb by nearly 44 mb. New crop soybean sales are record large for this point in June at 481 mb. Soybean crush margins have fallen significantly from their recent highs but remain near 1 dollar per bushel for Aug, but this may continue to slow down. Soybean meal has had its third consecutive higher close as meal-oil spreading has continued in favor of meal. Soybean meal cumulative export sales commitments are said to be the second-largest on record. China is reportedly selling another 500,000 mt of soybeans from their reserves and will likely be absent from the export markets. Weather is forecast to be very hot and mostly dry, with the EU weather model projecting the high-pressure ridge to extend until July 1. Jul soybeans didn’t break any support today and remain relatively range-bound, while Nov trends slightly higher.

Significant ground was given up today in the wheat market. All three U.S. classes, as well as Paris milling futures, were severely lower. This may have been in part due to the rise of the U.S. dollar back to near recent highs. There is not much other fresh news to report, but there are rumors of additional talk of Russia and Turkey allowing grain exports out of Ukraine. Harvest picking up and profit-taking ahead of a three-day weekend may have also pressured the market. While wheat led the way lower in the grains, corn and soybeans also settled with losses and crude oil also traded sharply lower during today’s session, which might lead one to think there was a change in the headlines or forecast. However, we are somewhat left scratching our heads, as we could not find any major change to either. From a global perspective, French wheat conditions have declined to 65% good to excellent as temperatures are reported to have hit 104°F there today. Due to the high heat in France, Spain, and Germany, some private estimates of the EU wheat crop are being reduced by 4-6 mmt. This should be supportive to price and given the problems the wheat market has already seen this year we expect support in the market long term.

CATTLE HIGHLIGHTS: Live cattle futures finished firmer on the day as the market stayed supported by the strong cash trade and the prospects of hot weather in cattle country next week. Jun cattle gained 0.275 to 138.025, and Aug cattle were 0.275 higher to 136.575. Feeders finished the day with a good price recovery as Aug feeders were 1.650 higher to 172.950. For the week, Jun cattle gained 1.825, and Aug live cattle added 0.375. In feeders, Aug feeders were 1.525 lower on the week but finished well off the week’s lows.

The cattle market was very resilient again on Friday despite weakness in crude oil and equity markets. For most of the session, grain prices were stronger, so the performance by the cattle complex was impressive with those headwinds over top. The cash market was the strength on the week, providing the support. With business essentially done for the week, Southern live trade this week was at mostly $136 to $140 steady to $4 higher than last week’s weighted averages. Northern dressed deals have had a full range of $223 to $236, mostly $230, roughly $4 higher than last week’s totals. The cash market has been supported by the forecasts for hot weather, and the drop in carcass weights. Packers have been forced to bid up to secure supplies. Those hot temperatures are forecasted again for next week, and the heat will likely stress cattle, providing support under the market. Retail demand is being closely watched in this time window past Father’s Day. At midday, cutout values were mixed with Choice values slipping 1.11 to 266.05 but Select was 1.89 higher to 247.27. The load count was moderate at 78 loads. On the week, retail values have trended lower for both choice and select products, which is typical in this time window until the market sees buying strength for the July 4th holiday. Feeder cattle rebounded nicely off Thursday’s selling pressure with triple-digit gains. The strong cash market tone and rising Feeder Cash Index values help support the feeder market. Cattle numbers are still trending lower, and the Feeder Cash Index was firmer, gaining 1.61 to 162.17. Talk of a strong countryside cash market for feeders is helping support the overall feeder market. The feeder market will be keeping a close eye on grain markets next week and the weather forecast. If hot and dry forecast models are realized, strong buying could be triggered in the grain markets, which could weigh on feeder prices. A good week overall in live cattle markets as the cash market pushed the live cattle futures higher. The influence of weather and outside markets will likely be big parts of the puzzle for prices next week.

The pork cutout had an impressive gain of 4.04 this morning, which was followed by an increase of 5.57 from yesterday’s afternoon report. This strength in the cutout along with rising cash, the aggressiveness of the packers, and good export sales numbers have given hog futures the momentum to continue their upward trajectory. Weekly slaughter estimates have been reduced to 455k head, down from 472k head, and with these increases in cash and cutout the question remains if the hog herd is smaller than anticipated. The intense heat may be a factor in limiting the herd or putting pressure to purchase hogs and get them processed. On June 29, the market will get the newest release of the Quarterly Hogs and Pigs report which should help the market get a better idea of the trajectory for the second half of the year. Jul hogs closed above their 50-day moving average for the first time since late April and continue their trend higher.

DAIRY HIGHLIGHTS: The July Class III contract fell more than a dollar on the week, closing out Friday’s trade at $23.56. Despite finishing 4.3750 cents higher today, the block/barrel average was still down almost a dime on the week at $2.15125/lb. This totals 26.1250 cents of losses since putting in the 2022 high on May 18, with this week portraying a more bearish tone in the regional cheese reports. If cheese fails to find some footing soon, Class III milk could look expensive with many nearby contracts hanging near $24.00. Conversely, one could argue milk futures had made quite a run from early May to early June and were due for some technical retracement.