Class III milk futures have been trading in a range since the first of March and are showing signs of breaking that range.  Since the beginning of March, Class III milk futures have been trading in a $1.50 trading range from $23.50 on the bottom to $25.00 on the top, as prices have bounced back and forth off those two points.  The dairy market has been supported by firm cheese prices and good overall product demand, but recently, cheese prices have lost values, which has pulled milk futures through the bottom of the range. Block cheese prices have dropped from $2.40 a pound to under $2.10 on Tuesday’s trade.  Even with milk production being lower year-over-year, the concern for the domestic consumer and inflation impacts on cheese demand has pressured the market.  The milk futures may be susceptible to a break, led by technical selling, especially given the amount of time prices were in consolidation. 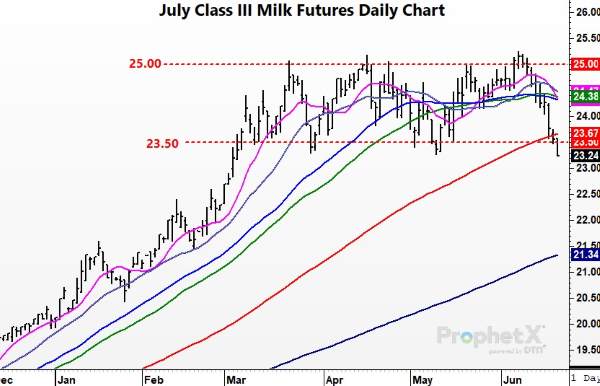 Corn was higher last week as worries about hot and dry weather came to the forefront, but the latest forecasts show that the northwestern Corn Belt will get some relief from the heat this week, but chances of rain remain limited. Other than minor changes in the forecast, there wasn’t any big news to warrant the sell-off seen in corn today, so it seems like there may have been fund selling bleeding lower from the sell-off in the wheat market. Friday’s CFTC data showed that funds had net longs of 399,775 contracts, which is a big number that is vulnerable to some liquidation. Brazil is on track for record corn production for 2022 and is reportedly 11% completed with harvest as of last Thursday. On the demand side, the USDA said that 46.6 mb of corn were inspected for export last week, more than the weekly amount needed to reach the USDA’s export estimate of 2.450 bb for 21/22. Friday’s USDA report showed that one bushel of 8.12 corn in Iowa could produce 9.67 worth of ethanol and distiller’s grains, a narrower difference of 1.55, but should still be enough to encourage ethanol production and keep basis firm throughout the Midwest.

Lower palm oil was the main culprit behind the sell-off in the soy complex today, as palm oil has seen a 21% drop over the past two weeks, which puts it at its lowest level in over four months. The two-year rally for the world’s largest source of vegetable oil may be over as the expectation of more exports out of Indonesia this month has driven prices lower and has affected both canola and soybean oil. Crude oil was higher and may have provided some support amid a bearish day of selling in the entire grain sector. Following the drop in soybean oil prices last week, Friday’s USDA report showed the combined crush value of meal and oil dropping from 20.47 to 19.81 and the premium above the cost of soybeans in Illinois shrank from 2.70 per bushel to 2.31. The premium is still high enough to incentivize processors, but is also the lowest since August 2021. According to the USDA, 15.7 mb of soybeans were inspected for export last week, about 10 mb short from the amount needed each week to achieve the USDA’s export goal by the end of August. Soybeans are now 94% planted in the US, up from 88% last week, and 68% are rated good-to-excellent, down from 70% last week.

Wheat futures were strongly lower as the technical sellers jumped into the market as prices crossed back below the $10.00 level in Chicago contracts for the first time since March 1st.  In addition, Chicago wheat price broke bask under the 100-day moving average for the first time since early February.  The wheat markets are on the defensive and subject to additional long liquidation.  Harvest picking up and the K.C market may be be seeing some additional hedge pressure.  At this point, harvest results are mixed due to the dry conditions in large portions of winter wheat country.  Where there was moisture, yield has been supported, but in other areas dealing with drought, yield results are poor and talk of abandonment of acres in some locations have been discussed.  As of Sunday, 25% of the winter wheat crop has been harvested, up from 10% last week.  With some recent moisture, spring wheat conditions have improved, up to 59% good/excellent, compared to 54% from last week and slightly above expectations.  From a global perspective, French wheat conditions will be closely monitored as temperatures are reported to be challenging record highs in that region over the past week.  Estimated wheat crop has been forecasted to be reduced, but further tightening of production forecasts may be needed.  A major head win in the wheat market is the large Russian wheat crop, and the currency battle with the Russian ruble.  The ruble is traded at near-record lows against the U.S. dollar, weigh on global wheat prices and providing value to those countries looking to still purchase the product, despite the world sanctions. The wheat market has broken down technically, but could be moving into value territory and is oversold.

Despite strength in the feeder market and supportive outside market, live cattle futures were looking for direction on Tuesday as prices still struggle with the 100-day moving average.  The 100-day is key swing point in the cattle charts and prices have been consolidating on this point the past four sessions.  Cattle futures were watching for the development of the cash market again this week, which will likely be the lead in the cattle market price direction. The cash market was quiet to start the week as bids and asking values were still undefined.  The expectation is for cash trade to develop later in the week at steady to higher than last week. The cash market has been supported by the forecasts for hot weather, and the drop in carcass weights. Packers may have to be forced to bid up to secure supplies. At midday, beef carcass cutout values were firmer with choice values adding 2.44 to 268.94 and select was 1.03 higher to 247.42. The load count was moderate at 58 loads. Feeder cattle saw strong buying support with triple-digit gains. The strong cash market tone and rising Feeder Cash Index values help support the feeder market. The Feeder Cash Index was firmer, gaining 2.86 to 165.03. Talk of a strong countryside cash market for feeders is helping support the overall feeder market. Adding to the buying strength was a sharp selloff in grain prices, triggering buyers into the feeder market. Both live and feeder cattle markets have some buying strength, and favorable fundamental news to push the market higher.  Technically, each market has a key challenge of resistance over top, which if broken, could lead to some strong buying support.  The cash market will be the likely driver of the potential push higher.

July futures are leading the market higher, being fueled by a strong cash market tone.  July hogs are challenging the 100-day moving average, which has been a swing point in the hog markets.  If July futures can push this barrier, the next resistance at 114.000 will be a spot the market needs to clear to break to the upside. Direct cash hog markets were quiet on Tuesday, as prices drifted .13 lower to a weighted average price of 114.81, but the 5-day average moved firmer to 115.78, still holding a premium to the futures.  The Cash Hog Index was .41 higher to 109.61, reflecting the cash tone.  Pork carcass values were 1.41 lower at midday to 110.46.  Load count was moderate at 163.92 loads.  The retail demand is in a soft period in the window between Father’s Day and the 4th of July.  Hog Slaughter was estimated at 468,000 head on Tuesday, steady with last week, but 6,000 behind last year.  Next week, June 30, will bring the USDA Quarterly Hogs and Pigs report, which should help clear the picture on hog supplies going into the fall and next year.  The hog market looks strong in the near-term, being led by a healthy cash market tone.  If price can clear some barriers, more upside potential in in front of this market.

DAIRY HIGHLIGHTS: Class III futures were mostly weaker today with the second month July futures closing down 29 cents at $23.27. That contract has only managed one higher close in its last nine trading days after a short-lived rally back above $25.00. The spot trade saw blocks dropping 4.50 cents and barrels gaining 1.25 cents to bring the average to $2.1350/lb as the short-term downtrend persists. While export demand remains robust, domestic demand has ebbed on a macro scale and production/inventories remain adequate. Class IV contracts were mixed on the day but the July contract closed 15 cents higher at $25.50 following some recent retracement lower. Spot butter was down a penny while powder closed the same amount higher for a quiet Class IV product trade.