The soybean oil market has been under strong selling pressure over the past couple of weeks, and that weakness has spilled over into the soybean futures market.  Soybean oil has been one of the supporting legs under the soybean market on the demand for bean oil for bio-diesel, and the shortage of global edible oils that has pushed those prices to all-time highs.  Soybean oil, after Wednesday’s session, has traded lower for nine consecutive days, the first time the market has done that since 2017.  During that time, the July contract has dropped $17.00/pounds since the high on April 29, and nearly $13.00/pounds in that nine day selling window.  Two major factors have come into play weighing on soybean oil prices.  Indonesia has issued 1.51 MMT of palm oil permits as of Wednesday morning, opening up new supplies to the market as harvest nears. This was reversing the export ban they placed on the edible oil just over a month ago.  In addition, crude oil prices have tumbled off recent highs, adding to the selling pressure in the soybean oil market.  That soybean oil market is looking for a low, and the strong selling pressure has the soybean contract doing the same so far this week. 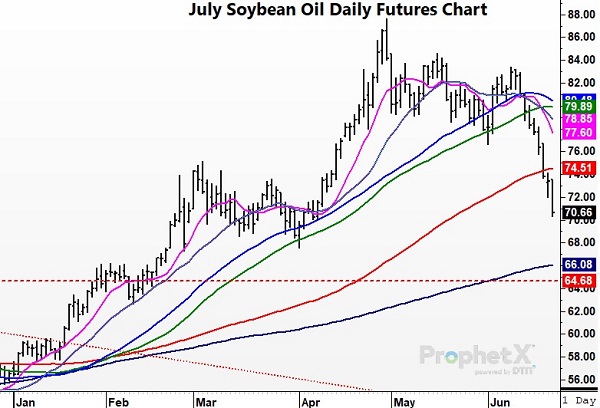 CORN HIGHLIGHTS: Corn futures closed mixed with strong basis levels providing support for July futures and deferred contracts lower on another below normal temperature forecast in the most recent 6-to-10-day outlook, along with another dive in crude oil prices. December gave up 7-3/4 cents to end the session lower for the third consecutive day closing at 6.93-3/4.

Despite crop ratings being slightly less than expected at 70% good to excellent and triple digit heat, new crop corn futures continue to slide. 70% is above a year ago (65%) and the five-year average. The most likely scenario explaining the downdraft for price is managed money leaving the corn market. It is not unusual, for this time of year, for corn prices to trend lower. If you’re betting on recent history, you’re moving out of long positions, going short, or both. Corn production capability has improved vastly over the last couple of decades to the point where better tillage practices, better farmers, and better genetics all favor the odds of a good crop unless proven otherwise. Wheat prices failed to hang out the strong gains today, finishing mixed, which may weighed on corn futures late in the session, as did sharp losses in soybeans of 21 to 34-1/2 cents. Bottom line, the market just doesn’t seem to generate speculative buy interest, despite what would be termed a less than ideal weather outlook with expectations of a generally drier forecast as most of the Midwest. December futures have lost near 50 cents in three sessions. The next big reports are the Quarterly Stocks and Acreage reports.

SOYBEAN HIGHLIGHTS:  Soybean futures closed lower following a continued drop in crude oil and palm oil. Fears of recession are increasing, which is taking a toll on crude, which the soy complex is sensitive to. Jul soybeans lost 28-1/4 cents, closing at 16.52-3/4, and Nov lost 34 cents at 14.76-1/2.

Soybeans have been facing pressure from the sell-off in crude oil over the past two weeks, along with dramatic losses in palm oil, which lost another 9.7% today, the lowest price in 5 months. As a result, July soybean oil is at its lowest price in over two months, with nine consecutive lower closes, and is pressuring funds to liquidate in a market that looked much more bullish earlier this month. The anticipation of increased palm oil supplies for the first time since the pandemic began has been a bearish change of course for oil crops. Crude oil continues to fall, despite supply concerns as President Biden attempts to pass a temporary suspension of the gasoline tax, which would increase demand in a tight supply market. Yesterday, the USDA reported that 94% of soybeans were planted and 83% emerged with 68% of the crop receiving a good-to-excellent rating, down from 70% last week. While the weather is still hot, temperatures are now forecast to be more moderate than predicted over the weekend, and the northern Plains have an improved moisture profile. July soybeans closed below the bottom of their Bollinger Band and 6 cents above the 100-day moving average, while November closed below their 100-day moving average.

News that Russia launched new attacks in Mykolayiv, Ukraine had wheat futures higher this morning with the strikes hitting two grain storage facilities; the damage was reportedly quite extensive. Despite these reports, wheat gave up its gains into the close. This news does appear to indicate that Ukraine, for the foreseeable future, will not be shipping grain via the Black Sea. The hopes that export corridors would be opened up this summer are dwindling as Russia ramps up their assault. Harvest pressure is perhaps what is contributing to weakness in wheat with the winter crop reported to be 25% harvested. Conditions did decline 1% from last week to 30% good to excellent and Kansas yields so far are a little bit below expectations though. Spring wheat is also coming along with planting 98% complete and 89% emerged – with the delays due to wet weather, North Dakota is the laggard with only 80% emerged. Globally, Paris milling wheat futures are at the lowest levels since mid to late April, though high temperatures there are a concern for the crop. In other news, Algeria purchased 600,000 mt of wheat and Pakistan is searching for 500,000 mt. As a reminder, next week will feature the USDA’s planted acreage report on June 30.

Overhead resistance still holds over the cattle market and a weak commodity market tone made it difficult to push prices higher. Cattle futures were watching for the development of the cash market again this week, which got some first business for the week today.  A light trade developed in parts of the South at $138, roughly steady to $2 lower than last week’s weighted averages. A few other bids were noted, but those were mostly steady with last week.  With the weakness, the June futures is running at a discount to the cash market with expiration right around the corner on June 30. More cash trade will develop later in the week, but the initial tone was steady to lower.  At midday, beef carcass cutout values were softer with choice values losing .97 to 266.59 and select was .01 lower to 246.69. The load count was moderate at 97 loads. Despite a weak grain market, the overall weakness in the cattle market pressured the feeder complex.  The cash market in feeders has been supportive and Feeder Cash Index values help support the feeder market. The Feeder Cash Index was firmer, gaining .18 to 165.21. The cattle market may be starting to look at the June Cattle on Feed report to be released after the market close on Friday.  Expectations for the report are expecting to see total cattle on feed at 102%, placements at 100%, and marketed 103% of last year. The market will be closely watching the placement numbers to gauge the cattle crop going into the end of the year and 2023. Resistance holds the market in check, and the discount of the futures market to the cash market is a unique twist going into June expiration. The ongoing development of cash going into the end of the week and outside markets in general will be key for cattle prices going into the end of the week.

LEAN HOG HIGHLIGHTS: Hog futures followed the cutout again and closed lower with a lower cutout, but higher cash as the packer was aggressive with purchases yesterday. Jul hogs lost 0.875 to 111.850, and Aug hogs lost 1.475 to 108.325.

Hog futures traded lower throughout the day despite higher cash and the packer aggressively buying hogs. Cash rose another 3.46 at today’s close, putting the weighted average price at 122.45, with futures at a significant discount. The cutout pushed trade lower today being down 1.01, but showed a small gain of 0.29 at today’s close, which combined with higher cash could be supportive of tomorrow’s trade. One bearish factor has been a lagging slaughter pace, which saw a revision to Monday’s slaughter, as 18,000 head less than initially stated. Lower slaughter seems to be due to tight supplies as the cutout has trended higher, but we will get a clearer picture of that from the Hogs and Pigs report on June 29. July hogs were unable to get above the 100-day moving average, which has been acting as resistance, but have maintained their level above the 50-day. The trend for the past two weeks is higher and increasing cash and cutout should continue to support this move.

DAIRY HIGHLIGHTS: Milk futures bounced back on Wednesday as buyers offered support after yet another bullish milk production report. The July to December 2022 Class III milk average snapped a seven-day down streak by recovering 29c and closing back up at $23.7350. The May production report showed that milk production was down 0.70% and cow numbers only rose 2,000 head from April to May. With US milk cows at 9.405 million head, that is still 102,000 head below the head count from May 2021. This is keeping production across the country down, even though milk per cow was up 8 pounds per cow from last year. For today, buyers supported the market back higher despite ongoing talks of recession and a cheese price that is about 30c off the highs.