Strong recovery in grain futures to start the week, and the hard red spring wheat (HRSW) was a leader, breaking out to new highs. The front-month Jul contract pushed 22 cents higher and closed at 844-3/4 cents, but more importantly, established new contract highs. On longer-term monthly charts, HRSW extended above the 2017 highs at 8.16, opening the door for further upside potential. For the month of June, the Jul contract has gained 1.17, as drought conditions have severely impacted the crop in the northern Plains and Canadian prairies. The U. S. crop ratings last week were 27% good to excellent, and as weekend rains were not impactful, expectations are for those ratings to decline even further. The long-range forecast is holding little relief, and the talk of abandonment of acres is starting to surface. Technically, the upside potential may have the market testing the 2011-2012 highs over the 10.00 per bushel levels. 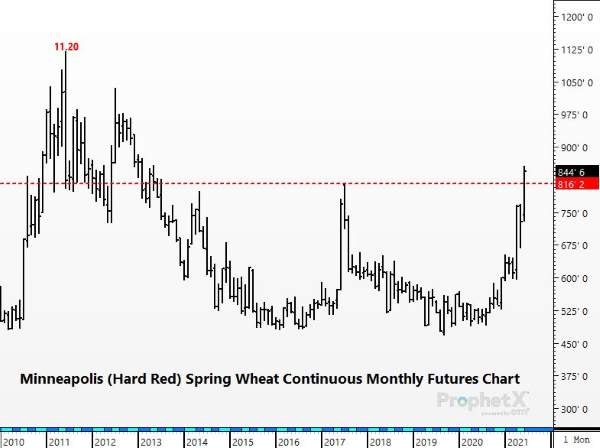 CORN HIGHLIGHTS: Corn futures gained back Friday’s losses by mid-morning as a lack of rain forecasted for the northwest regions of the Midwest along with frost concerns in Brazil provided support. Prices continued to rally with Jul ending 39 cents higher at 6.75-1/2 and Dec 28 stronger at 5.47-1/4. Export inspections at 39.7 mb were termed neutral to supportive. This now puts year-to-date inspections at 2.237 bb, 78.5% of the forecasted 2.850 bb total sales for the 2020-2021 marketing year. This is 70% ahead of the same time a year ago. The harvest for second crop corn in Brazil has recently started where the approximately 5% reported. Early feedback suggests the yield is less than expected which is already down due to dry weather. Because of a dry planting season for soybeans, the crop was off to a slow start, and consequently, the second crop of corn planted later than usual. In turn, that means the corn crop is off to a slow start and more vulnerable to potential freeze than in a normal year. Time will tell but forecasters are suggesting there will be some damage to the crop that is still maturing. On Wednesday, June 30th, two very significant and historically market-moving reports will be released. The Acreage report is expected to show 93.8 million acres, an increase of 2.6 million from the March 31 report. The range is quite wide from 92 to 95.8 million. Quarterly stocks are estimated at 4.13 billion bushels, which, if realized would be 837 mb less than last year at this same time.

SOYBEAN HIGHLIGHTS: Soybean futures finished with strong gains of 27-1/4 cents in Jul to close at 13.57 and 42-3/4 cents in Nov to end the session at 13.12-1/2. Today was a welcomed finish after strong losses last week. Both soybean meal and oil finished higher today with meal gaining near $5 and oil charging higher by well over 250 points. Welcomed rain was beneficial to crops over the weekend in most of the Midwest but in some areas, too much rain was noted. In other areas too little. The northwest regions of the Midwest continued to struggle with heat and lack of significant moisture. It does not appear there is much in the near-term forecast for the next week to 10 days. Export inspections at 3.8 mb were again on the light side. Year-to-date the total inspected is 2.101 bb of an estimated 2.280 export sales forecast. Currently, inspections are 92.2% of the forecasted total sales. Big reports are out Wednesday with quarterly stocks estimated at 773 mb, down 608 mb from a year ago. If the report is close to this figure, it will again confirm tight supply and no room for error on this season’s crop. Acreage is estimated at 89,1 million, an increase of 1.5 million from the March estimate.

WHEAT HIGHLIGHTS:  Jul Chi up 9 cents at 6.46 cents and Dec down 10 3/4 cents at 6.58 3/4.  Jul KC wheat up 17 3/4 cents at 6.18 and Dec up 17 1/4 cents at 6.36. All grains traded higher today after the trade surveyed a weekend of not enough rain in the northwestern Plains and too much rain in others – combined with news of frost in Brazil.  For wheat specifically, the continued drought in the northern Plains refusing to dissipate continue to keep MNPLS wheat supported, which was up another 20 cents today at 8.42 1/2 at the close, highest close since 2013. Spring wheat headed is 48% versus 39% being the average.  Spring wheat condition is rated 20% good to excellent, down 7% from last week.  Alternatively, 39% of the crop is rated poor to very poor versus 37% last week. Temps in Oregon soared to an all-time record high of 112 in Portland on Sunday and an expected to be just as hot, if not hotter, today and current winter wheat crop rated 71% poor/very poor (up 1% from last week) and only 11% rated good – 0% is rated excellent. Winter wheat harvested is at 33% – behind the 40% average for this time of year. The market is also preparing for Wednesday’s USDA report.  It is expected the USDA will reported 45.95 million acres of US wheat planted in 2021 with 33 million for winter wheat.