The CME and Total Farm Marketing offices will be closed Monday, July 4, 2022, in observance of Independence Day

Another sign of the possibly weakening commodity sector had be the price action in crude oil for the month of June.  On today’s close, crude oil futures will be posting its first negative monthly close since November of last fall.  After failing to push through the $120/barrel price level, the front month crude oil contract is going to lose nearly $9.00 a barrel on the month.  This is the second time in the past couple of months that crude oil prices have failed  to hold this level, falling off the $130 level in March.  Prices were supported by the breakout of the Russia-Ukraine war, but has faced headwinds at these levels.  Demand concerns have triggered as China COVID lock downs were a factor, softening consumer demand at high prices, and just on-going pressure from global governments to reduce energy prices.  In the big picture, crude oil supplies globally are still tight, and prices are still holding potential to rally off tight supplies, but at least going into the end of June, the money was moving out of the market. 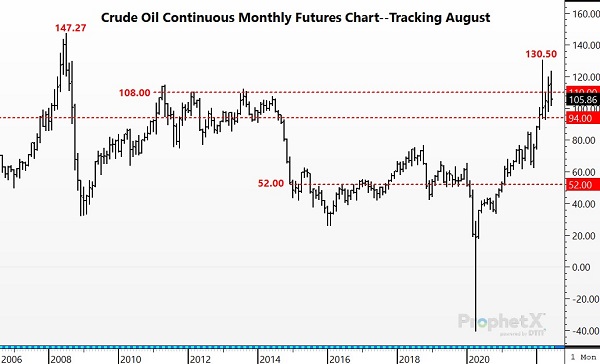 CORN HIGHLIGHTS: Corn futures went defensive in the morning hours prior to the report and despite neutral numbers, sold off into the close for the seventh time in eight sessions. July futures lost 26-1/2 cents to close at 7.43-3/4 and December gave up 34 to end the day at 6.19-3/4. December has now lost 1.30-1/2 from its high on June 17 through today’s low of 6.18-3/4. Commodities continue to lose value with crude oil off again, losing more than 4.00 today after a negative reversal yesterday.

The Quarterly Stocks report at 4.346 bb, was termed neutral, in line with the pre-report average estimate of 4.330 bb. Acres at 89.2 were also in line with the average estimate of 89.69. The initial reaction was mostly uneventful, however, as the session worn on, it is likely that the lack of buying was evident, and traders likely added to recent short positions or gave up on longs. Moving into a three-day weekend, (after tomorrow), it is likely that many bulls gave up. The bigger picture is indicating weakness in equities and almost all commodities and what might be termed wholesale liquidation. Yet, despite highly over-sold conditions, the most recent 6-to-10-day forecast has most of the Midwest above normal in precipitation and in temperature. For many who are experiencing dry conditions, rain is becoming paramount. The NOAA updated forecast today indicates the South and southwestern portions of the Midwest below normal in precipitation and most of the Midwest as above normal in temperature. Note, the USDA will re-survey parts of Minnesota, and Dakotas and if any changes are warranted, NASS will publish updated acreage estimates in the July 12 Crop Production report.

SOYBEAN HIGHLIGHTS: Soybean futures slid lower into the close. The exception is the July contract, but today is also first notice date for July grains. All eyes were on today’s reports, which turned out to be fairly neutral overall, and perhaps even a little bullish for beans. Even so, soybeans settled lower. July soybeans gained 3/4 cent, closing at 16.75 and Nov ended the session 20-1/4 lower at 14.58.

Not only was it month and quarter end, but the market also received some important data today in the form of quarterly stocks and acreage. Soybeans were lower at midday before the reports, rallied after they came out, and apart from July, had double digit losses. It was a rollercoaster ride to say the least. The trading range was also quite wide today with a low in Nov of 14.51-1/2 and a high of 15.07-3/4. On the surface, the report appeared to be mostly friendly to beans with acres coming in lower than expected at 88.33 million vs 90.43 million estimate. (This is still the highest number in four years though). The stocks number did come in higher than the anticipated 959 mb – at 971 mb. This likely hindered soybeans from rallying further or keeping their gains. This was also somewhat unexpected as cash basis levels would suggest that the stocks should have come in lower than the average trade guess. Today’s weakness in crude and soybean oil also played a part with both sharply lower. In addition to today’s big reports, the markets also got export sales – these were less than stellar and also probably contributed to the weak close. The USDA reported net cancellations of 4.4 mb of soybean export sales for 21/22 and an increase of 4.7 mb for 22/23. With two major reports out of the way, the market will probably go back to trading weather. Markets are closed Monday in observance of Independence Day, so any change to the forecast over a three-day weekend could lead to increased volatility next week. As an aside, the USDA will re-survey parts of Minnesota, and Dakotas and if any changes are warranted, NASS will publish updated acreage estimates on the July 12 Crop Production report.

Wheat closed lower across the board after the USDA said that 11.1 million acres of spring wheat were planted, the smallest area in 4 years, but not the lowest 50-year total as was earlier suspected. The USDA also said there were 660 mb of wheat on hand as of June 1, the lowest ending stocks total in eight years. Along with the low ending stocks total, US wheat demand finished 21/22 at 1.926 bb, the lowest in 12 years. Although this report was not unfriendly, trade was looking for more bullishness and funds took the opportunity to sell heavily. Net export sales for wheat came in at 18.3 mb with the Philippines as the top buyer, followed by Brazil and Mexico. Spring wheat has been plagued by lack of rain in the northwestern Plains, and crop ratings in Montana are only 28% good-to-excellent. Despite the not unfriendly report and fundamentals, funds have decided to sell, and September Chicago and MPLS wheat both closed below their 200-day average which was key support. Today was also first notice date for July contracts and Sep will soon be taking over as the new front month.

CATTLE HIGHLIGHTS: Live cattle futures finished mostly higher, as the June contract finished trading and the deferred contracts were looking like a value to the current cash market.  June cattle finished trading gaining 1.200 to 138.000, August live cattle gained .400 to 132.575.  Feeders had a strong day with triple digit gains as August feeders were 2.875 higher to 173.600.

The June contract stayed tied to the cash market into its final trade.  Trade was light today with some additional trade.  Most trade this week has been marked at $138 in the South, steady to lower than last week.  Northern dress trade was working around $234, again slightly lower overall than last week.  Trade is likely wrapped up for the week, especially with the holiday weekend on the horizon. Today’s slaughter estimates totaled 124,000 head, 2,000 more than last week, and 7,000 greater than a year ago, as the front-end supply still has plenty of cattle.   Beef carcass cutout values were lower at midday, with choice values losing 1.00 to 263.88 and select was .41 lower to 240.40. The load count was light at 68 loads. The weakness in retail values is a limiting factor in prices. USDA announced weekly export sales on Thursday morning and new sales of 17,000 MT for 2022 were up 52% from the previous week and 6% from the prior 4-week average. South Korea, China, and Japan were top buyers of U.S. beef last week. Feeder cattle posted triple digit gains as the grain market sold off aggressively after the USDA report on Thursday. Feeder Cash Index values were 2.36 higher to 166.44, reflecting a firmer countryside cash market tone.  Good strength in cattle markets overall, especially the feeders with the grain market selling off.  The heavy supply of front-end cattle will be a limiting factor, but August is undervalued compared to the current cash market. The cash market will still be the key for price direction in the near-term.

The hog market saw technical selling as prices closed under the 200-day moving average in the Aug contract. The sellers stepped forward despite the USDA Quarterly Hogs and Pigs report, reflecting the continued tightening of the U.S. hog supply. The report failed to bring any big surprises, which led to some profit-taking and technical selling. Cash trade has stayed firm overall as packers bid up for hog supplies. Direct morning trade was softer on Thursday losing 3.75 to 116.11 and the 5-day average traded to a rolling average price of 117.72. The Lean Hog Cash Index traded 0.38 lower to 111.26. The cash market may be starting to signal a peak, at least that is what the futures market may be trading. The trend currently is still higher. Demand has been more of a concern, and midday carcass values were lower, losing 1.47 to 114.91. Load count was light to moderate at 114 loads. The USDA weekly export sales released on Thursday morning saw new net sales of 32,300 MT for 2022, up 27% from the previous week and from the prior 4-week average. Top buyers of U.S. pork last week were Mexico, Japan, and Australia. The hog market will likely stay choppy, but the breakdown in prices on Thursday is concerning going into the end of the week. The market may be anticipating some potential softness building in the cash market.

DAIRY HIGHLIGHTS: Despite a spot trade that saw cheese unchanged at $2.1950/lb, up 7.6250 cents on the week, Class III futures fell hard today with the August contract down 51 cents. The July-December average fell 48 cents overall as many individual contracts are approaching their May low. Class IV action was down but to a lesser extent with the August contract unchanged and the proceeding months down six to 26 cents. Spot butter traded even today as it sits a half cent beneath its 2022 high of $3.00/lb. The spread between the second month futures in Class III and IV has shifted to a $2.41 premium in Class IV.