The CME and Total Farm Marketing offices will be closed Monday, July 4, 2022, in observance of Independence Day

The biggest surprise in the USDA Planted Acres report on Thursday was the sharp drop in soybean acres.  USDA placed soybean planted acres at 88.3 million acres, down from 90.95 million in the March forecast and well below expectations.  This was certainly an extremely bullish number, but prices have tumbled over the past two days since peaking after the report.  Part of the issue is the market doesn’t believe the USDA numbers, as the USDA announced a resurvey of the acres in northern states to make adjustments on future reports.  The expectation is for the market to gain back some of those 2.5 million acres lost after the resurvey.  The biggest factor hurting soybean prices has be the recession, and inflation trade.  Like other commodities, the soybean complex has been hard hit as speculative traders have stepped to the sideline on fears of a recession.  This has hit the soybean oil and soybean meal markets as well, rolling that selling pressure into the soybean market.  The market is likely getting undervalued, especially given the current supply picture, but for now, the technical selling is the driver in the market and price action. 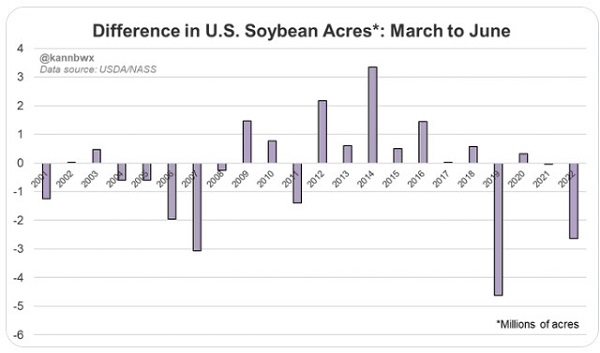 CORN HIGHLIGHTS: Corn futures, after experiencing a massive decline in June, finished mixed with July gaining 10-3/4 to close at 7.54-1/2. September lost 9 cents to end the session at 6.19-3/4 and December gave up 12-1/4 cents to close at 6.07-1/2, its lowest close since late February. For the week December lost 66-1/2 cents. This on top of a loss of 57 cents last week. The 6-to-10-day outlook yesterday afternoon again called for all the Midwest to see warm and wet (above normal precipitation). Sharp losses in soybeans and wheat added pressure to corn futures.

For many producers, the forecast holds promise, but they need more than a forecast. If predictions are accurate, the corn crop could be considered in very good shape by the end of next week. However, if dry conditions continue to prevail and rainfall totals are disappointing, extreme oversold technical indicators could suggest a snapback in price. Yet, the big picture perspective is that the commodity complex is in a major risk off and fundamental factors seem to have little bearing. Ukraine appears to be in as much of a difficult situation today as it has since the war began. Northern hemisphere production is critical. Perhaps one item that might alleviate some supply concerns is that Brazil’s second crop corn was record large. Yet, the Safrinha crop was still not as large as earlier forecasted due to drier weather that affected yield. The dollar has remained strong, but is currently trading near the same price it was more than two weeks ago. Since then, corn, soybeans, and wheat prices have virtually collapsed.

There is no beating around the bush – it was an ugly day for soybeans. The November contract completely gave up any gains from this week and the close surpassed last Friday’s low of 13.99-1/4. Nov actually closed at the lowest level since early February. Fundamentally, not much has changed other than the potential for a somewhat improved weather forecast next week. This leaves us somewhat scratching our heads, especially since yesterday’s reports were not necessarily negative to beans. There were unconfirmed rumors today that China cancelled purchases of US soybeans, which may have contributed to the sharp selloff. For reference, September soybeans on China’s Dalian exchange are around the equivalent of $19.43 per bushel. Bean oil and meal were also lower today, contributing to weakness, but spillover from lower corn and wheat were not helpful either. The general theme seems to be that money flow is leaving the commodity markets due to increasing concerns about US recession and inflation. There is fear that the Fed and central banks may have reacted too late and if they continue to increase interest rates, it will push the country into a recession. The month of June was the worst month for commodities as a whole since the pandemic began in 2020 and our worry is that the trend will continue lower. If you view the glass half full, however, some would argue that the markets are altogether oversold and due for a bounce. As a reminder, markets are closed Monday in observance of Independence Day and will re-open Tuesday at 8:30 AM central.

Wheat closed lower across the board after the USDA said that 11.1 million acres of spring wheat were planted, the smallest area in 4 years, but not the lowest 50-year total as was earlier suspected. The USDA also said there were 660 mb of wheat on hand as of June 1, the lowest ending stocks total in eight years. Along with the low ending stocks total, US wheat demand finished 21/22 at 1.926 bb, the lowest in 12 years. Although this report was not unfriendly, trade was looking for more bullishness and funds took the opportunity to sell heavily. Net export sales for wheat came in at 18.3 mb with the Philippines as the top buyer, followed by Brazil and Mexico. Spring wheat has been plagued by lack of rain in the northwestern Plains, and crop ratings in Montana are only 28% good-to-excellent. Despite the not unfriendly report and fundamentals, funds have decided to sell, and September Chicago and MPLS wheat both closed below their 200-day average which was key support. Today was also first notice date for July contracts and Sep will soon be taking over as the new front month.

Strong price action started the day on the August contract, but prices failed to push through the 200-day moving average, before seeing some end of the week profit taking.  Trade early next week after the holiday will be key or setting the tone in cattle prices.  Cash cattle trade was basically done for the week.  This week, southern live business was marked at mostly $138, steady to roughly $1 lower than last week’s weighted averages. Northern dressed deals were marked at mostly $234, not quite $1 lower than last week. Today’s slaughter totaled 121,000 head, 1,000 below last week, but 7,000 more than a year ago. Saturday’s kill is estimated at 16,000 head, bringing the weekly total to 636,000 head, 30,000 less than the prior week, but 8,000 greater than the previous year.  Beef carcass cutout values were mixed at midday, with choice values losing .47 to 263.53 and select was .03 higher to 240.60. The load count was light at 71 loads. The weakness in retail values is a limiting factor as retail prices have trended lower overall this week. Feeder cattle posted triple digit gains as the grain market sold off aggressively in follow through after the USDA report.  The 100-day moving average is the barrier to watch, some deferred contracts broke this barrier today, opening the upside.  Front month futures still have work to do to get through this resistance. Feeder Cash Index values were .77 lower to 165.67, but traded 1.96 higher on the week, reflecting a firmer countryside cash market tone.  Good strength in cattle markets overall, especially the feeders with the grain market selling off. This has triggered money flow into the cattle complex. The heavy supply of front-end cattle will be a limiting factor, but August is undervalued compared to the current cash market. The cash market will still be the key for price direction in the near-term.

It was a choppy day in the hog markets, as the August contract tried to push back through resistance at the 200-day moving average. Aug prices closed under the 200-day moving average for the second straight day, and if prices are under this value are susceptible to a downside move. Support under August is the $101 level, which was tested and held on Thursday. Cash trade has stayed firm overall as packers bid up for hog supplies. Direct morning trade was softer on again on Friday losing 2.86 to 113.25 and the 5-day rolling average traded to a price of 116.32. The Lean Hog Cash Index traded 0.42 lower to 110.84 but is still holding a small premium to the July Futures. For the week, the Cash Index was .15 higher, but may beginning to slow. The cash market may be starting to signal a peak, at least that is what the futures market may be trading. The cash trend currently is still higher. Demand has been more of a concern, and midday carcass values were firmer, 1.01 to 108.26. Load count was light to moderate at 180 loads. Retail values were choppy this week, but trended lower overall. The cash market may be showing signs of topping out, and that could be limiting the upside potential in hog markets. The cash market next week after the July 4 Holiday will go a long way in futures prices. Prices are working sideways and consolidating overall, looking for a reason to break one way or another.

DAIRY HIGHLIGHTS: Class III prices took it on the chin this week; the second month August contract was down $1.17 with a $22.42 close, totaling $2.32 of losses in the last three weeks. The spot market trade was higher on the week; however the block/barrel average was 7 cents higher with a finish at $2.18875/lb today, while whey closed at $0.50/lb and up 2.50 cents from last Friday. With the spot markets hanging in there, the milk future weakness is likely tied to the downfall in grain/feed prices, the higher dollar, and the overall trend of managed money starting to exit commodity longs.