Adding to the pressure on the commodity markets, the U.S. Dollar Index has traded to its highest levels in 20 years. On this shortened holiday trading week, the U.S. Dollar Index has surged higher, pushing to levels that the index hasn’t traded at since 2002. The strong move in the U.S. dollar is coming from the tighter monetary policy in the U.S., as the Fed tries to get a handle on inflation. In addition, speculator dollars are using the strong dollar as a hedge against foreign currency as global economic concerns continue to grow, as foreign countries try to deal with inflation and recession fears. The strong dollar tone has weighed on commodity prices, which saw multiple markets turn more negative at the end of June trade. The strong dollar is a limiting factor regarding demand for U.S. goods and products, and the current uptrend in the dollar has the commodity market concerned that demand for U.S. commodities may tighten. 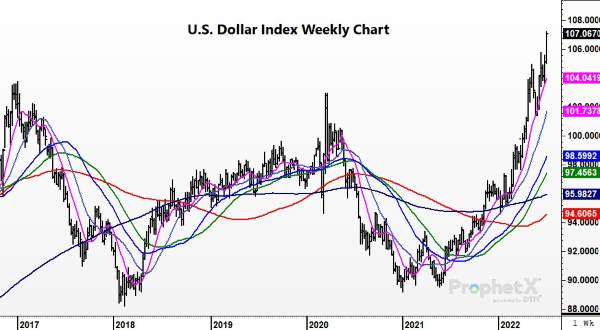 CORN HIGHLIGHTS: Corn futures recovered late in the session after another day of double-digit losses by midday. Jul corn gained 8-1/4 to end the day at 7.44-1/4 while Sep added 7-1/2 to close at 5.99-3/4. Dec added 6-1/2 closing at 5.85. Oversold conditions, a recovery in equities, and a drop in crop ratings were likely reasons buyers jumped in today.

Crop ratings indicated 64% of the crop as good-to-excellent, down 3% from last week and now down 8% from 3 weeks ago and in line with the 5-year average. Much needed rains fell the past 24 hours helping to alleviate some drier parts of the Midwest, namely parts of Indiana and Ohio, yet more will be needed and on a wider scale to keep the ratings from declining further. The bigger picture suggests over-sold, yet a continuous concern of a recession coupled with rain on the radar somewhere in the Midwest is keeping prices under pressure. The second half of July weather models appear to be pointing more toward a warmer and drier pattern. Bulls will argue that in a span of two weeks, buyers have their best opportunity in three months. Yet, announced sales of more than 100,000 mt (threshold at which sales are reported daily) have not surfaced.

SOYBEAN HIGHLIGHTS: Soybean futures were up and down today ultimately closing higher as fund activity finally took a breather and prices are beginning to level off. A drop in the crop’s good-to-excellent rating was a contributing bullish factor. Aug soybeans gained 7-1/4 cents, closing at 14.46-1/2 and Nov ended the session 6-3/4 higher at 13.22-3/4.

The massive sell-off in soybeans finally took a breather today and prices seem to be settling down with far less volatility. Yesterday, the USDA reported that soybean crop conditions fell to 63% good-to-excellent versus 64% expected, and 65% from last week. Kentucky saw conditions decline by 19% from last week as extreme drought in the area takes a toll on the crop. 9% of the U.S. crop is rated poor-to-very poor, and 96% has emerged, which was the same as the previous average. There were more rumors that China has canceled 5 to 8 cargoes of old crop beans most likely in favor of cheaper Brazilian soybeans, but those rumors were already floating around and have probably already been priced into the market. Soybean meal closed higher and has escaped relatively unscathed from the sell-off compared to the other two soy products. Soybean oil was lower as crude oil continued to fall, as well as Indonesian palm oil, which hit its lowest level since September following news that the country would raise export quotas. Weather conditions in the North have improved with rain in the forecast and more moderate temperatures. Soybeans remain oversold, and the next target on the chart for Nov is to close the gap at 13.91, which would bring it back above the 200-day moving average.

After trading both sides of neutral, wheat settled with moderate losses. This is discouraging, but on the bright side, Sep Chi closed about 20 cents off of the daily low. Technically, all three classes of U.S. futures are very oversold, are due for a correction, and the bounce off the lows may be the start of another run higher. The fund selling as of late has been relentless but is hopefully over for now. Much of this selling seems to have stemmed from recessionary fears, with some analysts even talking about an economic depression. Another thing that may have held wheat back today is the soaring U.S. Dollar Index, now above the 107 mark, and at the highest level since 2002. The rise in the U.S. dollar itself is tied to a poor economic outlook in Europe. On another slightly bearish note, Stats Canada is estimating all wheat acres at 25.4 million compared with 23.5 ma last year. Here at home, yesterday afternoon the USDA said the winter wheat crop was rated 31% good-to-excellent vs 30% last week. It is also reported to be 54% harvested, up from 41% last week. The spring wheat crop was rated 66% good-to-excellent vs (59% last week) adding to the bearishness seen today.

CATTLE HIGHLIGHTS: Cattle futures recovered on Wednesday after a round of technical selling to start the week. The anticipation of steady to firm cash markets helped move sellers back into the cattle markets. Aug live cattle closed 1.575 higher to 134.500, and Oct cattle added 1.475 to 139.950. Feeders saw good buying strength as well with Aug feeders gaining 0.600 to 173.300.

Cattle markets held support levels tested yesterday and early session on Wednesday to work higher. Price action was strong and closing to the top of the range can lead to additional buying support on Thursday. The cash market is still undeveloped as bids have stayed relatively quiet. Some bids are starting to develop, and the northern market looks to remain strong due to tighter cattle supplies. Early bids are steady to firmer than last week and have been passed on by producers. Cash trade will likely develop on Thursday and Friday for the week. With cash potentially higher, Aug futures were a value compared to cash after Tuesday’s weakness. The time frame after the 4th of July is typically a window of weaker demand. Retail values at midday were very strong, with Choice gaining 3.58 to 268.24 and Select 2.05 higher to 241.92. The load count was light at 67 midday loads. The demand concerns are in the face of reduced cattle numbers overall and lighter carcass weights. The forecast looks to turn temperatures hotter in the second half of July, and that could help support cash markets as weight gains may become difficult. The overall weakness in the grain market and the strength in live cattle helped support the feeder market. The grain market posted a more positive technical close on Wednesday and could lead to a recovery rally, which could impact feeder prices in the near term. The feeder cash market remains supportive in the countryside. The Feeder Cash Index was 0.26 softer to 165.05 and could be a limiting factor to the Aug feeder contract. Overall, the cattle market is continuing to consolidate, looking for a reason to move. The economic concerns and demand concerns will be limiting, but the overall light production will keep the market supported.

Hog prices gapped higher on the open on Wednesday, as the market saw short-covering and follow-through buying after Tuesday’s firm close. The front end of the hog market is optimistic for some demand boost as Germany has discovered African Swine Fever in part of its hog production region. This may lead to additional export restrictions, providing the U.S. exporters more opportunity. Chinese pork prices have been on the climb in recent sessions, and if U.S. pork values stay as a value, Chinese business could step in as a replacement. Pork carcass values were softer at midday, losing 3.06 to 111.42, following through on the weakness from Tuesday’s close. The post 4th of July window is typically a quieter demand window, and the retail values may be a limit to the market. Cash markets jumped higher on morning direct trade, as the weight average moved to 121.16 up 7.28 in the morning. The 5-day rolling average is currently 117.83. The Lean Hog Index was 0.12 softer to 110.58. The premium of the Jul futures to the index is a limiting factor with the Jul expiration looming on the 15th. Total hog slaughter last week was 2.286 million head, down 18,000 head from last week, and weekly pork production was 494.6 million pounds, down 1% from the previous week but still up 45 over last year, as slaughter pace and heavy carcass weight boost production. The hog market is pricing in some optimism. The cash market last week looked to be topping, but this week there has been good strength. The hog market is watching what may develop overseas and more potential U.S. demand.

DAIRY HIGHLIGHTS: Selling pressure in the Class III and IV milk trade was present again on Wednesday as contracts worked lower across the board. With the market breaking below technical support, selling pressure has intensified the past few days. There has also been a strong pullback in commodity prices as the dollar works its way up to new 20-year highs. A lot of money flow is moving out of commodities at this time. In today’s dairy spot trade, the market didn’t see much relief to push things back to positive. The cheese trade was up 0.125c on just 1 load traded while butter was unchanged on 16 loads traded. The bulls wanted to see buyers bid the market back up after the past few days of weakness, but that didn’t play out today. Powder was down 0.75c while whey was down a penny.