Soybean meal futures have been trading in a range bound pattern since early May. Considering soybean oil prices have crashed since reaching near contract highs in early June, meal has been stable. Good demand will underpin meal prices. End users should be on alert. The most critical weather for soybean production (and meal) will occur over the next 6 weeks. If conditions were to turn hot and dry, soymeal could rapidly become a sought-after contract by both hedges and speculators. Buyers should consider the use of forward selling or buying options. 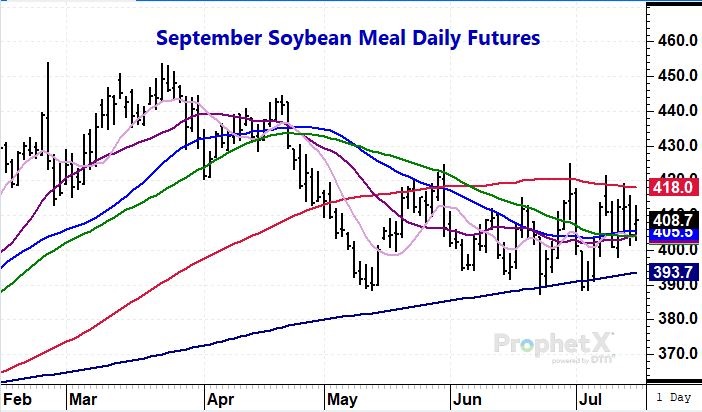 CORN HIGHLIGHTS: Corn futures firmed on the over-night as a warmer and drier forecast provided support, as did sharp gains in soybeans and wheat. The dollar was off for the second day in a row and crude oil gained near 4.00 lending additional support for corn prices. With increased offensive attacks by Russia against Ukraine, there is growing skepticism and agreement to ship grain will be signed this week. Yet, prices again struggled to hold onto early day strong gains. September futures closed at 6.12-1/4, up 8-0 cents on the day, but 11-1/4 cents off the daily high. December corn added 7 to end the session at 6.10-3/4.

Due to a late spring in parts of the Midwest, much of the crop is “bunched together” in the same growing and maturity window. The implication of course is concern that if weather is less than ideal, prices might quickly rally. Today might have been the legitimate start of this concern. Yet, timely rains and solid crop ratings have been keeping price rallies in check. Export inspections at 42.3 mb were supportive, bringing the year-to-date total to 1.980 bb, or 82.5% of expected sales of 2.4 bb. The key focus will be on weather for the next several weeks. If hot and dry were to persist, pollination could be impacted, as could ear filling. It is too early to jump to conclusions; however, a string of forecasts suggest temperatures will remain mostly above normal and rainfall below.

SOYBEAN HIGHLIGHTS: Soybean futures closed sharply higher with help from bean oil, crude oil, and a weather forecast with heat and dryness. Aug soybeans gained 31-1/4 cents to end the session at 14.97-1/4 and Nov was up 38 at 13.80-1/4.

A combination of factors had soybeans sharply higher to end the session, the first of which is the crude oil market. Around five dollars per barrel higher at the time of writing, there were no changes to oil production as a result of President Biden’s trip to Saudi Arabia. This helped to bolster the soy complex with Sep bean oil gaining 2.95 cents to close at 62.07 cents per pound; that is roughly a 4.99% increase from Friday’s close. Soybean oil was also helped by an 8.5% increase in palm oil, the largest increase in four months. Another issue facing the soybean market is the weather forecast which remains warm and dry. It appears like that weather pattern will hang around in the central and western parts of the Corn Belt into the first half of August. Recent concerns about inflation are also easing, despite the fact that CPI data recently came in higher than expected at 9.1%. There is some talk that with that number, inflation may have peaked and that longer-term, the Fed may not need to raise rates as much as thought. On a bearish note, China has not bought U.S. soybeans in 7 weeks and there is concern about their import demand – but today the market did not seem to care. In other news, weekly inspections were pegged at 13.3 mb with total 21/22 inspections now at 1.930 bb. The USDA has a final export estimate of 2.170 bb.

Wheat had strong gains in Chi, KC, and MPLS futures today. Paris milling futures also showed strength with increases of about 6-10 Euros per metric ton at the close. There was talk last week that Russia and Ukraine were close to an agreement in terms of a deal to allow Ukrainian grain exports. Recently, however, Russia bombed Ukraine’s capital and there is also talk that they are lighting wheat fields on fire. The latter is a rumor, but the point is that actions speak louder than words, and Russia’s actions appear to indicate that they will not come to an agreement. Looking at Europe, their weather is still mostly warm and dry, and they may be mostly sold out of wheat due to the lack of Black Sea exports. Another bit of help to the wheat market is the relief from the surge in the U.S. dollar. Now back around the 107 level, it remains historically high but is not as bad as the recent high over 109. The mostly hot and dry weather forecast also helped the market to rally with spring wheat still developing. Some rains expected in Canada are expected to be beneficial to their crop conditions though. In other news, today’s inspections data pegged wheat inspections at 6.8 mb with total 22/23 inspections now at 78 mb (and a USDA export forecast of 775 mb).

Live cattle showed their strength today as grains moved higher and brought feeders higher from their previous lows. Cash business has not yet been established with no reported asking prices listed, but today’s slaughter was 125k head, even with last week, but 9k head above a year ago. Friday’s slaughter was revised lower to end the week at 674k head. Funds were net buyers of live cattle last week and now hold a net long position of 21,900 contracts. In feeders, the funds kept their position mostly unchanged and are net short 4,000 contracts. Boxed beef was higher with choice up 1.58 at 270.49 and select up 0.31 at 242.10. Higher boxed beef and hopefully higher cash this week will support live cattle futures. Cash last week average at 137 in the South, which was steady, but 230 for northern dressed which was two dollars lower. October live cattle have been relatively rangebound the past 3 weeks trading either side of the 200-day moving average. August feeders bounced off resistance at the top of their Bollinger Band on Friday but are in an uptrend.

LEAN HOG HIGHLIGHTS: Hogs closed higher today with front month August leading the way as the pork cutout has provided the main support to futures. Aug gained 2.300 to 112.125 and Oct gained 1.775 to 94.375.

The pork cutout has been the biggest support to hog futures lately, showing the strength of demand. The cutout moved 3.67 higher on Friday afternoon and another 1.01 higher this morning to 123.19, with the pork cutout futures at a significant discount. Cash has been lagging and was down 3.70 as of this morning’s report, but prices should pick up into the week as the packer gets aggressive to replenish their inventory. August futures are moving closer to where July went off the board on Friday, and futures are still at a significant discount to cash. Friday’s CFTC report showed funds as buyers of hogs to the tune of around 9,853 contracts, increasing their net long position to 25,059 contracts. August hogs touched resistance at the top of their Bollinger Band today and are drifting into overbought territory but are still in an uptrend.

DAIRY HIGHLIGHTS: Class III futures are attempting to break a five-week losing streak as the August contract closed 13 cents higher at $20.29. This came amid a spot trade that saw the block/barrel average fall 4.00 cents to $1.9925/lb, closing under $2.00/lb for the first time since March 2nd. Friday’s Cold Storage report will give an update on inventory and that side of the equation has been trending bearish for a long time. Spot whey is failing to help as it has gotten comfortable underneath the $0.50/lb mark. That being said, some technical support could come into play with the second month testing $20.00 as the sharp recent downfall looks a little too hard, too fast.