The USDA July Cattle Inventory report will be released on Friday afternoon and is expected to show an ongoing tightening cattle supply.  Expectations are for total cattle inventory to be down 2.1% from last year to 98.683 million head.  This will be the lowest inventory since 2017 and keeping the trend lower for the 5th consecutive year.  The cattle supply has bee greatly affected by dry weather conditions, which has hurt pasture conditions and kept cattle slaughter pace running at a historically high level.  Secondly, the surge in grain prices has heavily weighed on input costs, bringing a halt to any possible expansion.  The beef cow herd is expected to be down 3% from last year.  This smaller overall beef herd size will continue to limit the calf crop sizes going into next year.  The cattle supplies are tightening, and given the current path, the trend looks to be maintain into the 2023 calf crop. 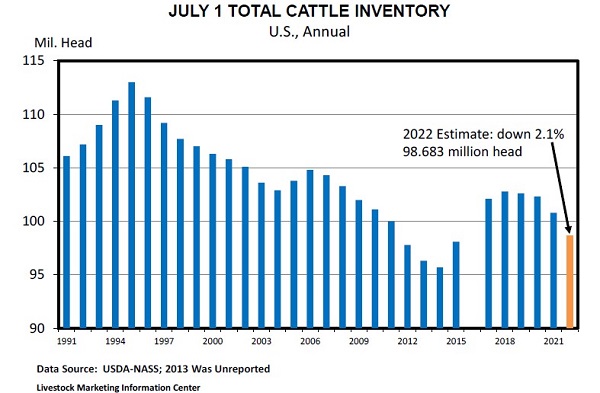 CORN HIGHLIGHTS: Corn futures struggled again with sharp losses in the early morning hours of more than 15 cents. A conducive weather forecast with increased rain chances and a cool down in temperatures had prices on the defensive. Poor export sales for old crop at 1.3 mb and weak energy prices also weighed on prices today. The trend, at best, is consolidating near term and now down for a month. December futures most recent peak was 7.49-3/4 on June 17. September corn closed at 5.75-3/4, down 15-1/2 and December gave up 16-1/2 as well to close at 5.73-1/2. Today was the lowest close since January for both contracts.

Today’s close would suggest bears are fully in charge. Expectations for signed agreement between Ukraine, Russia, Turkey and the United Nations was also viewed as a negative to the market and likely had fund selling pick up late in the session. The most recent weather forecast has the outlook generally beneficial for most of the Midwest, with a cool down in temperatures and above normal precipitation, nearly ideal for pollination. In the meantime, hot temperatures and dry conditions continue to persist in the West, which is frustrating farmers who are watching the market continue to drop. Not only is their crop in somewhat tough shape, but it could be in peril if rain isn’t had soon.

SOYBEAN HIGHLIGHTS: Soybean futures closed lower again today, as export sales were poor and crude oil was down as well. Improved weather has added bearish pressure to the market. Aug soybeans lost 30-1/2 cents to end the session at 14.18-1/2 and Nov lost 30-3/4 cents at 13.01-1/2.

Soybeans continued to fall as forecasts of improved rain and milder temperatures put pressure on the market, and poor export sales, along with lower crude oil, just added to the downward momentum. Export sales were 7.5 mb for 21/22, and 9.5 mb for 22/23. Last week’s export shipments of 18.4 mb were below the 29.8 mb needed each week to achieve the USDA’s export estimate, and soybean export shipments now total 1.946 bb in 21/22 and are down 10% from a year ago. August soybean oil lost 1.43 to 58.60, but biofuel margins are still positive, though they have narrowed with the break in diesel values. The 7-day forecast shows increased rain chances and milder temperatures, but the forecast returns to hot and dry in August, with the Climate Prediction Center expecting an expansion of drought into the central Midwest, just as the crop is at a vulnerable state setting pods. November soybeans have support at the bottom of their Bollinger Band around 12.80, and apparent new resistance at the 200-day moving average, which is at 13.81. Prices may continue to fall from this point unless weather conditions start to damage the crop or exports pick up.

Wheat struggled again to hold onto any gains today. The concerns about the US economy have not subsided and the non-commercials have been liquidating long positions to the point where they should not have a drastic influence on prices, yet here we are. Fundamentally, global wheat supplies remain tight and are anticipated to drop to the lowest level in 15 years in 22/23. This is supportive, but the bears seem to be winning the fight lately, as the markets fight an uphill battle. Lower corn and soybean prices were also unhelpful again today. In terms of headlines, news outlets earlier in the week had indicated that the deal to allow Ukrainian grain exports would be signed this week, but nothing has surfaced yet. There is still tomorrow, but Russia is reportedly turning their war machine towards the port city of Odessa as their attacks continue. Here at home, the USDA data today showed 18.8 mb of wheat export sales and the Philippines were the number one buyer. Egypt also bought wheat recently, but none from the US.

CATTLE HIGHLIGHTS: Cattle markets saw choppy trade on Thursday as the market consolidated before the release of the USDA Cattle Inventory and July Cattle on Feed report on Friday. Aug live cattle closed 0.025 lower to 135.725, and Oct slipped .350 to 140.975. Aug feeders gained .450 to 178.275.

Overall price action was very quiet on Thursday, with no one willing to push the market one way or another before the reports on Friday.  Live cattle stayed range bound, in the middle of its current range, and feeder cattle consolidated at the top of its most recent move.  Both reports should still reflect a tightening cattle supply.  For cattle inventory, all cattle and calves are expected to be down 2.1% from last July.  Beef cow inventory down 3% from last year.  The Cattle on Feed report is expected to show total cattle on feed at 100.1% of last year, placements  at 94.7%, and marketings at 102% of last year.  The placement number will be closely watched.  Placement may still run strong given the drought conditions forcing cattle into lots sooner.  Cash trade was still light on Thursday, with some additional trade.  Southern cash deals are ranging $136-137, and northern dressed trade at $227, both softer than last week.  It is looking like the bulk of business may be essentially done for the week, although a little cleanup this afternoon and tomorrow is not out of the question.  Beef cutouts at midday were lower with choice at 268.51, losing 2.02 and select at 240.47, dropping 1.78, with light to moderate box movement at 53 loads.  Weekly export sales were improved with new net sales of 23,800 MT for 2022, up noticeably from the previous week and up 97% from the prior 4-week average. South Korea, Japan and China were the top buyers of U.S. beef last week. Feeder cattle finished firmer, supported by the weakness in the grain markets. August feeders are trading a premium to the Feeder Cash Index, which was .08 lower to 172.42, and could limit the front-end feeders.  Live cattle are still range bound and may need the cash market to provide the direction to go higher.  The trade will likely stay choppy into the end of the week to see the USDA numbers.

LEAN HOG HIGHLIGHTS: Lean hog futures saw profit taking, pressured by the overall market weakness, except for the Aug contract, which is trying to keep up with the strong cash market.  Aug gained 1.425 to 116.300 and Oct slipped .250 to 95.775.

The strong cash market tone and premium of the index to the August contract keeps the buying in the front month, as prices gapped higher to start the session for the second consecutive day.  October futures faded off early session highs, as prices consolidated at the top of yesterday’s trade.  The strong price action in the August contract will keep the buyers active in the market on Friday. Retail values and demand are overall strong, as retail pork values are at their highest prices since last August.  Pork retail values were higher at midday, gaining 2.20 to 126.57. Movement was moderate at 148 loads. Weekly export sales reported new net sales of 20,600 MT for 2022, up 13% from the previous week, but down 23% from the prior 4-week average. Top buyers of pork last week were Mexico, Japan, and China. Cash markets were softer on Thursday, with morning direct trade slipping 2.27 lower to 121.04 and a 5-day rolling average of 119.59.  The Lean Hog Index is trending higher, reflecting the cash market tone.  The index gained .46 to 116.46.  The strong move in August futures has closed the gap to the Cash Index. The spread between August and October hogs has widened to 20.950, which should help pull the Oct futures higher, given the cash market.  The fundamentals in the cash and retail market are strong and keeping the buying strength in the hog market.  Prices saw some softness in the market on Thursday, influenced by the outside markets.

DAIRY HIGHLIGHTS: Class III was lower today in a continuation of the recent downward trend as second month milk in August gave up 33 cents. Both cheese and whey were actively traded but gave up value with cheese down 7.75 cents to finish at $1.935/lb. and whey down 2.25 cents for a settlement of $0.455/lb. Class IV was slightly mixed as July was unchanged, August and October finished down 0.06 and 0.01, and September and November closed higher at 0.12 and 0.02, respectively. Class IV’s limited strength was likely found on a good day for the spot butter and powder trade, up 1 cent and 2.75 cents. After the release of this afternoon’s June Milk Production report, the markets have added to losses after overall production was 0.2% higher YoY.