Class III milk futures are falling with selling pressure just like a lot of the different commodity markets.  The August Class III milk price has dropped nearly $5.00 CWT since posting its high of $25.13 on June 9.  Milk prices were trading a range from $25.00 on top to $23.00 on the lower end from February to July.  When prices finally broke through the bottom of the range, selling pressure was consistent as prices tumbled.  Beyond the weak technical picture, concerns regarding demand have weighed on dairy product prices, especially cheese values.  The weaker cheese market has a direct correlation to the prices in Class III milk.  That demand has been affected by the tighter consumer spending in the face of inflation, COVID restrictions in China, and strong value of the U.S. dollar.  The lack of demand has out-paced the tighter supplies as high production costs have tightened dairy production.  The current trend is lower in the milk market, but prices may be trying to find some footing near the $20.00 level. 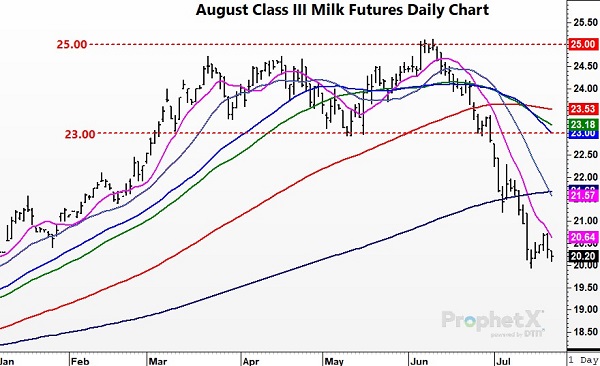 CORN HIGHLIGHTS: Corn futures continued their slide and the day and week softer. After double digit loses yesterday, futures tried a comeback at mid-session only to fail and finish lower for the fourth day in a row. A negative technical picture, a good weather forecast and value declines in competing commodities is keeping prices on the defensive. Wheat dropped well more than 40 cents, adding weakness to corn. September futures lost 11-1/2 cents, finishing the day at 5.64-1/4. For the week, September lost 40 cents. December futures gave up 9-1/4 for the session, closing at 5.64-1/4 and lost 39-1/2 from last week.

SUMMARY: A few weeks back we argued it’s all weather moving forward, and while conditions have been less than ideal is parts of the Corn Belt, most producers have received beneficial rainfall and temperatures, while above normal have moderated enough, as have forecasts.  Consequently, good weather has been a negative for price, but so have outside influences, which is leading to a further price collapse. Export sales suggest importers have mostly moved to the sidelines waiting for a better sign of a bottom. Though the dollar was about 1% lower on the week, softer energy was likely equally negative. Bottom line –  what news there was, was either negative or interpreted as such. Oversold conditions, as well as a significant price drop the last 30 days, might suggest a low is close, yet no technical signal the low is in place. Stay defensive for now.

Soybeans bounced off fresh lows from the overnight trade to finally close higher after days of sell-off. The biggest bullish factor today was the weather forecast, which has shown more confirmation of extreme heat and dryness to come. The Climate Prediction Center expects drought conditions to expand throughout the central Corn Belt from July through October. In addition, Thursday’s US Drought Monitor showed class 1 degradation in the southern Plains and southern Minnesota. The heat and dryness forecast through the month of August, when soybeans are at their most critical stage, is concerning, but bullish for prices. Soybean oil managed to close higher today, as September palm oil gained, but crude oil was lower again. Based on Friday’s August futures price, the crush premium increased to an extra 2.90 of value created from processing one bushel of soybeans, which should create incentive for processors to buy cash beans. September soybeans on the Dalian exchange were down 1% today at the equivalent of $18.50 a bushel, as Covid restrictions continue to harm the Chinese economy. Support for November beans is near 12.72 at the bottom of the Bollinger Band, while the target at the 200-day moving average is at 13.81.

All three US wheat classes had a rough close with steep losses. Paris milling wheat futures really struggled as well with a loss of 25 Euros per metric ton in the September front month. Looking at the Chicago weekly settlement offers some relief. The 17-3/4 lower close on the week isn’t great, but given the way the market has been acting could have been a lot worse. At one point in the day, wheat eked into positive territory, but could not hold onto those gains as news surfaced of a deal being signed between Russia and Ukraine to allow for grain exports to take place. The agreement was reportedly signed around 8:30 AM CST, but it was difficult to find confirmation at that time (news outlets have since confirmed that a deal was signed). According to the Wall Street Journal, Ukraine has a goal to ship up to 5 mmt of grain per month. The signing of the agreement is bearish to wheat prices, but there remains question as to whether Putin will respect the terms of the deal. Recall that he also said he wasn’t going to invade in the first place. There are also reports of Russian combines entering Ukraine to effectively steal their wheat. In other news, next week, the Wheat Quality Council’s spring wheat tour will take place in Minnesota and North Dakota.

The cattle market closed at their highest levels in weeks as the market was looking for confirmation of an overall tighter cattle supply picture.  For cattle inventory,  all cattle and calves in the United States on July 1, 2022 totaled 98.8 million head, or 2% below the 101 million head last year.  All cows and heifers that have calved totaled 39.8 million head, 2% below the 40.6 million head on July 1, 2021.  Beef cows, at 30.4 million head, down 2% from a year ago.  The 2022 calf crop in the United States is expected to be 34.6 million head, down 1% from last year.   Beef cows and calf crop numbers were slightly above expectation, but still reflect on overall lower cattle supply trend.  The Cattle on Feed report showed that cattle and calves in feedlots at 11.3 million head on July 1, was slightly higher than last year’s numbers, and in line with expectations.  Placements in feedlots during June totaled 1.63 million head, 2% below 2021. Net placements were 1.56 million head, slightly above expectations, but within the analyst range.  The large placements are reflective of difficult pasture conditions pulling cattle forward, and by adding heifers into the lot, as compared to the cow herd. Marketings of fed cattle during June totaled 2.06 million head, 2% above 2021 and in line with expectation.  Overall, both reports were close to expectations, and reflective of the current cattle numbers in the industry. Cash trade was down for the week, and northern dressed deals have been reported at mostly $227, $2 lower than last week. Southern live business has been marked at mostly $136, roughly $0.50 lower.  At midday, beef cutouts were firmer with choice at 268.21, adding .45 and select at 242.44, higher by 1.91, with light to moderate box movement at 53 loads. Feeder cattle finished strongly higher, supported by the weakness in the grain markets. August feeders are trading at a premium to the Feeder Cash Index, which was .34 higher to 171.01 and was down 1.61 on the week, which could limit the front-end feeders.  The cattle market saw good buying strength into the USDA reports on Friday, and those reports were relatively in line with expectation.  the trend is still lower in cattle numbers, and with the big heifer placement totals, expansion of the beef herd is still not taking place.

LEAN HOG HIGHLIGHTS: Lean hog futures were mostly higher to end the week, led by the August futures, which were sharply higher as the front month contract tries to keep pace with the cash market.   Aug gained 2.400 to 118.700 and Oct added .550 to 96.325. For the week, August hogs strong buying gaining 8.875, while Oct was 3.725 higher.

The strong cash market tone helped propel the August futures to its highest close since April, as prices have gapped higher 3 out the past 4 days, cashing the premium in the cash market.  The front-end strength has helped lift the October futures through key resistance as the spread between August and October hogs has grown to $22.275. Cash markets were softer on Friday, with morning direct trade slipping 3.05 lower to 117.99 and a 5-day rolling average of 119.82.  The Lean Hog Index is trending higher, reflecting the cash market tone.  The index gained .67 to 117.04 on Friday and was up 3.65 for the week. The strong move in August futures has pushed the futures to a premium over the Cash Index, which could start being a limiting factor. Retail values have been the other side of the strength, as demand has stayed strong overall. Pork retail values were higher at midday, gaining 3.02 to 126.92. Movement was moderate at 153 loads. Retail values are trading at their highest levels since last August and have trended higher throughout the week.  The strong demand tone will likely keep packers bidding for a tightening hog supply picture.  Estimated slaughter for Friday was 435,000 head.  For the week, estimated kill was 2.244 million head, which is 50,000 head less than last year.  The fundamentals in the cash and retail market are strong and keeping the buying strength in the hog market.  The current path is still higher as the market is looking for a near-term top.

DAIRY HIGHLIGHTS: Dairy futures were pressured lower this week from a softer spot market in addition to a variety of bearish news items. To start, this week’s Global Dairy Trade auction fell 5% lower as global prices remain under pressure. In the auction, GDT cheese fell 2%, butter fell 2.10%, skim milk powder fell 8.60%, and whole milk powder fell 5.10%. Global prices have been in a steady downfall since the March highs. On Thursday the USDA said that June milk production was up 0.20% on a year-over-year basis despite a 78,000 head reduction in milk cow numbers. Finally, Friday’s Cold Storage report showed that US cheese in inventory for June rose 5% from the same month last year. At week’s end, August 2022 Class III settled at $20.23 while August Class IV settled at $24.47.