Brazil soybean planting will start in about a month, and the USDA is predicting record production for next year.  The USDA is forecasting next year’s soybean crop to reach 149 MMT, but other more aggressive analysts are targeting production to push well past the 150+MMT levels.  These totals would be a record as the two largest soybean crops ever recorded 128.5 MMT and 139.5 MMT in 2019-20 and 2020-21, respectively.  This is also compared to last year’s drought tightened crop at 126 MMT.  The projection for a return to trendline yields, and a jump in acreage are supporting the hefty targets.  If that projected acre number is achieved, Brazil has added an additional 20% to their soybean acreage in the past five years, or the equivilant of the combined area of Illinois and Indiana.  Weather will still be a major factor in this upcoming crop, but these are large projections that if realized will limit the strength in soybean prices globally. 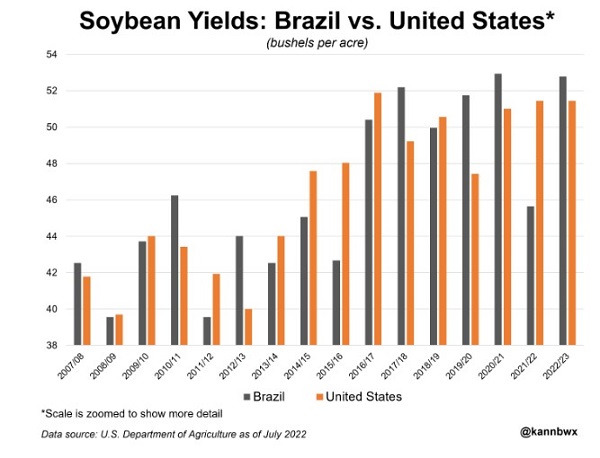 CORN HIGHLIGHTS: Corn rallied into the close and closed positive after being down throughout the day following continued heat and dryness in the western Corn Belt. September gained 1/4 cent to close at 5.91-1/2 and December gained 2 cents to end the session at 5.96-1/4.

Futures were higher at the start of the day before fading and then gaining into the close. This move comes after Stone X reduced their estimates for the corn yield to 176 bpa, below the USDA’s estimate of 177 bpa, while other private analysts predict as low a yield as 174 bpa. The first ship carrying Ukrainian corn is safely moving to Lebanon after an inspection in Turkey, and officials say that no more than three vessels will be allowed through per day. Ukrainian officials have said that there are 17 vessels already loaded and waiting to ship, most of which have been sitting with the grain on board for months. Weather continues to be a mixed bag for markets as the eastern Corn Belt’s forecasts have significantly improved, while the western Corn Belt is seeing no relief from hot and dry conditions in the immediate future. Next week, all attention will be on the USDA’s WASDE report, in which traders will see what changes, if any, are made to yields. Demand has been poor with little export business, but ethanol production continues to keep up at a fast pace. The US Energy Department said last week’s ethanol production increased from 1.021 million barrels per day to 1.034 bpd, slightly below the USDA’s estimated pace with three weeks left in the season. Dec corn has a gap on the chart at 5.84-1/4, which should be watched.

SOYBEAN HIGHLIGHTS: Soybean futures could not hold onto gains today. A combination of weather and concerns about China put the market into a defensive state. Aug soybeans lost 11-1/4 cents to end the session at 15.58, and Nov fell 16-3/4 to 13.69-3/4.

The soybean trade remains volatile as beans have given up roughly half of last week’s rally. The change in the weather forecast from hot and dry to chances of rain over the next seven days in central and eastern areas of the Midwest has pressured the market. As pods fill in August, this rain, where it occurs, will be very beneficial to the crop. However, weather is not the only factor affecting the market right now. Nancy Pelosi’s visit to Taiwan has angered China as she vocalized support for the Taiwanese democracy. While China’s purchases of US soybeans have been slow lately, they will likely need US beans down the road. The concern is that conflict or rising tensions between the two countries could greatly affect trade of goods and commodities and this has traders nervous. China has apparently already suspended imports of certain products from Taiwan. Also weighing on the soybean market today were lower soymeal, soyoil, and crude oil. Bean processers are still incentivized by good crush margins however, and looking down the road, increased biofuel demand may provide support to the market. In other news, the USDA reported today a sale of 135,000 mt of soybean meal to Poland for 22/23.

So far, only one vessel carrying corn, the Razoni, has left Ukraine. It passed inspection in Turkey and is on its way to Lebanon. There is still conflicting information as to how much will actually be exported from the region though. One Ukrainian official stated he expects no more than five ships to leave Ukraine in the next two weeks. However, Turkey said that as many as three vessels per day will be allowed to leave port. Additionally, Russia is apparently accusing the US of helping Ukraine in the war, which could further escalate conflict. On that thought, conflict in Asia is also on the minds of traders. China has reportedly suspended the imports of some fish and fruit products from Taiwan following Pelosi’s visit. The market may be a bit on edge with concern that China could also suspend imports of US goods an commodities. Here at home, storms across South Dakota and Minnesota brought much needed rain. With the spring wheat crop rated 70% good to excellent, it is looking much better than a year ago.

October cattle futures broke out of its most recent trading range and posted a new near-term high and closed at its highest level since May 5.  The October contract needs some follow-through on Thursday and could be looking to challenge the $145 price level or higher.  Cash trade was slow to develop again on Wednesday afternoon, but reported cash cattle trade in the $135-$138 range in the southern areas and $143-$147 in the northern market.  This was trading mostly steady to higher with last week’s totals supporting the market.  Retail values at midday were mixed as choice carcasses added .29 to 268.75 and select was 0.05 lower to 241.03. The load count light at 64 midday loads. The choice/select spread has begun to widen, trading to $27.25 difference between the two.  This reflects the tightness of the beef lots and packers bidding up to find choice beef product to meet the demand. The spread is challenging the highs for the year, which was $28.84 back on July 19th.  Feeder cattle rebounded and saw good gains supported by the strong live cattle market and an overall weaker grain tone for most of the day.  The Feeder Cattle Index stays softened, losing .36 to 174.04 and is still at a discount to the August futures. The price move in cattle on Wednesday was impressive, but the key will be follow-through into the end of the week.  The technical picture looks supportive of higher prices, and the steady climb in deferred futures shows the strength and anticipation of a tighter cattle supply in the future for this market.

The most actively traded October futures are still in an uptrend, but momentum may be slowing. Prices are still well supported, as long as the cash and retail market stay strong.  The large spread between August to October hogs continues to grow, moving to 25.250 gap between the two.  This abnormally wide spread has the deferred contracts looking undervalued compared to the front month and the strength in the cash market.  August futures expire on the 12th.  The strong cash market tone is the fuel in the market for the August contract. Midday direct hogs on Wednesday jumped higher, gaining 13.69 to 129.32 and the 5-day rolling average trended higher to 124.72. The Lean Hog Cash Index still trends higher, but was softer on Wednesday, slipping .30 to 121.57.  With August expiration soon, the index is tied to the August futures.  The retail market is trading at its highest levels for the year, and at midday, pork carcasses were softer, slipping 1.26 to 129.76. The load count was moderate at 129 loads. USDA will release weekly export sales on Thursday morning, and those numbers could help provide direction for the trade on the day. The cash market and retail demand are still the underlying support in the market, as the market is trending higher overall, and the wide spread between August and October reflects a discrepancy.  The light supplies are expected to continue into the end of the year even though hog numbers are growing in general.

DAIRY HIGHLIGHTS: Spot cheese fell 6.625 cents today to a new low for the move at $1.82/lb, adding to a weak morning trade for Class III futures as the second month September contract closed down 50 cents to $19.90. This is the lowest that second month chart has closed since January 27 and a weekly close beneath the $20.00 mark opens up the downside for another leg lower. Within the Class IV trade, the roll to September as the second month drops that chart down to $23.81 at today’s close, which falls in line with both the 2014 high (the previous all-time high on the second month chart before this year) and where prices found support in early May before pushing above $26.00. Spot butter did push to a new 2022 high of $3.06/lb as that market refuses to quit.