Concerns regarding Chinese soybean demand are still weighing on the soybean market.  Recently released import data showed that China took a shipment of 7.88 MMT of soybeans in the month of July.  This total was down 9% from last year and well below recent averages.  The reason for the sluggish demand has been tied to the high prices for soybeans globally, COVID lock downs and poor crush margins in China have helped curb imports.  Total for the year from Jan-Jul are down a total of 6% from last year’s record for Chinese soybean imports.  The soybean market is optimistic for demand to pick up going into the second half of the year as purchases of new crop soybeans from the U.S. destined to China are sitting at the highest levels since 2012, including an announced sale of soybeans for the 2022-23 marketing year this morning. 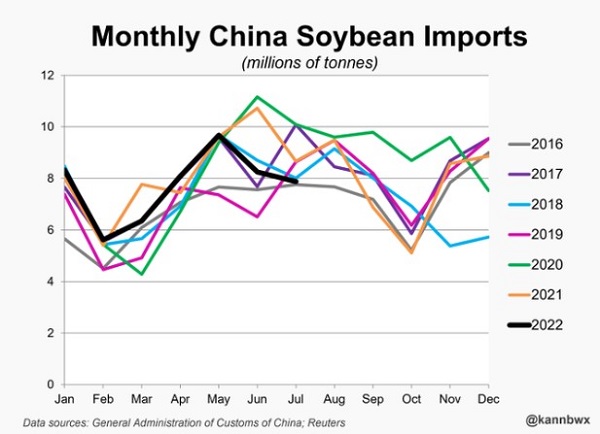 Corn futures are trading at the same level they were a month ago. In other words, despite higher and lower values over the last 30 days, prices have basically gone nowhere. It is likely both bulls and bears are positioned where they currently want to be and in front of Friday’s USDA Supply and Demand report. Both have valid arguments with the nod going to the bears as recent rains were beneficial to many. Yet, it is expected that crop ratings will confirm 13 to 15% of the crop as poor to very poor. Given time of year, these acres will likely not show improvement, therefore, bulls will argue a 177 yield is too generous. Basis has remained firm, also confirming tight old crop supplies. Bears will argue the crop this week (with weekend rains in key areas) is in better shape than a week ago. Without big export numbers, there is little to give prices a boost. Both have arguments. Our bias is the crop is about a week behind and if weather is conducive, a drop to near 5.50 is likely. If weather is not conducive, expect a low is in and the market may be positioned for a longer-term upward price advance.

SOYBEAN HIGHLIGHTS: Soybean futures traded both sides of neutral, but sank mostly lower by the close. The market is still trying to find direction; a new purchase by China is supportive, but rains on the radar are pressuring the market. Sep gained 3/4 of a cent to end the session at 14.64 and Nov was down 8-3/4 cents to 14.00.

It was a relatively quiet day for soybeans, with a relatively disappointing close. This market has been in a trading range (albeit a large one) and has been struggling to break out. Long term, the new energy bill should help green fuels, soybean oil included, and this should support the bean market. On a bearish note, there were recent rains in parts of Minnesota, Iowa, Wisconsin, and Illinois, which should help the crop as pods begin to fill. However, on the bullish side of things, private exporters reported sales of 132,000 mt of soybeans for delivery to China during the 22/23 marketing year. There was concern following the Taiwan situation that China would limit US purchases, but some of those fears have eased. There is always two sides to the coin though, as China hog futures are at a one-month low, which could pressure soybeans. There are also rumors of China buying Brazilian soybeans for August-September. As a reminder, the next WASDE report will be released on Friday – the USDA has the potential to change soybean acreage after re-surveying the Dakotas and Minnesota.

The mixed close in the wheat market today was a bit disappointing, but not totally unexpected. With three more vessels having left Ukraine on Friday, grain is not moving out of the region at record levels, but it is moving. This is symbolic in nature and adds a bearish tone to the marketplace. Also adding to the bearish tone are reports that IKAR (a Russian consulting firm) raised their estimate of Russia’s wheat crop to 95 mmt. This compares to the USDA at 81.5 mmt, but there is some question about IKAR’s estimate because on Friday, Russia’s ag minister actually lowered their wheat crop. However, that is not the only news coming out of that part of the world. There has apparently been bombing near Europe’s largest nuclear facility in southeastern Ukraine; the worry is that if there is damage to the reactor(s), it could be a disaster akin to Chernobyl. In addition, crops in the region could potentially be contaminated with radiation. Also on the minds of traders will be this week’s WASDE report, which may show an increased wheat crop estimate for Russia.

CATTLE HIGHLIGHTS: Live cattle futures had modest gains to start the week in anticipation of a firmer cash market trade this week and spill over strength from a strong move higher in feeder cattle markets. Aug live cattle closed 0.475 higher to 138.350, and Oct gained 0.350 to 144.225. Feeders posted strong triple digit gains, with August adding 1.750 to 18.275 and September led the market higher gaining 2.225 to 185.650.

October cattle saw buying support, pushing prices, it’s the highest levels since May, and cleared resistance from the June highs, as money flow supports the live cattle market.  The strong tone may have Oct cattle look toward the large price gap on the charts from April 22 and the top of that gap at 145.975. Cash trade is undeveloped for the week, but expectations are for cash to trade steady to firmer. Today’s estimated slaughter totaled 119,000 head, 5,000 head below last week, but 6,000 greater than a year ago. The tighter cattle supply and the search for quality has packers staying active in the cash market. The choice/select spread helps measure that quality demand.  The spread is still trading at a wide $26.59 difference between the two. This reflects the tightness of the beef lots and packers bidding up to find choice beef product to meet the demand.  Retail values at midday were higher as choice carcasses gained 1.79 to 266.41 and select was 1.15 higher to 239.82. The load count was light at 50 midday loads. Feeder cattle pushed strongly higher on technical buying and a soft tone in the grain markets.  The Sep feeder futures are likely targeting the contract highs from Feb at 188.825.  The Feeder Cattle Index slipped to .12 to 175.31 and is still at a discount to the August futures. The price moves in cattle this week reflects the support in the market given the tighter supply picture, stronger cash tone, and a firm retail demand. The cattle market has been looking at a tight supply picture for months, and prices are finally starting to be more aware of the situation as demand has stayed supportive overall.

LEAN HOG HIGHLIGHTS: Hog futures resumed their climb to start the week as strong cash and retail tone support the market overall.  Front month August hogs stayed tied to the cash index with expiration around the corner on the 12th, and October looks undervalued to the Aug board.  Aug hogs gained 0.9.75 to 121.800, and Oct led the market higher gaining 1.900 to 100.300.

The most actively traded October contract has closed higher the past three sessions and closed above the $100 level on Monday.  Today’s close at $110.300 established a new contract high close, and in shooting distance of the contract high.  Oct hogs have surged higher, gaining over $7.00 since last Thursday’s weak open. The large spread between the August and October contracts shows some correction, but the spread is still wide at 21.550 on the close. August futures expire on the 12th, and October still looks undervalued, given that spread. The strong cash market tone is the fuel for the front of the market. Midday direct hogs on Monday were softer, losing .79 to 122.88 and the 5-day rolling average at 126.09. The Lean Hog Cash Index was stronger, gaining .48 to 122.09. With August expiration on Friday, the August futures are tied to the index and trading at a small discount. The retail market saw midday pork carcasses were strong gaining 3.95 to 128.98. The load count was moderate at 145 loads. If that value holds into the close, this will establish a new high for the year on pork carcass value. The hog market is strong and money flow supports the market as the fundamentals are strong.  The hog market is moving into over-bought territory, and could be due for a correction, but in the short-term, price still have room to work higher.

DAIRY HIGHLIGHTS: The Class IV market remained under pressure with a terrible start to the week as the September contract dropped 77 cents to $22.60, nearing the point where the second month chart began 2022. Spot butter once again dropped back under $3.00/lb, which makes four such occurrences in the last two months, closing today at $2.9750/lb. The Class III trade showed some more optimism as the September contract closed up a dime at $19.40, 35 cents off the daily low as buyers seemed to defend the $19.00 mark. The spot trade for Class III was quiet with cheese up slightly and whey unchanged.