The strong sold wheat market could be starting to build a bottom.  Wheat futures have tumbled off their high after the surge in prices this spring following the Russian invasion of the Ukraine.  Since that time window, demand concerns, strong U.S dollar, the talk of Ukraine exports starting, and technical selling have driven prices well off their highs.  Recently, the downside has begun to level out, and the charts for wheat futures are looking to build a “rounded” bottom.  Prices have been consolidating in a sideway fashion over the past few weeks overall and may be starting to turn higher.  The move higher will be a process and could take time, but if a turn is in front of the market.  Over time, prices could slowly trend higher.  This will still take some fundamental support, whether a softening U.S. dollar, weather concerns for fall and spring planting, or a pick up in demand to help rotate the depressed prices higher into the winter months. 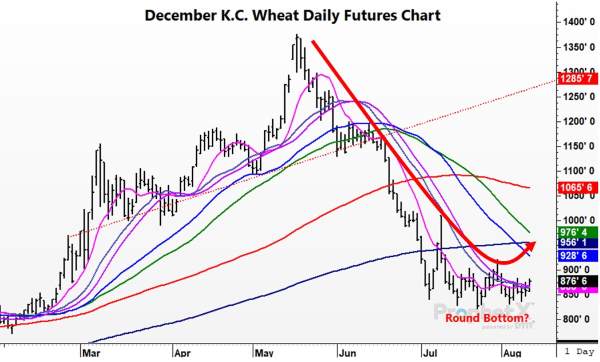 CORN HIGHLIGHTS: Corn futures edged higher today gaining 5-3/4 cents in September, closing at 6.21-3/4 and added 4-1/2 cents to December to end the session at 6.18-1/2. Bulls will argue another positive close, yet bears will again point to prices finishing well off the daily highs. September reached 6.32-1/2 and Dec 6.28 for their daily high values. Good, but not great, may be the term to describe DTN’s Digital Yield Tour with estimates in Illinois at 196.9 bpa, Indiana 180.9, and Ohio at 178.9. While good, these numbers are not likely strong enough to suggest the current USDA yield estimate at 177 bpa will hold. The average pre-report estimate is 175.8. The U.S. dollar trading at it’s lowest level since late June was supportive.

Friday will provide the market with more data as the monthly WASDE report will estimate yield, production, and changes to demand and carryout. The carryout figure is potentially the most important as if encompasses all line items. The average pre-report estimate for carryout is 1.506 bb for the 2021/2022 crop and 1.395 for the 2022/2023 marketing year. (Crop harvested in 2022 and utilized through the end of August 2023). A changing forecast by mid-day calling for cooler and wetter in the western Corn Belt may be responsible for prices sliding from their high earlier in the morning session. Soybeans had experienced sharp gains by mid-morning, only to finish 1 cent lower on the November contract, 27 cents from their daily high. Another component of today’s trade may have been prices reaching levels to encourage farmer selling and speculators taking gains prior to Friday’s report. The idea of big changes to crop size from this point is losing traction. In other words, what the crop is going to be is well determined, yet weather is still important.

SOYBEAN HIGHLIGHTS: Soybean futures started the day off on a strong note, with August scoring new contract highs along with August meal, but both began to slide at 11am and ended up closing lower. Inversely, bean oil began to rally around 10am. Aug soybeans lost 4-1/2 cents to end the session at 16.88-3/4, and Nov lost 1 cent to 14.27-3/4.

The entire soy complex was significantly higher earlier in the day, boosted by the report of a sale to China by private exporters and declining CPI data, but around 11am new weather forecasts were released calling for cooler and wetter weather in crop-growing areas next week. Following the updated weather forecast, soybeans and soybean meal began to fall, while soybean oil worked its way higher. There are increased rainfall chances in many states that have been suffering from drought conditions, including Nebraska and Iowa. Apart from weather, trade is still paying attention to the downgrade in crop conditions, as well as Friday’s USDA report where they will likely reduce yields, but the question remains as to how much. Last month’s report had yields pegged at 51.4 bpa with the average trade estimate now at 51.1, but some analysts estimating as low as 49.9 bpa. Private exporters Private exporters reported another sale of 196,000 mt of soybeans for delivery to China during the 22/23 marketing year even as tensions over Taiwan loom. Demand is strong for soybean meal and the crush value reflects product values at 2.76 above soybean futures, which should support nearby soybeans with processors incentivized to buy cash beans. Sep soybeans closed a chart gap left on June 16 before falling back down to close above the 100-day moving average. Nov beans closed just below resistance at the 50-day moving average after briefly breaking through it.

Wheat had a good day and held together into the close, despite the fact that soybeans did the opposite and fell apart by the end of the session. Traders are likely positioning themselves ahead of Friday’s WASDE report. On Friday, the USDA has the potential to make changes to spring wheat plantings based on resurveying North Dakota, South Dakota, and Minnesota. Currently, the 11.1 million acre spring wheat planting estimate is close to the lowest level in 50 years. While the war rages on, the UN has stated that they “expect a big uptick” in applications for Ukraine grain shipments. So far, along with some barley and sunflower products, about 412,000 mt of wheat has left Ukraine. Most of what has been exported has been corn though, said to be about 1.1 mmt. From a technical point of view, wheat is still well into oversold territory when looking long term charts. Today, the market also received CPI data, which came in at 8.5% vs 9.1% in June. This may have helped both financial markets and commodities today with the thought that inflation may be declining (at least a little bit). With the potential for big moves on Friday, volatility is expected to remain high.

October cattle tested the 10-day moving average under the price at $143.200, before the buyers stepped in and lifted price to a new near-term high close. With good money flow, October cattle are looking to the gap on the charts are 145.100 and a possible test of the contract high.  The tight cattle number forecast keeps the market supported if the demand can stay consistent. Today’s slaughter totaled 126,000 head, 2,000 more than last week, and 10,000 greater than a year ago. Cash trade started to develop on Wednesday with light trade is being reported in the North with dressed deals marked at $229,  and cash deals $145-146, roughly $2 higher than last week. Southern trade has been slow to develop, but asking prices are firm at $138-140. The tighter cattle supply and the search for quality has packers staying active in the cash market. Retail values at midday were softer as choice carcasses slipped 1.29 to 263.44 and select was .88 lower to 236.82 The load count was light at 72 midday loads. The choice/select spread is still trading at a wide $26.62 at midday.  Feeder cattle pushed sharply higher, supported by the strength in the live cattle markets.  Cash feeder prices in the countryside remain strong as producers struggle to secure cattle. The Feeder Cattle Index added .13 to 176.53. and is trading at its highest points since February 2015.  The trade on Tuesday was an anomaly as the cattle market was set for some profit taking.  The overall market is still trending higher, and fundamentals stay supportive. The strong cash tone helped bring that money back into the cattle market on Thursday, trying to secure supplies in a tightening supply market.  Open interest is growing and there is still room for money to flow into the cattle market.

LEAN HOG HIGHLIGHTS: Hog futures saw buying support on Wednesday as the discount of October to the cash market helped support the hog futures. Front month August hogs stayed tied to the cash index with expiration on the 12th. Aug hogs gained 0.050 to 122.250, and Oct led the market higher, gaining 1.250 to 100.850.

The October futures saw good buying support as the contract established a new contract high and high close on the trading session. The large spread between the August and October contracts is still wide at 21.275 on the close, and still look to be supportive of the October futures. News of Chinese inflation data helped support the hog market in general as pork prices jumped 20% higher in the month of July in China.  With a tighter supply of hogs here in the U.S., the market may be expecting some additional Chinese demand to help cool the strong pork prices domestically.  Weekly exports sales will be announced on Thursday morning before the market open.  Last week, China added new purchases of 16,800MT of U.S. pork, and the market will be watching to see if that trend can continue. The Lean Hog Cash Index was slightly higher, gaining .33 to 122.25. With August expiration on Friday, the August futures are tied to the index. October is at a strong discount, trading 21.400 under the index.  Midday direct hogs jumped higher on Wednesday, gaining 11.76 to 130.35 and the 5-day rolling average at 126.05. The retail market saw midday pork carcasses slightly lower, down .05 to 123.80. The load count was strong for midday at 210 loads. Retail values established a new high for the year recently, but have begun to roll over, typical of the post-Labor Day retail market, but some increase in export demand could help support those prices. The hog market is strong and money flow supports the market.   The retail values have started to roll over, so demand will be key as hog numbers are still less than anticipated, and packer are still looking for product.  Still in the short term, the cash market will be king with August expiration on Friday.

DAIRY HIGHLIGHTS: Herd size behind 2021 levels has not impacted milk production, and there certainly is no impact on milk quality. According to an August 5 report from the Milk Producers Council, year-over-year butterfat production has risen 2.25% with only “0.3% more milk in June than the year before, manufacturers made 2.3% more butter, 2.7% more cheese, and 5.6% more whey powder than in June 2021.” Both Class III and Class IV futures rebounded strongly for the second day in a row as a number of factors have given the market strength. Class III second month futures gained 34 cents today as buyers re-enter the dairy market to settle at $20.21, while the strength in butter carried Class IV to gains of 21 cents in the second month September contract to finish the day at $22.85. Spot cheese prices rebounded about ten cents off the lows as a weakening dollar and exceptionally strong exports give support.  Cheese supplies in the US are robust, but local demand and strong export demand have kept those high supplies in check. A drop in demand or increase in production could have a negative impact on the market.