With the focus on the USDA Crop Production report on the grain markets, the surprise cut in production came in the cotton crop.  Plagued by drought conditions and high temperatures this summer, the USDA lowered U.S. cotton production in 2022/23 is forecast at 12.6 million bales, down 3 million from July.  This is the lowest cotton production since 2009/10. Ending stocks forecast dropped to 1.8 million bales, the lowest since 1924-25, nearly 100 years.  The reason for the drop is the large number of abandoned acres of unharvestable crop because of those drought conditions.  The tight ending supplies pushed cotton futures limit higher on Friday’s trade. 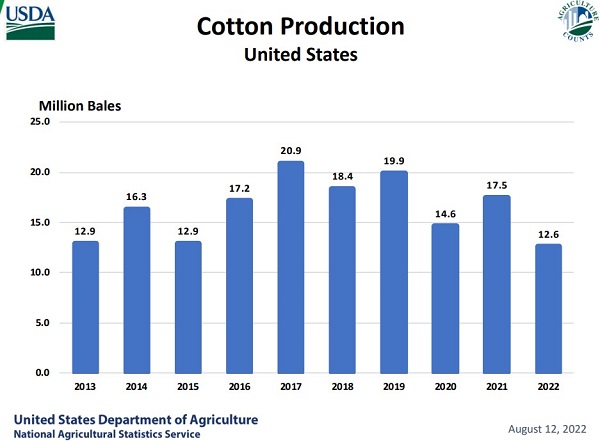 There are several line items in a monthly report that make up both the supply and demand numbers. Each side is totaled and then demand subtracted from supply.  What is left over carryout. Today’s carryout for bushels on hand (2021/2022 marketing year) was 1.53 bb, slightly above the per-report estimate of 1.518 and above the July estimate of 1.510. For the upcoming marketing year, carryout is forecasts at 1.389 bb down from last month’s 1.470 bb, however, in line with the pre-report estimate of 1.383 bb. The was a revision to acreage (the USDA did indicate, if necessary, they would report changes in SD, ND, and MN), yet it was only a reduction of 100,000 harvested acres from 81.9 to 81.8, nearly immaterial. Likely the biggest support for prices today comes in a continued weather concern, a struggle for enough moisture in the western Corn Belt. DTN’s Digital Survey this week suggest yield well less than the current USDA estimate. Today’s technical picture is looking friendlier with an inverted head and shoulder formation on December futures pointing toward 7.00. Today’s futures close above the 50-day moving average looks supportive. We remain cautiously optimistic.

SOYBEAN HIGHLIGHTS: Soybean futures ended up closing higher after a day of volatility following the USDA report. Prices fell after the report as it was bearish for beans, but eventually found buyers and recovered. Sep soybeans gained 14-3/4 cents to end the session at 15.35, and Nov gained 5-3/4 cents to 14.54-1/4. The Aug contract went off the board today at 16.69-1/4. For the week, Sep beans gained 71-3/4 cents, and Nov gained 45-1/2 cents.

Today’s USDA report offered a few bearish surprises that the market managed to shrug off before the day was over. Trade was looking for a decline in yields, but instead saw an increase to 51.9 bpa from 51.5 bpa last month. Harvested acreage was lowered by 300,000, but they increased production to 4.53 bb from 4.51 bb last month, with the increase in production coming in at the top of the trade range estimates. Perhaps even more surprising is that the USDA increased their forecast for 22/23 ending stocks to 245 mb from 230 mb last month, a number that trade was guessing would be lowered. On the demand side, they increased export forecasts by 20 mb to 2.155 bb. On old crop, the USDA also increased ending stocks by 10 mb to 225 mb due to lower exports. Globally, the USDA pegged ending stocks for 22/23 at 101.4 mmt, above the trade range expectations. Crush margins are still good incentivizing processors to buy cash beans which may have provided support to the otherwise bearish news today. For weather, lower temperatures and increased rain chances are spreading further West in the 6 to 14-day forecast, as the western Corn Belt has had the worst of the bad weather and rain will be sorely needed as the crop begins filling pods. Nov beans had a second consecutive close above their 50-day moving average, but bounced off the 100-day, which is acting as resistance.

All eyes were on today’s WASDE report, in which the USDA increased wheat production just a little bit to 1.783 bb (from 1.781 bb last month). US ending stocks for 21/22 were unchanged at 660 mb, but for 22/23 were reduced to 610 mb (from 639 mb). Planted acreage was also reduced 100,000 to 47.0 million acres. World wheat ending stocks for 21/22 were reduced slightly from 280.1 mmt to 276.4 mmt, however, the 22/23 numbers were virtually unchanged. August was pegged at 267.3 mmt vs July’s 267.5 mmt. Russian wheat production was raised by the USDA to 88 mmt, up from the previous 81.5 mmt estimate, but still below some of the private pre-report estimates in the 90’s. With the report now old news, the grain market will turn its attention back to weather, Ukraine exports, China, and perhaps inflation/recession. Additionally, as we have mentioned previously, long term wheat charts are very oversold and due for a correction. Short term momentum is still positive too. Only time will tell what the market does, but with this report out of the way and wheat prices at, or near, pre-war levels, we don’t anticipate a lot of downside risk at this time.

The cash market provided the strength in the live cattle market again this week with higher overall trade. Light to moderate trade came together this week with live deals in Kansas and Texas have been marked at mostly $140, roughly $3.50 to $4.50 higher than last week. Northern dress trade has been at mostly $229 to $230, about $2 to $3 higher than last week. The tighter cattle supply and the search for quality has packers staying active in the cash market.  The strong cash tone is expected to stay in the market again next week.  Retail values at midday were firmer as choice carcasses gained .22 to 263.32 and select was 2.34 higher to 239.80 The load count was light at 49 midday loads. Based on midday values, overall, choice beef traded steady to slightly lower.  The choice/select spread narrowed on Friday midday, but is still trading at a strong 23.52.  The cash market will stay active if packer margins are still friendly and the demand for quality beef remains.  Feeder cattle softened on Friday, pressure by the strong grain markets after the USDA Crop Production reports lower projection for this year’s corn crop.  Cash feeder prices in the countryside remain strong as producers struggle to secure cattle, which should keep support under the feeder market. The Feeder Cattle Index added 1.53 to 178.06. and is trading at its highest points since February 2015.  With August feeder expiation at the end of the month, the August contract was limited by its premium over the index. The overall market is still trending higher, and fundamentals stay supportive. The market saw some profit taking to end the week, but are still trending higher.  The strong cash market should carry over into next week.  Feeders will need to watch the grain market; additional strength could keep pressure on the feeder market.

The October and December futures traded to new contract highs this week as the large spread to the August contract and discount to the cash market supported those contacts. At the August and October, contracts were still wide at 21.700 and that should support the market in the near-term. In addition, the Lean Hog Cash Index is trading at a strong premium to the October futures, closing at 21.835 premium over the futures on the close.  The index was slightly lower on the day, losing .23 to 121.86. For the week, the Lean Hog Index traded .25 higher overall and is challenging the highs for the year that was established in April. Midday direct hogs cash trade has been choppy this week, and was softer on Friday, losing .63 to 118.14 and the 5-day rolling average at 124.19. The retail market saw midday pork carcasses trading quietly, losing .01 to 123.30. The load count was moderate at 222 loads. Pork retail values traded mostly steady to lower on the week. Estimated slaughter for the week is 2.309 million head, up 38,000 head from last week, but 21,000 below last year.  The trend will likely keep hog number below last year’s levels, so the carcass weight and total production will be key for prices. The hog market is strong and money flow supports the market, but softened into the weekend.  The retail values may have started to roll over, so demand will be key as hog numbers are still less than anticipated, and packer are still looking for product.  Still, in the short term, the cash market will be king, and it is likely that a near-term top is still not in place.

DAIRY HIGHLIGHTS: Milk futures capped off a back-and-forth week with mostly red on the board as the September Class III price fell 30 cents to $19.80, but was still 50 cents higher on the week. Help came from spot cheese which garnered 7.75 cents to the topside to hurdle back above the $1.80/lb mark with a close at $1.86625/lb. Within the Class IV products, spot butter dropped 7.50 cents on the week to $2.9350/lb with powder up 1.50 cents overall, leading to a 19 cent drop for the second month September contract. Price direction remains lower for Class IV futures, while the Class III market is attempting to build a base after the recent selloff. The only fundamental update next week will be Tuesday’s Global Dairy Trade Auction, which has fallen nine out of the last ten events.