With the end of the marketing year right around the corner, the pace of export inspections is being closely monitored to see if the sales for the marketing year will get shipped, cancelled, or rolled into the next year. Weekly soybean inspections for last week ending on Thursday, August 11, totaled 27.4 mb. This has total inspections for the year at 2.031 billion bushels, down 6% from the previous year. The USDA is targeting soybean exports to reach 2.70 billion bushels for the marketing year, down 4% from last year.  The current pace is running slightly behind the pace needed to reach the USDA target, but this is still considered supportive of the soybean market in general. The next couple of weeks will still be key and the shipping pace will remain firm with the marketing year ending on August 31. 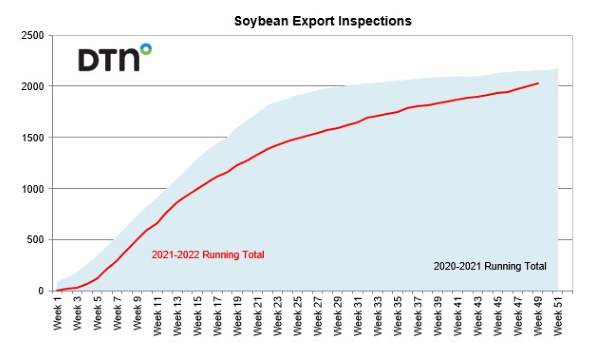 CORN HIGHLIGHTS: Corn futures followed soybeans and wheat lower as revised weather forecasts calling for rain in the western Corn Belt and concerns regarding the Chinese economy were considered reasons for today’s price drop. Sep closed at 6.26-3/4 down 13 cents, while Dec gave up 14 to close at 6.28-1/4. China lowered interest rates (the opposite of the U.S.) in what appears to be an effort to stimulate economic growth. The implication is that China may not be able to import as much agricultural goods, including corn, as forecasted. Expectations for weekly crop ratings to stay the same or decline may have kept prices from falling further.

Additionally, China is said to have cancelled imports from Australia citing quality concerns. This has not been confirmed, however, the implication is China pulling back from purchases. Importing countries, when a crop is maturing and looks like it will be harvested without problems or delays, tend to buy only as needed. This just-in-time inventory approach would suggest recent slow sales are due to high prices and buyers stretching supply until the new crop is available. Strong ethanol basis suggests limited near-term supply. The technical picture was bruised today but not damaged. Today was considered an inside day (Dec futures traded within the range of Friday’s price range) and while disappointing to bulls, would argue no clear directional bias. Weekly export inspections at 21.2 mb were termed neutral to negative.

Although prices remained firm on Friday following the USDA report that was mostly bearish for soybeans, the reality of the increase in yields seemed to set in today and sellers stepped in. The USDA increased old crop ending stocks by 10 mb to 225 mb due to lower exports as China has been absent lately with 21/22 purchases. The more that is being learned about China’s poor economic numbers, the more pressure that soybeans are under as trade worries about demand from the number one soy importer. Today China announced that they were cutting interest rates by 0.1% which came as a surprise as they attempt to boost their economic growth. Crude oil was also lower again today along with a big drop in palm oil, which caused Sep bean oil to close lower for the first time in the past seven days. The other big factor that went into today’s sell-off is the improved weather that is showing cooler temperatures and increased rain chances across most of the Midwest this week and better chances of rain throughout the rest of August. Rains that are expected from Iowa to Missouri over the next few days will also be helpful to crops that have struggled in recent weeks. Friday’s CFTC report showed that managed money were net buyers of soybeans and increased their net long position by 2,038 contracts to 101,509 contracts. In soymeal, funds now hold the largest net long position since April at 83,000 contracts. Nov soybeans closed below their 50-day moving average and have a gap lower on the chart at 13.49-1/4.

Grain markets were lower overnight initially due to agreement on the weather maps that some of the driest areas of the Midwest could see as much as 1-2 inches of rain this week. However, the bigger news affecting the markets today seems to surround China. There are conflicting reports as to why, but there was talk that China will restrict imports of ag products from Australia and New Zealand. Some sources suggest that this may be due to concern about an outbreak of foot and mouth disease, while others suggest that it may be political in nature. And yet, other reports suggest that these rumors are incorrect altogether. The bigger concern to traders is that if true, China might implement similar restrictions of U.S. commodities including corn and soybeans. In addition to all of this, there was a bit of a surprise in the fact that China lowered interest rates, which may signal their economy is not doing as well as hoped. While all of these things likely have a greater impact on corn, beans, and energies than wheat, it was still dragged lower by those markets today. Of course, other factors remain at play too. A reported total of 16 vessels have now left Ukraine, though they have been carrying mostly sunflower products and corn. In other news, weekly inspections for wheat were at 13.7 mb with total 22/23 inspections now at 143 mb. That is still down 23% from last year and is potentially adding bearishness to the market.

Weak economic data from China on the overnight began the selling pressure across the commodity markets for the day, as the cattle market was waiting for fresh news. The cash market trade was undeveloped as usual on Monday as showlists, bids, and asks were still being put together. The strong cash tone over the past couple of weeks is expected to be the direction of the market again this week. Cash trade will likely hold off until later in the week. Retail values at midday were firmer as choice carcasses gained 0.14 to 263.51 and select was 0.22 higher to 239.81. The load count was light at 44 midday loads. The choice/select spread narrowed on Monday midday but is still trading at a wide 23.70. The cash market will stay active if packer margins are still friendly and the demand for quality beef remains, especially as retailers put together their Labor Day retail marketing plans. Feeder cattle softened on Monday, pressured by the weakness in cattle markets. Failing to rally with weaker corn prices is concerning that the feeder market has gone far enough for the near term. Cash feeder prices in the countryside remain strong as producers struggle to secure cattle, which keep support under the Aug feeder market. The Feeder Cattle Index added 0.22 to 178.28. The overall market is still trending higher, and fundamentals stay supportive. The strong cash market should carry over into this week. Feeders may be more of a concern for some short-term profit taking, but the overall market is still well supported by tight supplies and cash market strength.

LEAN HOG HIGHLIGHTS: Hog futures were higher as Oct takes over as the new lead month and its discount to the cash market and strong retail gains at midday supported prices. The new lead month Oct traded 0.550 higher to 100.575 and Dec hogs gained 0.475 to 90.850, finishing with a new Dec contract high.

The general risk-off trade in the commodity markets put pressure on the front-end hog futures to start the session, but buyers stepped back into the market, supported by the cash trade to lift hog futures to a firm close at the end of the day. The firm price action should help the buyer at the start of the session on Tuesday. The Lean Hog Cash Index was slightly higher on the day, gaining 0.07 to 121.93. The index is challenging the highs for the year that was established in April and trading at a strong premium to the Oct futures, closing at 21.355 premium over the futures on the close. Midday direct hogs cash trade has been choppy, and was softer on Monday, losing 3.32 to 114.82 and the 5-day rolling average is at 123.52. The retail market saw midday pork carcasses trading strongly higher gaining 7.74 to 123.30. The load count was moderate at 180 loads. A strong close at the end of the day will be key for market direction on Tuesday’s open. The estimated slaughter for Monday was 428,000 head, down 30,000 head from last week, and 47,000 below last year. The trend will likely keep hog numbers below last year’s levels, so the carcass weight and total production will be key for prices. The hog market is still well supported by the cash market, and the jump in retail values on Monday’s midday trade was encouraging. The packers are still looking for product. Still, in the short term, the cash market will be king, and it is likely that a near-term top is still not in place.

DAIRY HIGHLIGHTS: The story of the day for dairy was the fact that there was aggressive bidding in the US spot butter and spot cheese markets ahead of tomorrow’s Global Dairy Trade auction. Cheese buyers added 8 loads today and bid blocks 4.50c higher, while bidding barrels 6.00c higher. The spot butter trade regained 5c and closed back up to $2.9850/lb, its highest close since August 5th. The bidding in the spot trade comes just one day before the next Global Dairy Trade auction. Recent GDT events have seen global price levels fall in 9 out of the last 10 auctions. Following the bidding in the spot trade, nearby Class III futures added 41 to 55c, while nearby Class IV were unchanged to up as many as 15c.