The wheat markets had a difficult week, as news turned more bearish for wheat prices causing a break in prices to new multi-month lows. All three classes of wheat futures were impacted, but the Dec KC wheat contract was one of the hardest hit, losing 45 cents this week, despite a 31-cent recovery on Friday afternoon. The news this week turned more negative for the wheat future; shipments of grain from Ukraine seem to pick up speed, getting some of those bushels on the market, Russia raised its forecast for this year’s wheat crop, adding to the supply picture globally, Iraq withdrew a tender for wheat supplies due to high prices, U.S. weekly export sales for wheat hit a marketing year low, and lastly, the U.S. dollar surged higher. All these headlines caused wheat futures to break support levels and technical sellers pushed prices to their lowest levels since February. The strong recovery on Friday was likely profit-taking going into the weekend, as the market will be watching the headlines closely. Concerns regarding a potential issue with a nuclear power plant in Ukraine may have the market cautious going into next week. Barring a black swan event of that magnitude, the wheat market will be looking for some positive news to try and turn prices back around. 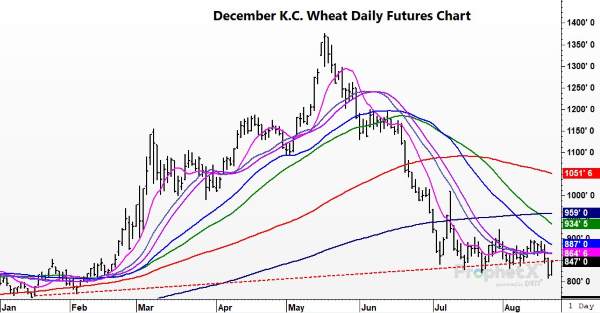 CORN HIGHLIGHTS: Corn futures ended the session on a firm note with Dec posting an outside trading range meaning today’s price activity exceeded both yesterday’s high and low price. Sep gained 4-3/4 to close at 6.19-3/4 and Dec added 3-3/4 to close at 6.15-3/4. Support came from higher soybean prices and continued thoughts that recent rains have not been enough to add weight to this year’s crop. Also, a slow but developing story is continued heat and dryness in parts of China’s corn crop which could turn into a big story on the world’s macro corn supply picture.

For the most part, corn futures are trading rangebound and have been for 6 weeks. The time of year suggests prices tend to move lower easier than higher. Anticipation of increased corn harvest from this time forward and little weather to affect the crop yield one way or the other suggests a defensive posture. Yet, with this year’s crop behind schedule, rain throughout August is essential for maturity. We hear more concerns regarding fill. Boots on the ground with the Pro Farmer starting next week will provide additional perspective. Technically, the 21-day moving average held as support today. The market is at a critical pivot point. If prices slide below 6.00 on Dec, this opens the door to a target of 5.84-1/4 where a gap would be filled. If this does not hold as support, then expect a retest of the low from July 25 at 5.61-3/4. If prices break resistance at 6.43 expect a test of 6.50 and then 6.75.

SOYBEAN HIGHLIGHTS: Soybean futures closed lower in the front months, but gained ground before the close bringing the deferred contracts up to close higher. The presence of China as a main buyer of U.S. beans last week is adding support to the market. Sep soybeans lost 6-3/4 cents to end the session at 14.88-3/4, and Nov lost 1-1/4 cent to 14.04.

Soybeans were lower earlier in the day but moved higher throughout the day, and while Nov closed lower, the Mar contract and on gained a penny. Some pressure came from favorable weather forecasts that show more moderate temperatures and showers through the Midwest and southern plains over the weekend and into next week. On the supportive side, demand for cash soybeans is very strong with crush margins well over 3 dollars a bushel, and Sep at an 84-cent premium to Nov. In addition, buying interest from China appears to be picking up and there are rumors that China had bought from 5 to 6 cargoes of fall soybeans from the U.S. this week. The extreme heat and dryness in China right now may pose a serious problem for their crop and could cause export business to pick up significantly while lowering the global carryout. Soybean export sales last week totaled 51 mb, the largest since April, with China taking at least 29 mb. Crude oil traded relatively unchanged, but soybean oil finally found some buying interest while meal closed slightly lower. The improved weather conditions for the U.S. crop could keep some pressure on the market, but if China has issues with their own production and needs to ramp up imports there is plenty of room for beans to run higher. Nov soybeans are consolidating around the 200-day moving average with a close above it today. There are gaps both higher and lower on the chart, so new headlines will be needed to send prices either higher or lower.

Wheat was able to stop the bleeding today and make a decent recovery beyond that. While the increasing pace of Ukrainian exports acts as a bearish signal, their harvest is reported to be 91% complete. An estimated 17.4 mmt of Ukrainian wheat has been harvested so far vs 32 mmt last year. Traders may be realizing that despite their exports increasing, there will still be a potential shortage compared to last year. This, coupled with the fact that futures are considered by many to be undervalued, may have played into today’s recovery. There is, however, some fresh news that may have had an impact today. The reportedly largest nuclear power plant in Europe is located in Zaporizhzhia, Ukraine. Several weeks ago, there were reports of shelling near this plant and concerns that damage could lead to a Chernobyl-type disaster. Those fears had subsided until now, with several news outlets reporting that a potential “false flag” attack could take place against the facility. Ukraine and Russia have both apparently warned of such an attack, and women and children in the immediate area have had to flee (with men between ages 18-60 required to stay in case they are needed for military duty). In the event that the plant loses power and the backup generators run out of fuel, the core could melt down and release radiation into the environment. This would devastate Ukraine’s grain production in the area for years to come, but the greater concern might be the nuclear fallout. Under the right circumstances, if radioactive particles are released into the air, they can be carried for potentially hundreds of miles into Europe by the wind. When the Chernobyl disaster occurred in 1986, wheat futures rallied sharply and an equivalent move in today’s market would be close to a two-dollar swing in price.

Friday saw the USDA release the August cattle on feed numbers after the market close. Total cattle on feed as of August 1 was close to expectations at 101% of last year with a total of 11.2 million head. Placements were above expectations at 102%. The placement numbers were boosted by a jump in light weight placements as weather conditions and input costs moved cattle off pastures and into lots earlier. The heaviest placed group of feeders were animals less than 600 pounds. Marketing was at 96% for last year, slightly below expectations. Initial reaction to the report will likely weigh on prices to start the week, but the longer-term view is still supportive. Cash trade was mostly quiet this afternoon with most business completed for the week. This week saw Southern live deals marked at $142, $2 higher than last week, and Northern dressed trades are being reported at mostly $234, $4 higher than last week’s total. The expectation is for cash trade to stay firm going into next week. Retail beef trade was firmer at midday, as choice carcasses gained 0.12 to 264.51 and select was 0.72 higher to 238.19. The load count was light at 34 midday loads. The choice/select spread stays well supported at 26.32. Choice carcass values traded relatively steady on the week holding the $263-$264 price range. Today’s slaughter totaled 122,000 head, 4,000 more than last week, and 5,000 above a year ago. Saturday’s kill is estimated at 40,000 head, bringing the weekly total to 661,000 head, 14,000 greater than the prior week, but 5,000 below 2021. Feeder cattle were softer as the firmer tone in the corn market pressured feeders. Cash feeder prices remain strong as producers struggle to secure cattle. The Feeder Cattle Index lost 0.65 to 179.21 but finished 0.93 higher on the week. The overall market is still trending higher, and fundamentals stay supportive. The strong cash market tone keeps prices supportive, but the market may be entering a cautious seasonal window. The Cattle on Feed report could bring some selling pressure to start the week, but the longer-term trend still looks friendly.

Hog prices were pushed lower as the Oct contract is looking to drop to the 200-day moving average and the price gap at 89.750 from early July. Dec futures did trade to fill the July gap and are in shooting range of the 200-day moving average. Oct was supported by the discount it carries to the cash market. The cash trade was lower again, as midday direct cash trade was 2.77 lower to 116.35 and a 5-day rolling average of 123.43. The Lean Hog Cash Index was softer on the day, slipping 0.02 to 120.60. For the week, the index traded 1.26 lower, reflecting the softer cash tone. The index is still trading at a strong premium to the Oct futures, closing at 27.475 premium over the futures on the close. The retail market saw midday pork carcasses trading lower, losing 2.75 to 117.16, as prices are trending lower this week, losing nearly $7.00 for Monday’s close. The load count was moderate at 173 loads. This week saw the cash market and retail market pullback off its highs, which is typical in this seasonal widow. With the hog market heavily bought, it was suspect to some strong profit taking, which occurred. Going forward, the market is still looking for a low, but could quickly get undervalued due to the overall fundamentals.

DAIRY HIGHLIGHTS: Class III second month futures finished the week at $19.75, faltering after trading above $21.00 on Tuesday and lower than where it closed last Friday at $19.80. Class IV second month futures traded slightly higher on the week. After finishing last week on 8/12 at $23.18, the September contract settled at $23.50 today and is still trending higher after hitting a recent low of $22.60 on August 8. Spot butter has not traded under $2.90/lb since June 1; the market closed the week out at $2.94/lb with a weekly high of $2.99/lb. The block/barrel average started the week near $1.92/lb. and finished lower today at $1.8575/lb. The dairy markets have settled into these ranges recently with $20.00 for Class III and $23.00 for Class IV showing signs of technical support. Given there have not been any drastic changes fundamentally within the dairy market, this consolidation of prices will likely stick around under current market conditions.