As the corn market is looking towards this year’s harvest and a potential tighter supply picture than anticipated, forecast for next year’s Brazilian production may help limit some enthusiasm for prices.  CONAB recently published forecast for the Brazilian 2023/24 corn production to possibly hit record levels.  The expectation is for Brazil to produce 4.941 billion bushels of corn or 125 MMT in the upcoming crop year.  This will be achieved as projected acreage will also hit a record 55 million acres next year.  The strong price for corn and prospects of improve demand have helped fuel the acre growth and expected production.  There will be al lot of variables going into the next crop year in Brazil, and weather will be at the top of the list.  If these production levels are achieved, the competition against U.S. corn for export business will likely limit rally potential on U.S. corn prices in the next marketing year. 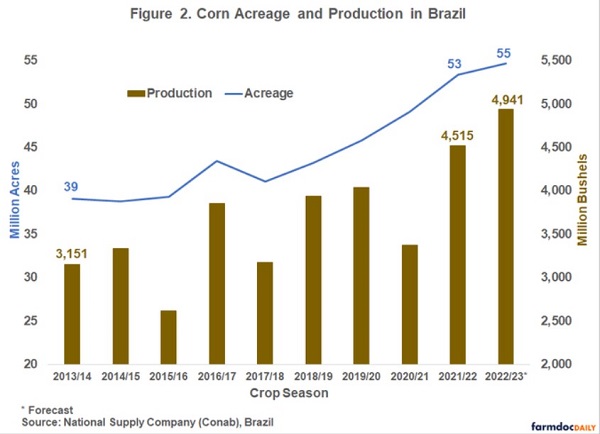 CORN HIGHLIGHTS: Corn futures softened on a lack of new positive news and weaker energy prices. Crude has lost near 8.00 from Monday’s close, now trading near 89.00 per barrel. A lack of positive news and economic signs that China’s economy continues to weaken kept prices in check. Soybean futures were down near 10 cents, however, wheat was up about the same. September corn lost 6 cents to end the session at 6.73-3/4, while December gave up 6-3/4 to close at 6.70-1/2. This is the first time since August 16 that December futures closed lower two consecutive sessions.

Recent rains in parts of the Midwest will help to add weight to the crop, yet other areas are lacking precipitation and a mostly dry forecast suggests these acres could lose weight as maturity and dry down continue. We are not sure it is a trend, however, recent communication with some producers suggest corn is maturing quickly. This might suggest an earlier harvest for some, potentially keep end users less than aggressive as they wait for supplies. Despite the potential for an earlier start to the harvest season, outside market macro events probably were likely more responsible for today’s price pressure. More Covid restrictions in China were announce and this could keep buyers at bay. Overhead resistance for December is 6.85, just above the high from Monday (6.83-3/4), and where the upper Bollinger Band. Support is 6.47-3/4.

SOYBEAN HIGHLIGHTS: Soybean futures closed slightly lower today after bouncing around both sides of unchanged throughout the day. Lower crude was unsupportive, but purchases by China and large crush margins have kept things from selling off severely. Sep soybeans lost 5-1/2 cents to end the session at 15.07-1/2, and Nov lost 10 cents to 14.22-1/2.

Soybeans were up and down all day, but surprisingly, bean oil was able to rally at the end of the day to close positive despite sharply lower crude oil. Today, the UK reported inflation data that was higher than expected, which pressured nearly all commodities, and news of China’s contracting economy has been a concern as well. Crush margins are very high right now with Monday’s USDA report for last week showing the value of soybean products exceeding the cost of soybeans by 5.82 a bushel in Illinois and 6.05 in Iowa, a generous incentive to soybean processors. The average trade estimate for the upcoming July Census crush is 180.5 mb, compared to 174.1 mb last month. 180.5 mb would be the second largest crush on record. Private exporters reported another sale of 6.1 mb of soybeans to China for delivery during the 22/23 marketing year, which comes just after yesterday’s sale of 9.7 mb to unknown destinations yesterday. Between the US and South America, as many as 40 cargoes of beans are rumored to have been bought in the past two weeks. Next month the USDA will release their new supply and demand report and while changes to the corn yield seem unavoidable, the bean yields are unlikely to be changed much and could point to record yields. Nov beans are still in their rangebound pennant formation and have gaps both higher and lower on the chart, but have been able to hold above the 50-day moving average.

Grain markets were under early pressure as August inflation data from the United Kingdom came in higher than expected. China’s PMI data also suggest that their economy continues to slow. Despite these things, wheat managed to end the day on a positive note, perhaps due to more concerns about the Black Sea region. The ag minister in Ukraine stated that the war could decrease their winter wheat planted acreage another 20% to 9.4 million acres. As the war rages on, there were also new reports of Russian shelling of grain silos in the Mykolaiv port in Ukraine. Domestically, the US dollar remains near its high and may still be preventing wheat from rallying further however. The strength in the dollar puts US wheat exports at a disadvantage compared to less expensive producers globally. US prices are uncompetitive to the Black Sea, and Russia continues to lower their export tax. This is giving buyers confidence to buy Russian wheat. Like Chicago futures, Paris milling wheat futures are back in a sideways trading range as wheat futures markets seem to be forming a bottom.

CATTLE HIGHLIGHTS: Cattle market saw selling pressure return as the August contract expired and the cash market is slow to develop this week. August live cattle, which expired today during the session, lost .950 to 141.550, and Oct live cattle lost 1.250 to 142.575.  Feeders were mixed on the day as Sept added .275 to 182.450 and October added .200 to 183.475. The remaining differed contracts traded lower on the day. With the month of August turning to September, October live cattle were .350 higher for the month, and Sept feeders gained .900 during the month of August.

With August to the sidelines, October will be taking over as the new lead month.  October saw weak price action and has the potential to challenge support at the 100-day and 200-day moving averages, or near 141.900.  Cash trade remained quiet overall, but saw some light trade begin to develop on Wednesday.  Nebraska/Iowa dress trade at $227-228, which is $5 under last week.  Cash bids are slow to develop at $144, still holding the trend softer than last week. The weak cash tone keeps the pressure on the front end of the market.  The cash market is still dealing with a wide spread between northern cattle and southern cattle as feedlot numbers are low in the northern portion of the countryside.  The futures market seems to be tied to the published cash trade in the South. Today’s slaughter totaled 125,000 head, 1,000 more than last week, and 6,000 greater than a year ago. Retail values were softer at midday, adding to the selling pressure. At midday, choice carcasses dropped 1.51 to 258.28 and select was 1.26 lower to 238.42. The load count was light at 106 midday loads. Choice carcasses are trending lower this week, which could be a concerning trend. The corn market pulled back on Wednesday, and that supported the feeder market overall. The weaker live cattle tone limited gains overall as bull spreading was working in the feeder market. The Feeder Cash Index traded .16 lower to 183.00.  September has shifted to a small discount to the index, which should help support feeder futures. Price action was disappointing on Wednesday as the softer potential cash tone has weighed on the market for live cattle.  Key supporting under the market and will likely be tested; this area needs to hold or further long liquidation will be possible.

October hogs traded back to support at the 200-day moving average, and still looking at the downside gap from July 5 at 89.750, which still leaves a cautious bias. The combination of softer retail and cash tone triggered some profit taking at the end of the month.  Retail values were firmer at midday with carcasses gaining 2.43 to 104.59. Today’s midday load count was moderate at 157 loads. The afternoon close in the retail market will be key to help provide some stability to the hog futures.  The cash trade was lower as midday direct cash trade was down 1.27 to 105.11 and a 5-day rolling average of 117.32. The Lean Hog Cash Index was sharply lower again on Tuesday, losing 1.90 to 109.36, maintaining its trend lower. The index is still trading at a premium to the Oct futures, closing at 17.835 premium over the futures on the close, as the cash market seems to be dropping to meet the futures’ value and the trend will limit upside gains overall.  Estimated hog slaughter on Tuesday was 475,000 head, down 5,000 from last week, and even with last year. The hog market was trying to turn higher, but position squaring and weak cash tone pressured the markets.  Prices need to hold support, or a test of the recent lows may still be in order.

DAIRY HIGHLIGHTS: Milk futures finished lower for the third day in a row on Wednesday as the spot cheese price fell beneath the $1.80/lb level for the first time since August 8th. The cheese trade continues to be pressured by record inventory levels that in July were 5% higher than the same month last year. In today’s cheese trade, blocks fell 2.50c to $1.7250/lb on no loads traded while barrels held steady at $1.85/lb on no loads traded. The block/barrel average is now back down to $1.7875/lb. Over in the class IV trade, spot butter was bid 0.50c higher to $3.0550/lb and spot powder fell 1.50c to $1.55/lb. The butter outlook remains bullish with inventory levels down over 20% from a year ago. Nearby class III futures were down about 16-30c Wednesday while nearby class IV futures fell 13-46c.