Crude oil futures are challenging recent lows as technical selling pressures the market, despite tight global crude oil supplies.  Crude oil futures traded over 3% lower as the October contract traded through support at the 200-day moving average.  Global crude supplies are historically low, but concerns about demand and the global macro-economic environment have weighed on futures, which have lost over $10.00 a barrel this week.  New COVID lock downs in China resurfaced, and the constant talk of recession have the market questioning potential future demand. China is the world’s largest importer of oil.  In addition, the market is watching any development regarding an Iran oil deal, which could bring supplies onto the market.  The crude oil market is a key point of support near the $86.00/barrel level.  Further weakness could have oil prices looking to challenge the $80.00 level, which will likely weigh on sentiment in the commodity markets. 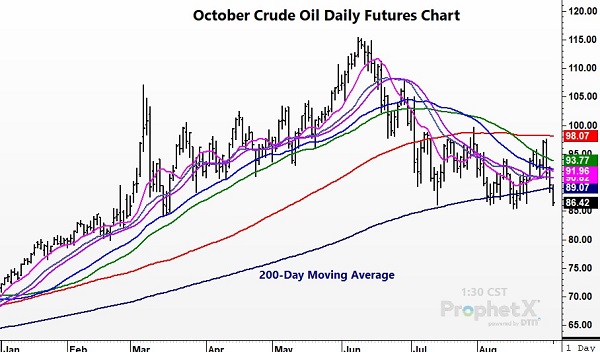 CORN HIGHLIGHTS: Corn futures closed lower for the third session in a row, racking up double digit losses today. September gave up 15-1/2 cents to close at 6.58-1/4 and December lost 12-1/2 to end the day at 6.58. No technical damage on charts occurred, yet it was another risk off session for commodities as energy, wheat, and soybeans also experienced sharp losses. Growing concern that China’s economy is struggling is also beginning to weigh on traders’ minds as some are calling for a world-wide recession.

A new high in the U.S. dollar due to rising interest rates, coupled with an impending harvest and a three-day weekend ahead of the market, may have all been reasons why traders were headed to the sidelines. Yet, we would be cautious to become overly negative prices. It is likely prices will trade rangebound between 6.00 and 7.00 December, with harvest pressure, suggesting more of a chance for 6.50 or lower. Bottom line is that crop prospects in the northern hemisphere will not live up to expectations from earlier in the year. Add to that a war that continues to linger on with no apparent end in sight and it becomes rather challenging to expect tight supplies to keep up with demand. Normally, export sales are released on Thursday, but due to a new reporting system and technical glitches, export sales will not be reported until September 15. This will be after the next WASDE report due for release August 12.

SOYBEAN HIGHLIGHTS: Soybean futures closed lower again today as outside bearish influences have pressured most commodities. Lower crude was bearish, but a newly reported export sale was a highlight. Sep soybeans lost 34-3/4 cents to end the session at 14.72-3/4, and Nov lost 27-3/4 cents to 13.94-3/4.

Commodities were pressured in general today with recession fears, China’s contracting economy, tensions with China and Taiwan, and continued tensions with Ukraine and Russia. There are bullish underlying fundamentals for the soy complex, but right now, these macro issues are driving markets lower.  The USDA reported that another 14.6 mb of soybeans were sold to unknown destinations for the 22/23 marketing year, after 6.1 mb were purchased yesterday by China, and 9.7 mb the day before that. China is clearly getting aggressive with their purchases, despite the new Covid lockdowns being imposed and general concern about their demand. The new lockdown area in China is the city of Chengdu, which has a population of 21 million people. Crude oil took a dive again today, as well as heating and palm oil, which pressured both soybeans and soybean oil. Soymeal was exempt from the selloff, however, and closed higher on expectations that the July Census crush reached the second highest level on record, with traders forecasting a 180.5 mb crush rate, compared to last year’s 166.3 mb. Board crush is still historically strong with October at 1.81 per bushel and new crop over 2.30 per bushel. Nov beans remain in their pennant formation and so far, it is uncertain to which direction it will break out and when, but the USDA report on the 12th may provide a catalyst.

It was a rough day for wheat to say the least. All three US classes were sharply lower and Paris milling wheat was also down. The US Dollar Index made a new high, getting close to the 110.00 level today. This, along with recession fears, likely pressured wheat and put it right back in the sideways trading range. The fact that Ukraine is still exporting grain is also unsupportive (though they have not shipped much wheat so far). The US is simply not competitive pricewise with Black Sea exports. There is uncertainty though with grain silos in the Mykolaiv port being shelled. Globally, however, taking away the Black Sea, world exporter stocks to usage ratio is record low. There are still factors that point to the supportive side of things as well. For example, talk that the French corn crop production could be down 40% really makes one wonder about their wheat crop as well. In other news, the International Atomic Energy Agency visited the Zaporizhzhia nuclear power plant to assess damage and threats after more shelling in that area. Concern still exists that damage to a reactor could lead to radiation leakage. As a reminder, grain markets will be closed Monday in observance of Labor Day. Additionally, the market would normally receive export sales data today. However, due to a problem with the new reporting system, the USDA said they will resume the release of the export sales report on September 15.

October cattle are in a near-term down trend as the cash market has drifted softer the past couple weeks.  October was holding a premium to cash and had room to give up some value. Though prices finished slightly higher, the price action in the October chart was soft today, as the market may be poised to challenge support at the 100-day and 200-day moving averages, or near 141.900.  Cash trade has been light to moderate this week with trade in the South at $141, $1 lower than last week’s averages. Light business has developed in parts of the North. Early trade was at $230, $3 lower than last week’s weighted averages. The weak cash tone keeps the pressure on the front end of the market.  The futures market seems to be tied to the published cash trade in the South, which has limited gains in the October futures. Today’s slaughter totaled 125,000 head, 1,000 more than last week, and 7,000 greater than a year ago. Retail values have trended softer, helping to limit price gains in the futures. At midday, choice carcasses dropped .80 to 257.54 and select was .97 lower to 236.77. The load count was light at 49 midday loads. Choice carcasses are trending lower this week, down over $4.00 from last Friday’s close, which is a concerning trend. The corn market pulled back again on Thursday, and that supported the feeder market overall, and the technical picture in the grain market looks negative, which could keep buyers active in the feeder market.  The Feeder Cash Index traded .68 lower to 182.36.  September pulled mostly in line with the index. Both live cattle and feeder cattle are in a short term down trend, as fundamental factors have turned less supportive.  Cash trade is trending softer, and retail values are moving past summer demand.  For feeders, further weakness in the grain markets may be enough to provide good support.

LEAN HOG HIGHLIGHTS: Lean hog futures were mixed to mostly lower as prices were looking for overall direction.  Oct hogs were .425 higher to 91.950 and Dec hogs slipped .100 to 83.775.

October hogs held support at the 200-day moving average, and still looking at the downside gap from July 5 at 89.750, which still leaves a cautious bias as prices are consolidating along the 200-day moving average. The market is looking for the fundamentals to help bring support to prices overall. Even with the cash index trending lower, the index is still at a strong premium to the October futures of 15.670..  On Thursday, the Lean Hog Cash Index was an additional 1.74 lower to 107.62. The cash trade was lower as midday direct cash trade was down 5.77 to 99.34 and a 5-day rolling average of 105.43. The trend lower in cash is still very concerning, despite the index premium. Retail values have found some footing since crossing under the $100 barrier last week.  At midday, retail carcasses traded firmer gaining 1.05 to 104.24. Today’s midday load count was moderate at 159 loads. Weekly export sales were still not released on Thursday morning due to technical issues at the USDA.  The next round of sales numbers the hog market will see will occur on September 15.  This lack of information is not helping the hog market, which is closely watching demand trends. The afternoon close in the retail market will be key to help provide some stability to the hog futures.  Estimated hog slaughter on Tuesday was 480,000 head, up 4,000 from last week, and 4,000 over last year. The hog market is still in a down trend, and the recent price action keeps us cautious that the market is still looking to set a low.

DAIRY HIGHLIGHTS: A higher dollar and overall weak commodity trade dragged milk prices lower today, although many nearby contracts managed to close off the morning lows this afternoon. The roll to October as the second month brought the continuous Class III chart to $19.52 today. That chart tested but held $19.00 at the beginning of August and that point will be watched as initial support. The second month Class IV chart is now back beneath $24.00, an area that chart has not spend a ton of time beneath over the last seven months. Tomorrow’s Dairy Product Production report will bring an update to the cheese and butter supply situation, which remains at a large impasse with cheese inventory high and butter inventory manageable to slightly short.