The CME and Total Farm Marketing offices will be closed Monday, September 5, 2022, in observance of Labor Day

Export demand out of Brazil for corn has hit a possible record in August as export shipments jumped higher.  Preliminary data suggests that Brazil shipped an all-time record corn volume of 7.55 MMT, or approximately 300 million bushels, in the month of August.  The combination of higher prices, U.S competing corn and ample supplies after Brazil’s strong harvest helped fuel the strong export demand.  The competition against U.S. bushels and the price difference helped pressure U.S. corn prices on spring highs, as the fresh and readily available Brazilian supplies eroded the demand for U.S. corn.  Brazil has become a major player in the corn export market and will likely stay that way going into he future.  Recently release expectations are for the 2034-24 corn crop is to eclipse this year record production, which will limit rally potential for U.S. prices. 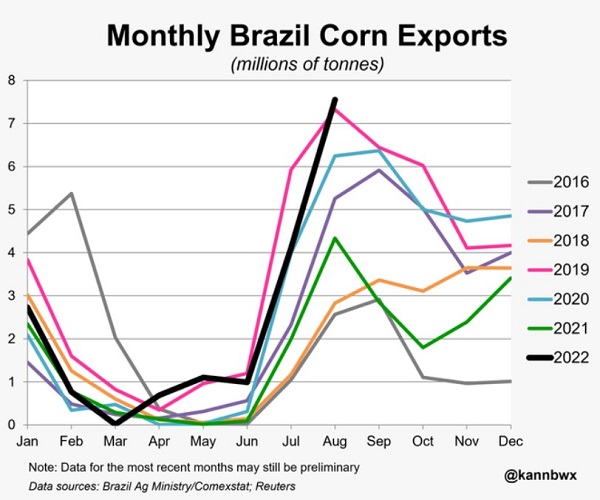 CORN HIGHLIGHTS: Corn futures rebounded today, finishing on a firm note, gaining 10-3/4 cents in September and adding 7-1/2 in December. September closed at 6.69, adding 0-1/4 cents for the week. December closed at 6.65-3/4, gaining 1-1/2 from last Friday. Bullish enthusiasm this week was tempered by a host of macro-economic concerns, including a higher dollar, lower, energy complex and continued concern that weak economic conditions will foster a worldwide economic recession. Add to that an impending harvest and prices reaching over-head resistance early in the week, setting the stage for a pull back from weekly highs. December reached it’s highest price Monday at 6.83-3/4.

From a macro perspective, the northern hemisphere will produce less crop than is needed to grow world supplies. This suggests the southern and northern hemispheres will require near ideal crops in the year ahead. We don’t see a quick resumption of production in trade for at last another year for Ukraine. While it is likely that some of the crop could benefit from rain, a lack of precipitation in the forecast for most of the Midwest suggests the likelihood of the crop gaining yield or test weight is low. The bottom line is the crop pretty much is what it is. Price is relative. If, at current prices this was the highest level of the year, farmers would likely be happy and selling more. Since prices peaked at a higher level, it feels to many these prices are just ok. December at 6.65 is historically a very good price. Monitor basis and if fall basis is stronger than usual and storage is limited, make sales. You will have a much better idea of your crop potential that you did when the market peaked on May 17.

SOYBEAN HIGHLIGHTS: Soybean futures closed higher today after four straight days of losses. The lower dollar, higher crude, and increased pace of exports to China have been supportive. Sep soybeans gained 37-3/4 cents to end the session at 15.10-1/2, and Nov gained 25-3/4 cents to 14.20-1/2.

Although China continues to lock down major cities due to Covid, soybean demand remains strong. The USDA will not release export data until the 15th, but we know that 59 mb of soybeans have been sold to China and unknown destinations over the past 10 days. November soybeans on the Dalian exchange were down 1.3% today at the equivalent of $19.65 a bushel. While foreign demand is strong, it is strong domestically as well with the USDA’s NASS reporting yesterday afternoon that 181.3 mb of soybeans were crushed in July, up 9% from the July total a year ago, and the second largest ever. Based on January futures, one bushel of soybeans can produce 17.35 worth of beans and oil, a 3.10 premium that is incentivizing processors and giving support to soybeans. Soybean oil closed higher today helped by higher crude and reports from Russia’s Gazprom that they would not be resuming gas supply to Europe tomorrow as expected, blaming an oil leak. While demand has been very strong, both the US and South America are possibly on track for record production. Stone X released their estimates for US soybean yield yesterday which came in at 51.8 bpa compared to their previous estimate of 51.3 bpa. Nov soybeans continue to form their pennant formation but closed back above the 200-day and 50-day moving average after falling below it yesterday.

After a selloff yesterday, wheat tried to make a recovery today but remains right in the middle of the sideways pattern. Concern still exists around China and their lockdowns with reports that Shenzhen has Covid restrictions on 18 million people, and Chengdu has 21 million people on complete lockdown. In Ukraine, the winter wheat planting / production for 2023 looks like it will be greatly reduced by the war; Ukraine’s Agrarian Council said planting could be down 30%-40%. As we mentioned yesterday, drought in many parts of Europe is also a major concern. The French corn was rated only 45% good to excellent and their harvest has started at a record early time. This raises question about just what that means for wheat. In other news, it was reported that GASC in Egypt purchased 120,000 mt of wheat from Russia. In the southern hemisphere, 40% of Argentina’s wheat ground is dry and their forecast has the potential for freezing conditions in the next two weeks (which could affect their crop). With markets closed Monday for Labor Day, there could be increased volatility early in the week when trading resumes.

With August expiration past, and the Labor Day weekend here, the cattle market looks like it shifted its focus forward into the end of the year and the tighter cattle supply picture.  Good price action in outside market early in the day provided support as a favorable payroll number report help bring some optimism into outside markets.   Cash trade was quiet today as trade this week was mostly complete. Light fed cattle cash trade occurred in the North this week with most trade catching $143 to $144 live and $228 dressed, which is $2 to $4 softer than last week. Light to moderate volumes traded in the South at $141 live, $1 softer than the prior week. The direction of cash trade will be a key going into next week, given the premium the October contract has built over the cash market after Friday’s trade.  The futures market seems to be tied to the published cash trade in the South, which has been a limit to the October futures. Retail values found some footing on Friday.  At midday, choice carcasses gained 1.90 to 259.97 and select was 1.72 higher to 238.31 The load count was light at 51 midday loads. Choice carcasses are trending slightly lower this week, down over $4.00 from last Friday’s close, which is a concerning trend. Feder cattle saw buying support from the strength in live cattle, despite a strong price action in grain markets.  The Feeder Cash Index traded .68 lower to 182.36. The index traded .11 higher on the week and is still at its highest level since 2015. September pulled mostly in line with the index. The price action to end the week was encouraging as charts posted weekly hook reversals higher.  The trade next week will be key as the market moves past the Labor Day holiday.  Retail carcasses still hold good value, but the cash market will still be king.

LEAN HOG HIGHLIGHTS: Lean hog futures pushed lower led by the disappointing trend in the cash markets as the October contract pushed to its lowest close since July. Oct hogs were 1.925 lower to 90.025 and Dec hogs fell 1.075 to 82.700. For the week, October hogs traded .625 lower and December hogs dropped .250.

October charts are concerning with the close under the 200-day moving average to end the week, leaving a weak technical signal going into next week.  October did trade and close the July 5 gap at 89.750 on today’s low.  At times, markets will trade to those gaps, and reverse direction after filling the gap.. We will have to see the thought of the hog market next week.  Fundamentals are still concerning.  On Thursday, the Lean Hog Cash Index was an additional 1.36 lower to 106.26. For the week, the Cash Index traded 9.79 lower as cash prices tumbled. October futures are still trading at a 16.235 discount to the index. The cash trade was lower as midday direct cash trade was down another 2.74 to 96.60 and a 5-day rolling average of 103.63. The trend lower in cash is still very concerning, despite the index premium. Retail values have found some footing since crossing under the $100 barrier last week.  At midday, retail carcasses traded firmer gaining .31 to 102.17. Today’s midday load count was moderate at 180 loads. Retail values have traded mostly steady this week going into the Friday afternoon close. The afternoon close in the retail market will be key to help provide some direction into Tuesday’s open.  Estimated hog slaughter for the week was 2.340 million head, which is down 25,000 from last week and 14,000 from last year as the weakening cash may have slowed animal movement. The hog market is still in a down trend, and the recent price action keeps us cautious that the market is still looking to set a low.

DAIRY HIGHLIGHTS: After a strong selloff in the Class III market to begin the week that had September and October futures flirt with $19.50, Friday’s bounce saw 21-cent gains in September and 53- cent gains in October. The record high inventories in cheese have not limited that market as the spot block/barrel price saw gains on the week overall to settle at $1.81 per pound. Butter continues its bull run as low inventories have driven spot prices to $3.10 per pound. Although not linear, the spot butter price has risen from 2.94 on 8/19 to today’s level. Consolidation is king as Class III and IV prices have been generally range bound since early July as the markets await a fundamental change that can shift the markets up or down.