Concerns regarding Chinese demand for global soybean have been an overhang in the market, and the recent August export data only help confirm those fears. In August, China imported 7.17 MMT of soybeans for exports, down 24% from last year and the lowest August total since 2014. China’s appetite for soybeans has been limited by historically high soybean prices, poor crush margins, lower than expected animal feed productions, and economic slowdown due to COVID lockdowns. Regardless, the news is bearish to the soybean market as the expected export total will likely be reduced, which could elevate total soybean carryout. Going into the new marketing year, the soybean market will be closely watching the actions of the world’s largest soybean importer to see if the export business will pick up to historical levels. 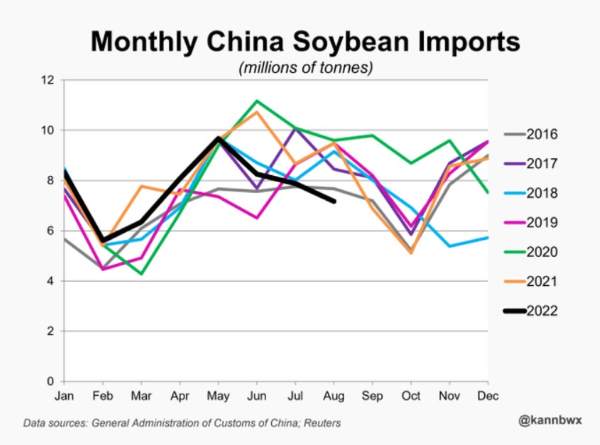 CORN HIGHLIGHTS: Corn futures were lower on the overnight due to weaker crude oil prices, an impending harvest, and a higher U.S. dollar. However, the president of Russia indicated they want to review the export corridor deal suggesting grain was headed to Europe and not poor countries. This shot wheat prices higher, gaining more than 40 cents after the pause session. This had traders on the offensive with corn gaining near 10 cents. Additionally, support from weather forecasts indicated an extended La Nina pattern into January, which could affect South America as well as the southwest U.S. However, as losses mounted in crude oil, the rally in corn lost steam and futures moved back into negative territory giving up 4 cents in Sep to close at 6.76-3/4 and dropping 5 in Dec to end the session at 6.71. Crude oil trading near 82.00 is at its lowest level since the war in Ukraine started in late February. Economic concerns and Covid lockdowns in China seem to be the catalyst for expected lower energy demand.

As the war in Ukraine continues, there is a growing reality that acres planted for spring crops are in jeopardy. This could suggest continued tight supplies. Drought conditions in China have limited wheat production, yet for nearly two months the market has remained rangebound. Bears argue that prices are holding at levels that are higher than historically normal and demand can’t keep up. Bulls in wheat may have been on the sidelines as the dollar continues to surge. Yet, world exportable supplies of wheat remain snug. Wheat as a feed substitute for corn does not make sense at this time, therefore demand should have been strong. Mexico was noted buying this morning well over 200,000 mt. Futures reached their highest level since June 23, yet the reversal downward at the close may have sent a signal to the market that a near-term high is in place. Today’s rally in futures also moved to resistance at a 62% retracement of the spring high to summer low, a potential area for traders who were long to exit.

SOYBEAN HIGHLIGHTS: Soybean futures closed lower today after trading higher the first half of the day. Crude oil was pummeled today, the Chinese economy is looking increasingly sluggish, and Argentinian farmers continued to sell soybeans at a rapid pace. Sep soybeans lost 23-1/4 cents to end the session at 14.66-3/4, and Nov lost 15-1/4 cents to 13.83-1/2.

The entire grain complex started off on a high note this morning after Putin said he wanted to revise the Ukraine grain deal, sparking worries that he would cancel the agreement altogether. Around noon, however, Ukraine stated that Russia had no grounds to review the deal, and grains fell significantly off their highs. Soybeans saw the worst of this, as crude was already much lower and ended the day down nearly 5 dollars a barrel. Palm oil was sharply lower along with the crude, in turn bringing bean oil lower. Yesterday it was reported that China had as many as 65 cities and 300 million people under Covid-related lockdowns, and today it was reported that China’s growth in the first half of the year was only 2.5%, far below their 5.5% goal. There is still no official export data, but we know China has been buying soybeans from both the U.S. and South America. However, according to customs, China’s August imports of soybeans fell by nearly 25% from a year ago, and crude oil imports fell by 10%, showing how the lockdowns have hurt demand. In Argentina, farmers continued piling on the selling to take advantage of the soy dollar incentive and have now sold a total of 2.13 mmt in just two days, with reports that China bought 7 cargoes. Soybean crop conditions were unchanged in the U.S. at 57% good-to-excellent, with 94% setting pods, and 10% dropping leaves. Analysts are estimating yields in a range from 51.3 to 52 bpa when the WASDE is released on Monday. Nov beans are still in their pennant formation at the bottom of the pennant, with the gap lower at 13.49.

Wheat has been in a consolidation pattern but has certainly broken out of that pattern today, with the daily high in Dec Chi wheat at 8.73, the highest wheat has been since July 12. Wheat started off the day around 50 cents higher after reports came that Vladimir Putin said that he wanted to “revisit” the Ukrainian wheat deal as he feels that the grain is not being exported to the countries most in need, but instead to wealthy countries who did not need the grain as much. This sparked fears that he would strike down the entire deal, but around noon Ukraine put out a statement that Russia has no grounds to review the deal, and after that, prices started to slide. If Putin is already hinting at his dissatisfaction with the export agreement, it is very possible that he may stop honoring it, making export business again impossible. Russia has continued shelling around the nuclear power plant as well and caused it to go off the grid again yesterday to rely on its diesel generators. This prompted a warning from the UN about the potential for a catastrophic leak of radiation that would devastate the surrounding area. In the U.S., the spring wheat harvest has been marked as 71% complete, while winter wheat is just beginning. The Great Plains region needs to see some rain within the next 7 to 10 days. Dec Chi wheat finally broke out of its rangebound pattern and closed right at the top of its Bollinger Band.

A difficult day in the cattle markets, as the weak price action posted reversals of the daily highs. Oct cattle traded 1.250 of the daily high and finished with a bearish hook reversal that could lead to additional selling pressure. The crude oil market was a big factor as prices fell over 5% to the lowest levels since January. The weak tone in crude seemed to trigger liquidation in the commodity sector and money supported the equity market. Cash trade was still undeveloped today, early bids in the South were seeing $140, slightly lower than last week. The lower bid tone seems to be also holding in the North. The Oct contract is running at a premium to the current cash market and helped add to the selling pressure. The expectations are for cattle numbers to start to tighten and make near-term cattle supplies more manageable. That picture could help build some leverage for feedlots in the cash markets, but this week looks to be working lower. Retail values were mixed on Wednesday. At midday, choice carcasses gained 1.75 to 262.22 and select was 0.17 lower to 239.13. The load count was improved at 124 midday loads. Weekly export sales are still an unknown this week, as the USDA will begin reporting that data again on September 15. Feeder cattle saw strong selling pressure with triple-digit losses across the complex. The weakness in the entire cattle complex weighed heavily on feeder futures. The Feeder Cash Index traded 0.44 lower to 179.14. Sep feeders were trading at a $5.00+ premium to the index and that added to the selling pressure, tightening that spread. Difficult day in cattle markets, bringing some caution to the market. The talk of a recession may keep caution in the market. Today’s price action is disappointing and could open the door for some additional short-term selling pressure.

Hog markets tried to build off Tuesday’s strength to start the session, but the negative commodity tone, in general, weighed on prices. Hog futures closed at the bottom of the day’s trading ranges, which could bring additional selling pressure going into Thursday’s trade. There is still not a sign that a near-term low is in place, and the market will need additional buying strength and may need to have improved fundamental pictures for that low to get established. The cash trade is still trending lower, but midday direct cash trade did find some support on Wednesday. Morning direct trade was 1.57 higher to 97.47 and a 5-day rolling average of 97.04. The Lean Hog Cash Index continued to slide reflecting the recent cash weakness, losing 1.48 to 103.26. Oct futures are still trading at a 12.185 discount to the index and could limit the downside pressure in the futures.  Retail values turned softer at midday on Wednesday, losing 1.45 to 102.88, which was disappointing after Tuesday’s buying support. Today’s midday load count was moderate at 205 loads. The estimated hog slaughter for today was 483,000 head, up 8,000 from last week and 6,000 from last year, as front-end supplies stay comfortable, impacting the packer demand. The hog market is still in the process of trying to forge a bottom. The market is volatile and has been open to big swings in price. The fundamentals will need to be consistently firm in order for the market to feel more optimism.

DAIRY HIGHLIGHTS: Wednesday’s spot cheese trade saw the block/barrel average surge 7.50c higher. This was the largest up day for cheese since March. With a 9c higher bid in blocks to $1.85/lb and a 6c higher bid in barrels to $1.9350/lb, the block/barrel average closed at $1.8925/lb. There was just 1 load traded in today’s session, showing seller reluctance to move inventory during the session. Additionally, the spot butter trade was bid another 2.75c higher, marking the fourth up day in a row to start the month. Spot butter closed at $3.1475/lb, which is a new all-time high for the spot trade. There were 9 loads traded. With steady bidding in both cheese and butter, both Class III and IV futures rallied Wednesday. October Class III added 25c to $20.34 while October Class IV added 4c to $24.14.