The Bureau of Labor Statistics released the August inflation data on Tuesday morning, and the overall rate of inflation was at 8.3%, and above expectations.  This disappointing number sent most markets into risk-off trade, especially equity markets as the Dow lost over 1200 points on the day.  Within those numbers, retail food prices were 13.5% higher than last year and a big driver in the overall number as energy prices had softened from July into August.  The tighter consumer dollar and consumer spending will be a key piece to the puzzle for the U.S. economy in the near-term. The concerns regarding the consumer will have an impact on demand, and may have been part of the trigger for the selling pressure in the live cattle market.  If the consumer dollar is tight, the U.S. consumer may move away from higher priced items, such as beef, into lower cost proteins like pork and poultry.  The value of the consumer could be a key piece to the puzzle and the support in commodity prices. 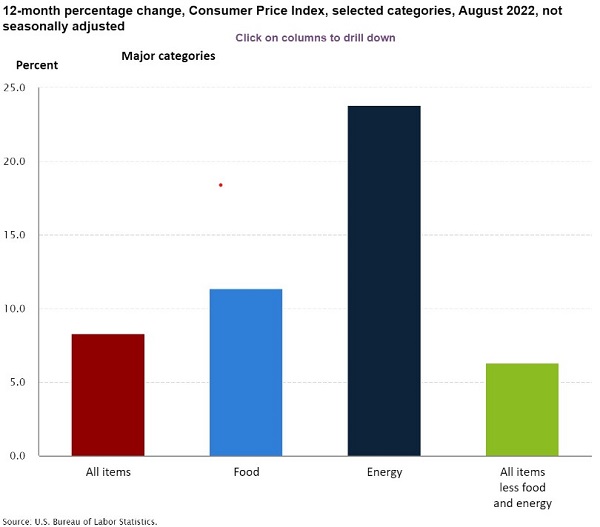 CORN HIGHLIGHTS: Corn futures edged lower following a reversal in soybean prices, closing 3-1/4 lower in September at 7.09. December also gave up 3-1/4 to end the session at 6.92-3/4. A lack of new bullish news and a likely increase in farmer selling kept prices in check today. There was no technical damage to charts today, however, stochastic indicators are in the over-bought territory, suggesting technical selling could develop soon.

Heightened concern supplies will be limited for the northern hemisphere and will underpin prices for now. Yet, new bullish news could be lacking. The key may lie in money flow and whether funds will hold strong net long positions, or if the end is near for the rally as an increase of farmer selling is likely to occur, which could ignite a long liquidation. The mentality that world supplies, as well as U.S., remain precariously low should underpin prices. If the old saying, “small crops get smaller” has merit, then 172.4 bpa isn’t small enough. Projected soybeans carry out for 2022/2023 crop is 200 mb, a very small figure. The idea of declining corn yield in future USDA reports, coupled with tight soybeans supplies, could lead to a fight for acres after harvest. With December 2023 trading at 6.33 and 2022 December near 6.93 implies there is plenty of room for the December 2023 contract to work higher. Ukraine is said to be discounting it’s corn at a rate that makes it very attractive to end users.

While soybeans rallied impressively on Monday after it was revealed that domestic and global supplies were projected to be extremely tight, the rest of the week so far has been plagued with bearish news bringing prices off their highs. Today talk began that the Biden administration may impose sanctions against China in the event of an invasion of Taiwan which would severely hurt soybean export demand to China. US soybeans are currently at a premium to Brazil and Argentina, and as a result of the Argentinian soy dollar, Argentinian farmers have unloaded a huge amount of beans onto the market, of which China has purchased at least 20 cargoes so far. Nov soybeans on the Dalian exchange at the equivalent of $20.68 per bushel. Bean oil was lower today despite higher crude on expectations that China will now only import 5.93 mmt of veg oils compared to 6.6 mmt a month ago. Yesterday’s bearish CPI data continues to hang over the market as well bringing the stock market and commodities lower in anticipation of continued interest rate hikes. Domestic soybean demand remains solid with generous crush margins which are said to be 2.80 per bushel for January. Despite the outside bearish influences, soybean supplies are tight, and any issue with South American production could easily send prices soaring higher. Nov beans have lost some of their gains from Monday but are higher overall and closed 5 cents above their 100-day moving average today.

In the face of lower corn and soybeans, wheat made decent gains today. The market is likely focused on a few different things, with the first being the fact that Russia and Turkey have talks this week to discuss the Ukraine export corridor deal. General sentiment is that Putin will not renew the deal (which expires in late November). Additionally, the railway strike looming this week could greatly impact the movement of grains throughout the country (in addition to other goods). This, coupled with fears of a recession in the US and a high US dollar are offering resistance to the wheat market. Therefore, wheat may remain in a trading range as the market waits for news regarding overall demand vs the possibility of the Ukraine corridor being shut down. It is also worth mentioning that the Biden administration will potentially issue new sanctions against China, who is trying to do all they can to limit raw material imports from the US. Here in the southern Plains, chances of rain next week could help planting conditions. As a final point of note, tomorrow, the market will receive four weeks worth of export sales data – issues with a new reporting system are the cause of the delay.

Choppy trade in the cattle market as the prices were looking for direction. Fundamentals were mixed on the day, and the market was cautious of outside market signals. The weak overall market tone and concerns regarding the consumer spending may keep pressure on the cattle market in the near-term.  Cash trade was still developing this week. but bids were trending $140-141for southern live trade and $224-227 for northern dress trade, steady with last week.  Packer inquiry will pick up as we move closer to the end of the week.  Expectations are for cash prices to be steady this week and packers are still looking for higher quality grades of beef. Retail values were lower on Wednesday, which limited gains.  At midday, choice carcasses dropped 2.46 to 254.20 and select was 2.77 lower to 230.81 The load count was light at 123 midday loads. With choice carcasses trading at 254.00, this is the lowest the choice carcass has traded since May 11.  Retail prices have been a key support for cattle prices, so this weakening trend will be closely watched.  Today’s slaughter totaled 126,000 head, 2,000 below last week, but 7,000 head greater than a year ago. The feeder market found some support and consolidated after yesterday’s weakness as corn prices pulled back off recent highs.  The Feeder Cash Index has also trended lower recently. Sept feeders were trading at a small discount to the index and may keep Sept tied to the index value, expiration is around the corner. The picture in cattle markets is a little cloudy at this time.  Outside markets and macro-economic concerns have the cattle market nervous if the U.S. consumer demand were to slow.  Longer-term fundamentals are still supportive in what looks to be a choppy market overall.

October hogs consolidated at the top of Tuesday’s strong trading day, retesting and holding support at the 50-day moving average.  The livestock markets in general feel cautious of the outside markets after Tuesday’s sharp drop in equity markets tied to the inflation rating being larger than expected.  Concerns over the consumer and demand for both beef and pork will likely keep the market cautious.   In addition, the hog market still needs to find some stability in the cash market before a turn higher can truly occur, but the strong price action overall this week is still encouraging. The cash trade is still trending lower, but midday direct cash trade saw no comparison to yesterday’s confidential trade, but weighted average prices were higher at 97.02, and the 5-day rolling average was improved to 93.93. The Lean Hog Cash Index continued to slide, reflecting the recent cash weakness, losing .62 to 97.67. Oct futures are still trading at a 2.970 discount to the index. In direct cash trade, October is at a premium, and the weak cash tone is still a concern to the market. Retail values were the bright spot and were firmer at midday, gaining to 105.15. Today’s midday load count was moderate at 146 loads. The USDA will release updated export sales numbers for the first time in a month on Thursday, and that could help direct the market into the end of the week. The estimated hog slaughter for today was 484,000 head, up 1,000 from last week, and 12,000 over last year. The front-end supplies have stayed heavy, which has made it difficult for the cash market to find footing. The hog market looks to have made the turn higher starting last week, and the strong price action overall this week has helped build that potential low is in place.  Hog supplies will be looking to tighten, but concerns regarding food inflation and consumer demand may be a limiting factor.

DAIRY HIGHLIGHTS: Spot butter prices fell over three cents today, the first time lower in September, while spot block cheese rose 6 cents leading to mixed results in the milk markets. Second month Class III and IV prices continue on an upward trend after touching contract lows for 2022 in early August being strengthened on the backs of active cheese and butter markets. While nearby milk contracts saw modest gains and losses today, 2023 prices were relatively bearish with most months seeing losses from 10 to 20 cents. The large cheese inventories are the elephant in the room that could cause milk futures to tumble, but the USDA continues to report export demand out of the Northeast is strong while Midwest manufacturers are reporting tightening supplies coupled with retailers starting to plan holiday purchasing. The strong export demand could be linked to tight European milk supplies creating tighter cheese inventories.