Though not a heavily traded and watched market, oats futures recently traded to new contract highs, and are poised to possibly challenge all-time price highs. As a feed grain, oats are lightly traded, but the impact of this summer’s weather has the market looking to trade towards the all-time high of $6.00 a bushel set in March of 2014. The most recent Statistics Canada number released for September dropped the production estimate for Canadian oats to 2.579 mmt, the smallest production since 2010. This low production was a result of production issues due to drought conditions on the Canadian prairies this summer and a drop in harvest acres, as more than normal acres were salvaged for feed use. In addition, U.S. production was forecasted to be at historical lows, dealing with the same conditions, and oats losing the acres battle to other crops. This type of supply has had oats futures on a nearly $2.00 rally since the start of the year. Food inflation has been a hot topic on the radar in 2021, and the rise in oat prices to historical levels will only add to the food price concerns. 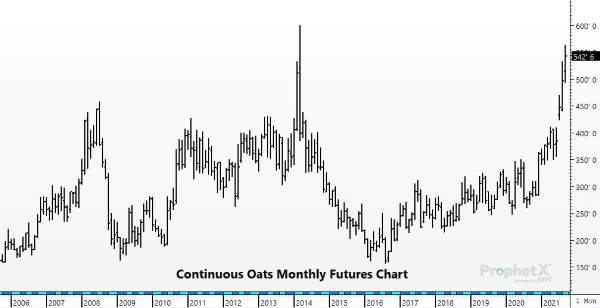 CORN HIGHLIGHTS: Corn futures closed softer losing 2-1/4 cents in Dec finishing the day at 5.27-1/2. For the week, Dec gained 9-3/4 cents. Dec 2022 futures closed the week at 5.03, gaining 1-3/4 cents from last Friday. An increase in harvest pressure is expected in the weeks ahead and likely was responsible for prices giving back some of their gains from earlier in the week. The 6 to 10-day forecast generally shows a warm and dry pattern which means farmers will be headlong into harvest in short order. Early yield results are mixed up. Parts of Illinois may have received too much moisture which may be contributing to disease issues. It is early enough in the harvest season that we want to be careful not to draw conclusions for the entire crop, yet we also want to be observant of early patterns. End users still appear to be more hand to mouth in their purchases. Export sales were not very active this week. From a big picture perspective, the next key reports are the quarterly stocks at the end of September and the October Supply and Demand report due for release on October 12. Just as important will be weather developments in the Southern Hemisphere. Current dry weather could mean planting delays.

SOYBEAN HIGHLIGHTS: Soybean futures ended the week with losses of 9-1/2 to 12 cents with Nov leading the way lower closing at 12.84. For the week, Nov lost 2-1/2 cents. Expectations for harvest to pick up steam in a major way over the next one to two weeks may have had prices on the defense this week. The most recent near-term weather forecast indicates below-normal precipitation for most of the Midwest. Another announced export sale to China was noted today but the total was less than 5 mb, which is welcomed news. Yet, we are not seeing significantly large orders and with harvest now the dominant feature, prices will likely struggle to move higher unless there is positive news. World vegetable oil including palm oil continued to hold strong, yet may have seen their peaks as today both experienced setbacks. Add to that, this week’s crush report showing higher than expected soybean oil stocks and futures struggled by end of week. Attention will focus on harvest, the Stocks report on September 30, as well as the October Supply and Demand report.

WHEAT HIGHLIGHTS:  Wrapping up the week, Dec wheat gained over 20 cents for the week despite losing 4-1/4 cents today, closing at 7.08-3/4 and March down 4-1/2 cents as well closing at 7.19-3/4. KC Dec contracts traded a little lower closing down 7-1/2 cents, closing at 7.13, and March gaining 7-1/2 cents closing at 7.21-3/4. The weather map shows rains in parts of Washington & Kansas, however, many areas still need more moisture for better planting conditions next week. The northwestern Plains still have no change and are drought-ridden. SRW wheat prospects in the eastern and southeast Midwest are for the most part in good standing for planting next week, with scattered showers in the forecast. Globally, there is still a lot of uncertainty as to just what the production numbers will look like. Australia is still expected to do well this year but is turning too dry, and that situation needs to stay monitored. Argentina is expected to turn extremely dry as the effects of La Nina are expected to take effect. The big question still remains around the Russian crop. Russia’s Ag Minister projects the crop at 69.5 mmt compared to the USDA 72.5 mmt. However, other Russian Ag agencies this week predict a crop somewhere between 74-76 mmt. Harvest is over 70% complete so there should be some resolution to that question sooner than later.