The wheat market strength helped lift the entire grain complex on Tuesday as wheat futures posted strong gains.  Front month wheat futures contracts recorded 50-60 cent gains on Tuesday, triggered by news of Russia looking to have votes for the possible annexation of territory claimed as part of the Russia-Ukraine war.  The market was nervous that an attempt for this referendum would escalate tensions in the region, further limiting potential grain production and exports.  Such a move by Russia would likely trigger additional sanctions toward Russia and destabilize the area further.  The concerns of this occurring triggered a strong round of short covering in the wheat market, as fund positioning has been holding a moderate short position over the past weeks.  The rally on Tuesday saw Chicago wheat futures trade at its highest price levels since early July. 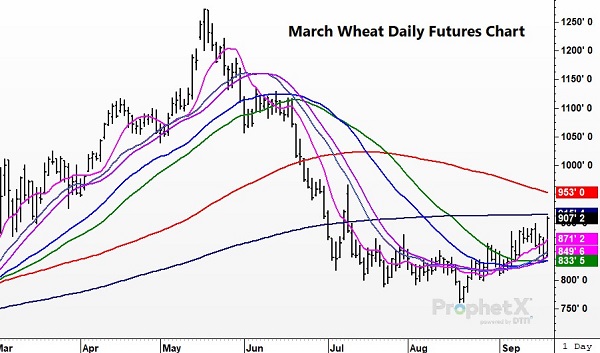 CORN HIGHLIGHTS: Corn futures rallied into the close following sharp gains of over 60 cents in the wheat market as concern the war in Ukraine could escalate. December 2022 added 13-3/4 cents to close at 6.92, it’s highest close since September 12. December 2023 added 9 cents to close at 6.31. Expectations for higher interest rates in the U.S. this week and elsewhere in the world could have traders buying commodities on the idea that equities continue to struggle, and commodities are a hedge against inflation. The Dow Jones was down near 500 points as of the writing of this report. Lastly, crop ratings took another step backwards with the poor and very poor categories now at 20%. Visually this is driving past five fields and one is not good, suggesting a national average yield of 172.5 may be optimistic.

China reducing some lockdown cities may have added some spark to corn futures, as well as did some private analysts suggesting the China corn crop may not be as big as the current USDA estimate of 274 mmt. In August, the USDA raised the China crop 3 mmt. Soybeans also closed on a strong note with double digit gains as soymeal continues to move higher and score new contract highs. Friday’s Commitment of Traders report also indicated managed money continues to add to long corn and are now net long over 240,00 contracts, more than double the totals from late July. Our best guess is they have added more since a week ago when the numbers are compiled. (COT is released on Friday with computation through the previous Tuesday).

SOYBEAN HIGHLIGHTS: Soybean futures closed higher today following the release of crop progress, but perhaps more influential was the massive rally in the wheat complex that pulled the rest of the grain complex higher. Despite lower crude, both bean oil and meal were able to close higher as well. Nov soybeans gained 17-1/2 cents to end the session at 14.78-3/4, and Jan gained 17 to 14.84-1/2.

The entire soy complex closed higher today and most of the gains can be attributed to the huge run higher in the wheat complex that brought both corn and soybeans higher. Apart from that, strong domestic demand has been supportive, as well as good export demand. According to the crop progress numbers, 3% of the crop is harvested compared to 5% on average, and 42% of the crop is dropping leaves compared to 47% on average. Chinese soybeans on the Dalian exchange are trading at the equivalent of $20.13 per bushel in November and have been active importers from both the US and South America. In the past few days, China is reported to have bought at least 10 cargoes of Argentinian beans, which are at a 40-cent discount to US beans. China’s customs department reported that Chinese imports of soybeans have fallen to 7.17 mmt in August, down 25% from a year ago, and US beans to China were only 287,000 mt for August. China will need to continue buying US beans to keep the market supported, and now with many of the Covid lockdowns being lifted in major Chinese cities, demand may pick up. Soybean inspections last week were 19.1 mb, much higher than the previous week’s 10.3 mb, and total shipments are now 33.5 mb vs 18.5 mb the previous year. Domestically, demand remains strong with good crush incentives and the USDA reporting gains of 42 cents in crush values in Iowa. Nov beans remain in an upward trend with a gap on the chart higher to fill at 15.37.

It was a banner day in the wheat market, as it led the grains higher. Early on there was not much news to drive this rally, but talk that Russia is looking to annex parts of Ukraine may have played a part. The concern is that this will escalate the war and reduce or cutoff Black Sea exports. Russian wheat prices are currently cheaper than the US, so this could be a big deal. Paris milling wheat futures also jumped today; the December contract gained 13.50 euros (per mt) and is now on the higher end of the sideways range. Here in the United States, winter wheat planting is 21% complete (vs 17% average) and the spring wheat harvest is 94% done. This week, the Fed meeting is also taking place, in which they are expected to raise interest rates another 75 basis points. There is a chance that they could issue a 100 basis point increase, however. The market will be paying attention to this because while it may combat inflation, it could also lead to recession and ultimately impact demand for commodities.

CATTLE HIGHLIGHTS: Live cattle futures were mixed as the cash market was still slow to develop, and strong selling pressure in the feeder cattle market due to higher grain prices limited gains on Tuesday. Oct cattle gained .575 to 146.300 and Dec cattle traded .175 higher to 151.075.  October feeders traded 2.275 lower to 180.025.

October and December live cattle futures were choppy during a relatively quiet session again on Tuesday as softened off session highs.  Prices are poised to push through the topside, but the market will need positive news to trigger the potential strength, and that may take a strong cash tone on the week. . The October and December futures traded through the August price highs at 146.250 for October and 151.775 for December, before falling back at the close. The strong selling pressure in the feeder market triggered some profit taking in the live cattle market at the end of the day.  Price action was weak on the close and could bring additional selling pressure on the session open on Wednesday.  The cash market was undeveloped for the week as a few $145 bids were in front of the market.   Expectations are for cash prices to be steady to higher again this week. Today’s slaughter totaled 128,000 head, even with last week, but 6,000 greater than a year ago. This week will give the market the next round of cattle on feed numbers with the September report to be released on Friday after the market close. Expectations for the report are to show total cattle on feed at 100%, placements at 98.1 % and marketings at 105.9% compare to last year’s totals.  Retail values at midday were mixed with choice carcasses trading .61 lower to 251.84, but select gained 1.82 to 227.71. The load count was light at 83 midday loads. The choice/select spread stays wide at $24.13 at midday, reflecting the strong demand tone for Choice beef still in the market.  The feeder market closed below support as a strong rally in grain markets triggered selling in the feeder futures. The October contract closed under the 100-day moving average, which could trigger additional selling pressure on Wednesday’s open. The Feeder Cash Index found some strength to start the week gaining .28 to 178.20. Sept feeders were trading at a small premium to the index and may keep Sept tied to the index value, expiration coming for Sept options and futures on 9/29. Overall, the high prices in the grain market have put pressure on the feeder cattle market in general and the price surge on Tuesday triggered additional selling in the feeder futures..  Direction this week will likely be tied to the cash market tone, and expectations of the cattle on feed report on Friday. Cash may be losing it strength with the strong grain market move and the selling pressure in the feeder market. The concerns regarding outside market weakness may limit cattle market gains and the Fed meeting this week could keep things volatile.  Equity futures were strongly lower on Tuesday, which may have spilled over into the selling momentum.

LEAN HOG HIGHLIGHTS: Lean hog futures were mixed to mostly higher, supported by technical buying and the anticipation that the cash hog market may be starting to find some footing.   Oct hogs were .500 lower to 95.975, but Dec hogs gained .025 to 88.175.

Hog futures were higher overall with the exception of the front month October contract.  The market is bear spreading, building longer-term premium as the prospects of tighter supplies supports the deferred futures. The hog market is anticipating a firmer cash market tone. The Lean Hog Index looks to be building a turn higher trading slightly higher again on Tuesday, adding .45 to 98.42.  Oct futures are trading at a 2.445 discount to the index. In looking at deferred futures, December hogs are trading at a 10.245 discount to the index, which will likely support the futures.  Midday direct cash hog trade was firmer gaining 4.31 to 94.26 with a 5-day average of 94.18.  The market will be hoping this is the turn higher in cash markets the futures prices need.  Retail values were strong again on Tuesday gaining .57 to 105.88. Today’s midday load count was good again today at 195 loads as demand looks supportive.  Chinese hog prices are trending higher, and the pickup in demand could be due to export interest also picking up. The estimated hog slaughter for today was 485,000 head, up 9,000 from last week, and 22,000 over last year. The front-end supplies have stayed heavy, which has made it difficult for the cash market to find footing overall. The hog market looks to have made the turn higher and holding that strength to start the week was important.  Hog supplies will be looking to tighten, and prices are looking supported to test higher levels, especially in long-term deferred futures, posting new high again today for summer 2023 hogs.

DAIRY HIGHLIGHTS: Milk, grain, heating oil, and hog futures were all higher on Tuesday as buyers supported a strong rise in commodity prices. This took place just one day before the Fed will make its decision this month on rates. Expectations are that rates could rise another 75-basis points, in an effort to curb inflation. The Dollar is rallying higher ahead of the announcement as it closed up nearly 50 points higher today to within reach of a new multi-year high. The grain trade was led higher by wheat up 63.25c in the December contract. December corn tacked on 13.75c to $6.92 while November soybeans added 17.50c to $14.7875 per bushel. The dairy trade received support from another strong day of bidding in the spot cheese market. Spot barrels were bid 6.75c higher to $2.17/lb while blocks held steady at $2.0525/lb. Cheese prices continue to rise despite growing inventories and stronger milk production. The USDA said yesterday that milk production in August rose 1.60% from the same month last year. They also said cow numbers rose 8,000 head from July to August.