The U.S. Dollar Index exploded to a new 20-year high on Wednesday following the Fed statement raising the core interest rates.  Fed officials raised interest rates by 75 basis points as expected for the third consecutive time.  The Fed is staying aggressive in trying to control the rate of inflation and trying to move the inflation rate back to 2%.  In addition, the Fed sharply raised rate projections, seeing the Fed funds rate to 4.4% by the end of 2022, and 4.75% for 2023.  This keys the tone of a tighter monetary policy clearly in front of the market.  The U.S. Dollar Index is not trading at 20-year highs, matching the level of July 2000.  The impact on other markets will still need to be seen, but the strong U.S. dollar will likely have an impact on the cost of U.S. goods for importers. 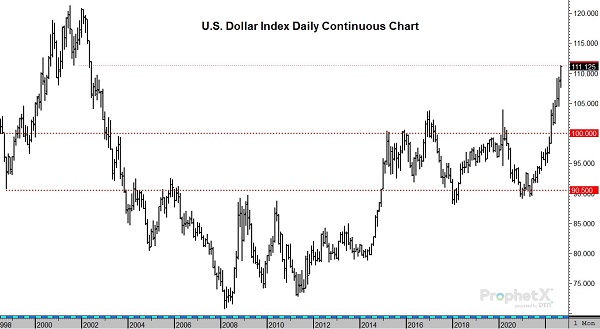 CORN HIGHLIGHTS: Corn futures ended lower giving up 6-1/2 cents in December to close at 6.85. December 2023 lost 3-3/4 to end the session at 6.27-3/4. Corn followed soybean prices lower. Futures did rally in the am session, reaching a high of 6.98-1/2 and potentially scoring a double top with last week’s high of 6.99-1/2. We would not be surprised if farmer selling picked up just under the 7.00 mark. Yet, in conversation with buyers, it seems farmer selling remains light despite a significant price recovery since July. A lack of new news to support prices was noted today. In addition, the U.S. dollar surged into a new contract high.

A lack of carry, or in the case of comparing December futures verses July where prices are inverted (December = 6.85-1/2, July = 6.84-1/2), the market is encouraging producers to sell now. This is usually a function of tight supply, strong demand, or both. We are not convinced farmers are carrying much old crop corn in storage and the pipeline is relatively empty into the harvest season. The implication is a likelihood cash will lead prices higher as it has since 2019. Expect firm basis levels after harvest. For now, the market will move on yield results and outside influences, such as export sales, the U.S. dollar, and the war. The crop size is what it is. Fine tuning will come from producer feedback. Our expectation is that some of the crop will be the best farmers have ever produced. Much of the crop will be variable and with 20% rated poor to very poor we would expect another downgrade to yield.

SOYBEAN HIGHLIGHTS: Soybean futures closed lower today following the Federal Reserve’s announcement of another 75-basis point hike and the potential of more to come, as well as favorable weather forecasts to kick off the harvesting season. Nov soybeans lost 17-1/2 cents to end the session at 14.61-1/4, and Jan lost 17-1/2 to 14.67.

Unlike yesterday where higher wheat supported both corn and soybean prices, today, Nov beans gave back all their gains from the day before. Prices were higher earlier in the day, but began selling off at the open in anticipation of the Fed’s rate hike announcement, which came in as expected at 75-basis points, and based off what Chairman Powell said at 1:30, it appears as though the Fed may begin easing these hikes next month if CPI and other data shows signs of calming. The announcement, which came after grain markets closed, initially sent the stock market barreling lower before recovering after Powell’s comments on next month’s meeting. A delegation from Taiwan signed a letter of intent in Iowa to buy 100 mb of soybeans between 2023 and 2024, as well as some corn, a deal valued at 2.6 billion dollars. International demand for US beans has been good, but with China’s recent mass purchase of Argentinian beans that were hastily put on the market only time will tell if Chinese interest in US soybeans remains as strong as it was. Domestically, demand for soybeans remains high, and October meal scored a new contract high today further increasing the crush margin. Weather in the Corn Belt is forecast to be mild and dry over the next two months giving harvest a chance to advance at a quick pace, and although there will likely be harvest pressure, there are still bullish underlying fundamentals that could keep prices supported. Nov beans wiped out all of yesterday’s gains to the penny but remain in an uptrend with a close above the 100-day moving average.

After trading both sides of steady, by the close of trading, wheat was higher (but off of daily highs). Bull spreading was noted in the Chicago contract, which may indicate near term supply concerns. This itself may be tied to the Ukraine war, in which Putin announced referendums to annex some of Ukraine’s eastern areas (essentially putting about 15% of the country under Russian control). Additionally, Russia is mobilizing 300,000 additional troops, which raises concern about wheat and corn exports out of the region. Here in the United States, drought issues in the southern Plains are still on the minds of many as they provide bullish support to the market. In other news, the FOMC issued another interest rate increase today of 75 basis points. Additionally, the US Dollar is again making new highs, breaching the 111.00 mark. These factors, along with general global economic concerns, may offer some resistance to the market.

CATTLE HIGHLIGHTS: Live cattle futures were lower as the markets were waiting for cash news and watching the outside markets for direction with the Fed interest rate policy. The feeder cattle markets saw additional technical weakness as the selling pressure continued. Oct cattle slipped .425 to 145.875 and Dec cattle traded .325 lower to 150.750.  October feeders traded .800 lower to 179.225.

cattle futures faded off early session highs as the cash market was slow to develop this week, and caution in the outside markets limited the cattle market on Wednesday. Additional selling pressure in the feeder market triggered some profit taking in the live cattle market at the end of the day.  Price action was weak on the close and could bring additional selling pressure on the session open on Thursday, especially as the market is looking towards the Cattle on Feed report on Friday afternoon.  Expectations for the report are to show the total cattle on feed at 100%, placements at 98.1 % and marketings at 105.9% compared to last year’s totals.  If realized, the placement number will be the sixth consecutive month lower than the previous year’s estimates. The cash market was undeveloped for the week as a few $145 bids were steady with yesterday.  Expectations are for cash prices to be steady to higher this week and trade will likely start building tomorrow. Today’s slaughter totaled 127,000 head, 1,000 above last week, but 7,000 greater than a year ago. Retail values at midday were mixed with choice carcasses trading 1.57 lower to 250.07 but select gained .36 to 227.59. The load count was light at 119 midday loads. The recent weakness in choice beef carcasses is concerning and could be a pressure in the market overall. The feeder market closed below support as the feeder market failed to rally, despite the weakness in grain.  With a second consecutive close under the 100-day moving average, the October contract may be eyeing support near 177.00.  The Feeder Cash Index is trading relatively steady with the Sept feeder contract with expiration right around the corner on the 29th. The market is still waiting for cash trade to begin to develop but has pulled in line with recent bids.  The concerns regarding outside market weakness may also help limit cattle market gains as the cattle market will be preparing for Friday’s Cattle on Feed report.

Hog futures have had strong gains in recent sessions, and with outside market concerns a possibility, saw money flow move to the sidelines on Wednesday.  The Fed interest rate announcement has lifted the U.S. dollar to new 20-year highs and pork export demand is a key piece of the pork pricing puzzle.  The recent strength in the hog market has come from the hog market anticipating a firmer cash market tone. The Lean Hog Index looks to be building a turn higher despite trading slightly lower, losing .06 to 98.36.  Oct futures are trading at a 3.935 discount to the index.  Midday direct cash hog trade was firmer, gaining 1.02 to 95.28, with a 5-day average of 93.65.  Retail values were under pressure on Wednesday, adding to the selling pressure.  At midday, pork carcasses traded 4.58 lower to 100.37, breaking the most recent price strength. Today’s midday load count was moderate at 153 loads. The estimated hog slaughter for today was 484,000 head, even with last week, and 14,000 over last year. The front-end supplies have stayed heavy, which has made it difficult for the cash market to find footing overall. The hog market looks to have made the turn higher, but may be due for some pullback, especially is retail values were to soften in the near-term.  Hog supplies will be looking to tighten, and prices are looking supported to test higher levels, but some price softness tied to outside markets may limit the near-term.

DAIRY HIGHLIGHTS: Class III and IV milk futures pulled back on Wednesday from a softening dairy spot trade along with uncertainty as to what the Fed would do with interest rates. Class III participants may be getting a bit concerned with the current spread in cheese blocks and barrels. Blocks fell 2c today to $2.0325/lb while barrels added 0.50c to $2.1750/lb. With the spread now up to 14.25c, there may be worry that barrels can’t continue much higher without block demand. At any rate, the cheese trade today took the block/barrel average down to $2.10375/lb, which is still a strong price historically. Meanwhile in the butter trade, the spot market has closed lower in five out of the past seven sessions after hitting new all-time highs on September 13th. Since its $3.24/lb peak, butter is down 12.25c. At 1pm CST, the Fed announced that interest rates would rise 75-basis points, as expected. This pushed the US Dollar Index higher, up over 100 points at one point today to new multi-year highs.